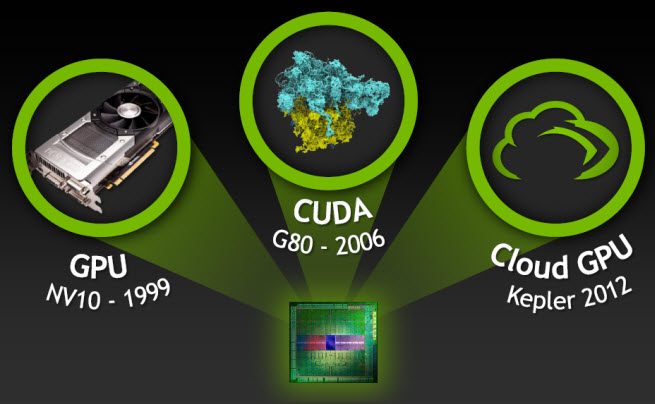 Nvidia announced today that it has created unique features in its Kepler-based graphics chips that could make cloud-based gaming much more practical. The company has also formed partnerships with companies such as Gaikai to make cloud games much cheaper and more appealing to gamers and maybe even eliminate the need to create a new generation of consoles.

That latter possibility may be a remote one for now, but the fact that it is possible suggests the potential disruption that could occur if Nvidia executes its vision for cloud gaming: Multi-brained graphics chips in data centers will be able to handle computing tasks for home players.

Jen-Hsun Huang, chief executive of graphics chip maker Nvidia, made the announcement today in his keynote speech today at the GPU Technology conference in San Jose, Calif. The cloud graphics announcement was one of several that Huang made today.

In an interview with GamesBeat, Nvidia senior vice president Dan Vivoli said Kepler-based graphics chips will be able to handle four times as many server-based games at the same time while using half the power and running at half the cost.

“The beauty of this approach is that GPUs will continue to improve all of the time,” said Vivoli. “Your hardware stays the same, but the data center hardware can be upgraded to handle better games.”

Game streaming companies such as OnLive, Gaikai, and Otoy have introduced cloud infrastructures in the past few years that enable users to play high-end games on low-end hardware. The serious computing is handled in the data center, and video is streamed to the user’s computer, where only a display is needed to view the game. Servers in the data centers can use high-end graphics cards to handle high-end games, but it usually takes one expensive graphics card to process one game being played by one user. 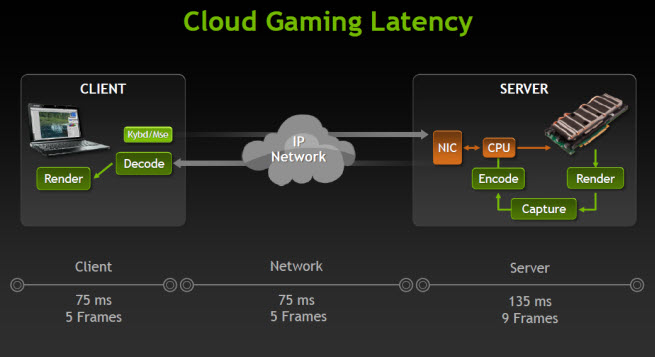 The Kepler-based chips have also been designed to reduce the latency, or time it takes for an interaction between computers, for cloud gaming. That means that there won’t be a perceptible delay in playing cloud games.

“You might play a game in the cloud and have a better response time than the console,” Vivoli said. “Our architecture is so fast we can hide the latency of the network.”

Nvidia is partnering with Gaikai, which has 24 data centers in the U.S., to help reduce network latency. Nvidia is building a grid-based computing platform, dubbed Nvidia GeForce Grid, for Kepler-based machines to access. Together with cloud graphics software, the Nvidia GeForce Grid will be enable cloud-gaming companies to operate with lower operating costs, said Phil Eisler, general manager of cloud graphics at Nvidia. 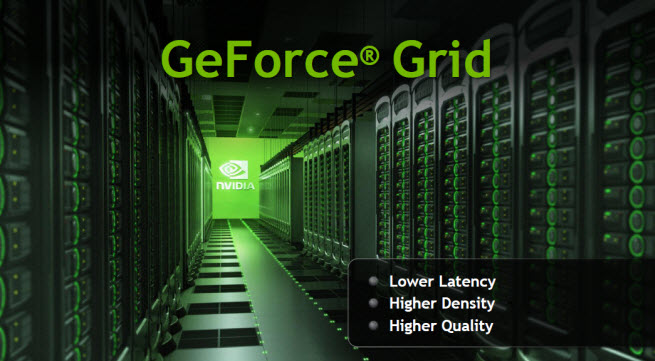 At the conference, Nvidia and Gaikai demonstrated a virtual game console, consisting of an LG Cinema 3D Smart TV running a Gaikai application connected to a GeForce Grid GPU in a server 10 miles away. The demo showed it was possible to create instant, lag-free play on a highly complex PC game, with only an Ethernet cable and wireless universal serial bus game pad connected to the TV. The partners said they could stream a game to a user in less than 10 milliseconds. That means a user wouldn’t notice delays.

Time Sweeney, chief executive of Epic Games and a well-known graphics expert, said, “Cloud has the potential to deliver an even more powerful experience in the future by enabling ultra-high-end GPUs like the GeForce GTX 680 to stream ultra-high-quality graphics such as those made possible by Unreal Engine 4 to a huge range of devices, well beyond console capabilities. The result will be that more people can enjoy Epic’s games on more devices at higher quality.”

Cloud-based games have other benefits. Users can log into a game on one computer and continue playing on another.

“You will have the access to the latest and greatest GPUs (graphics processing units),” Vivoli said. “The question is what consoles will be in a few years. It becomes a lot easier to deal with piracy with cloud gaming.”

Vivoli said that the cloud-based graphics will create more disruption in the game industry, and they could enable new business models for game companies and console makers. You could, for instance, play high-end games on a TV that has no console hardware. Or you could play high-end games on an iPad that might not ordinarily be able to run them. Vivoli said this is the biggest change in graphics chips since Nvidia introduced the GeForce 256 graphics chip a decade ago and since the 2006 introduction of CUDA, which enabled graphics chips to perform general-purpose computing tasks.

In addition to cloud graphics, Nvidia is announcing some other changes that will get more performance out of each GPU. With Hyper Q technology, Kepler-based GPUs will be able to handle 32 tasks at a time, compared to one task for the previous generation of Fermi graphics chips. Now it will be much easier to keep a GPU’s different cores busy.

Nvidia will also launch a feature called dynamic parallelism, which divides processing tasks into bite-sized chores that improve the efficiency of the processing. It enables better utilization of the GPU.

Nvidia will also release two new Tesla graphics cards (the K10 and K20) for high-end workstations. One of those, the K20, will go into the Oak Ridge National Laboratory’s Nvidia-based supercomputer.

The makers of virtualization software have been able to modify their software to virtualize graphics technology. Now, using Nvidia’s enterprise-focused Nvidia VGX platform, enterprise servers can use high-end graphics processing and allow enterprise clients to tap into that graphics power. Using virtualization software such as Citrix or Xen, the user can now access high-end graphics software using a low-end client. That enables a new kind of remote computing, where an engineer could access complex engineering drawings using an iPad.

“We’re now able to create enterprise level graphics or virtual graphics,” Vivoli said. “You can access enterprise software with your iMac at home, and it will run as if your machine was a Tesla workstation.” 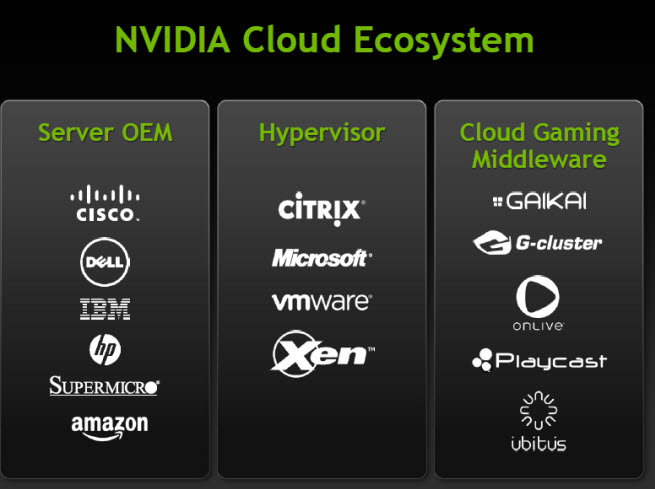