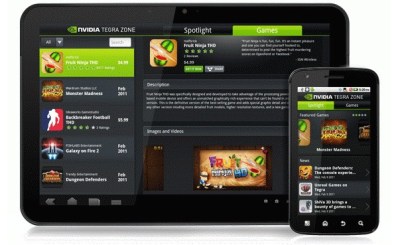 Now that Android devices featuring Nvidia’s powerful dual-core Tegra 2 chip are finally making their way to consumers, the company has launched its Tegra Zone app to feature games that can take advantage of the beefy hardware.

Tegra Zone still points users to Google’s Android Market to download games, but it serves as an easy way for Nvidia to show off content that’s specifically catered to its Tegra 2 chip. Games enhanced for the hardware sport features like better quality graphics, including higher resolution textures and complex lighting; more interactivity, thanks to the ability to display more characters on screen; and improved artificial intelligence.

While Nvidia is only featuring games at the moment, Tegra Zone could potentially serve to highlight other types of apps that take advantage of the Tegra 2 hardware, including high quality video streaming apps, as well as apps that rely on 3D similar to Google Earth.