These are the first consumer graphics chips and their accompany cards that can handle processing for real-time ray tracing, a rendering technique that traces the paths of rays of light to create highly realistic animations to power games and other interactive animations. As a graphics architecture, Turing is a foundation for a whole series of graphics chips that Nvidia can introduce in the coming years. 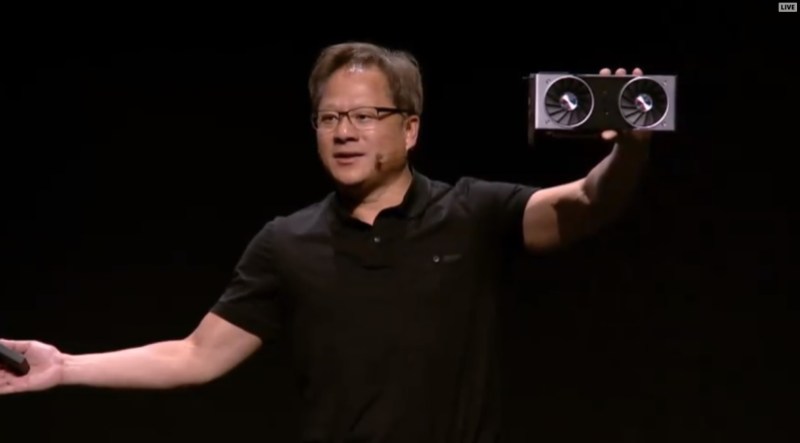 In several demos, Nvidia showed what games will look like with real-time ray tracing. It will add realistic shadows and lighting to games that otherwise seemed like they looked really good. The new Turing graphics cards have six times the performance of the previous generation Pascal chips.

“Games will never be the same,” said Nvidia CEO Jensen Huang in a speech at Nvidia’s event ahead of the Gamescom event in Germany. “Computer graphics has been reinvented.” 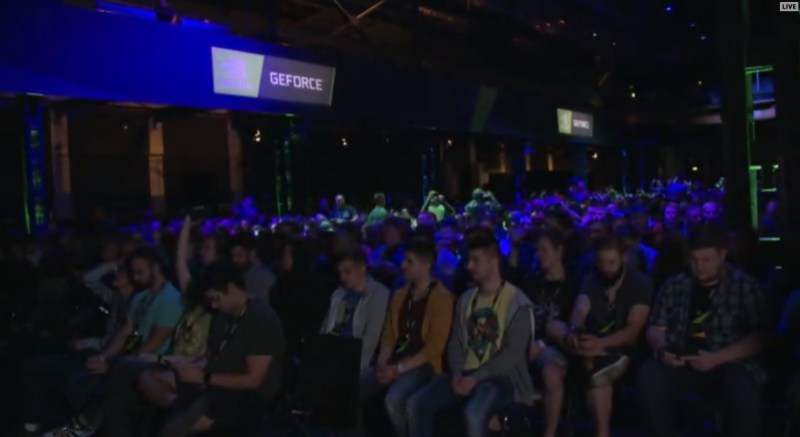 Huang heralded the development as a milestone for creating photorealistic imagery with proper shadows and lighting in real time, for applications such as high-end games and computer-aided design. Graphics experts have been working on real-time ray tracing since the 1970s.

Huang made the announcement in a keynote speech in Cologne, Germany, where the Gamescom, Europe’s biggest gaming event with hundreds of thousands of attendees, is being held this week.

“This is a historic moment for computer graphics,” Huang said in front of a big crowd.

Last week, Nvidia announced its Turing-based Quadro RTX series chips would ship in the fourth quarter, and Huang said it would revolutionize the work of 50 million designers, engineers, and artists with hardware-accelerated ray tracing, AI, advanced shading, and simulation processing. 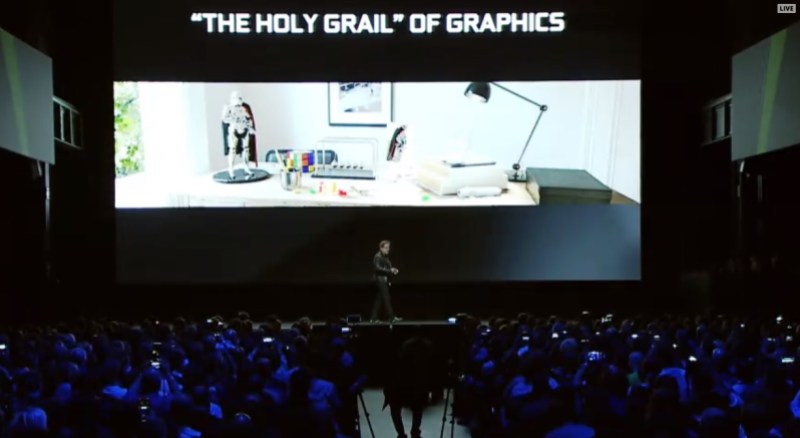 Above: Nvidia’s Holy Grail of graphics at Gamescom 2018.

In the past, graphics cards couldn’t do ray tracing in real time with things like reflections, which are the result of rays of light bouncing around a scene. Huang pointed out that light bounces around and diffuses in different ways that have to be precisely captured. 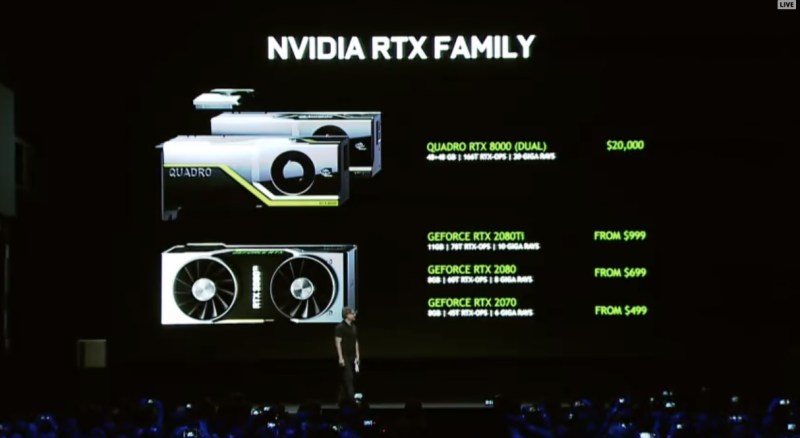 This means that current games are going to run faster, and it also means that new kinds of games with real-time ray tracing will be able to deliver movie-like effects in 4K resolution.

The techniques include ambient occlusion, subsurface scattering, and many others that are captured in real-time ray tracing. Turner Whitted published the first paper on ray tracing in 1979. It took 1.5 hours a $1 million VAX computer to render a rudimentary ray tracing image at that time. 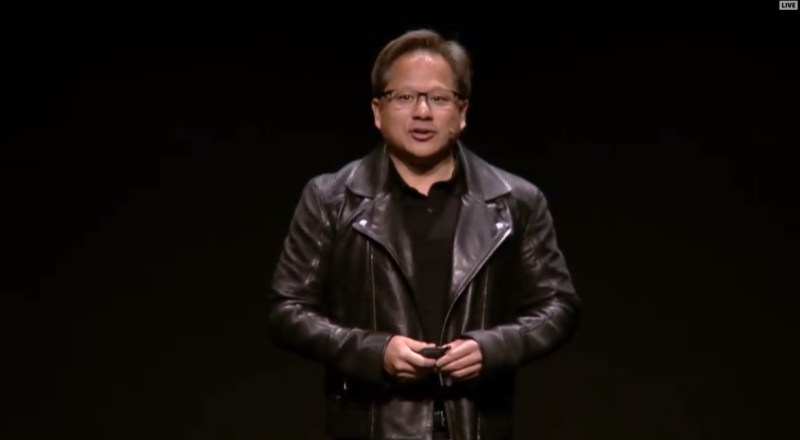 Graphics processing units, or GPUs, have been moving forward since 1990 at a rate of improvement of 10 times the rate of Moore’s Law (doubling every two years), Huang said. It would take another 10 years to get from teraflops to petaflops in performance based on Moore’s Law advances.

“We didn’t want to wait that long, so we invented the Nvidia RTX,” Huang said. “Ray tracing on a brute force level won’t get us there unless we use this technology [the industry] discovered six years ago called deep learning.” 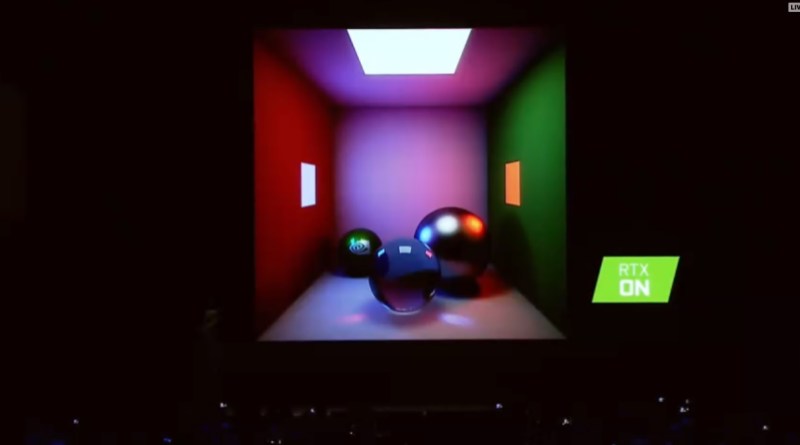 Nvidia is leveraging deep learning artificial intelligence in its RTX series, and Huang said the most powerful lever the company can use in speeding up Moore’s Law is architecture, or the underlying design of its graphics chips. Nvidia also worked with Microsoft, Industrial Light & Magic, and Epic Games to integrate RTX into their tech and create a real-time ray tracing demo, the Star Wars Stormtroopers.

The demo has reflections of reflections and soft shadows, and it requires a massive amount of graphics processing. It took four Tesla V100 graphics cards in a $68,000 supercomputer (or 3,000 easy payments of $19.95, Huang said), the Nvidia DGX, to do the real-time ray tracing demo at 20-something frames per second, Huang said.

A Turing-based chip can do the same thing, Huang said. There are 18.9 billion transistors in Nvidia’s first Turing chip, which features the hybrid rendering of a few types of processors. In can do in 45 milliseconds what the prior generation, Pascal, could do in 308 milliseconds. 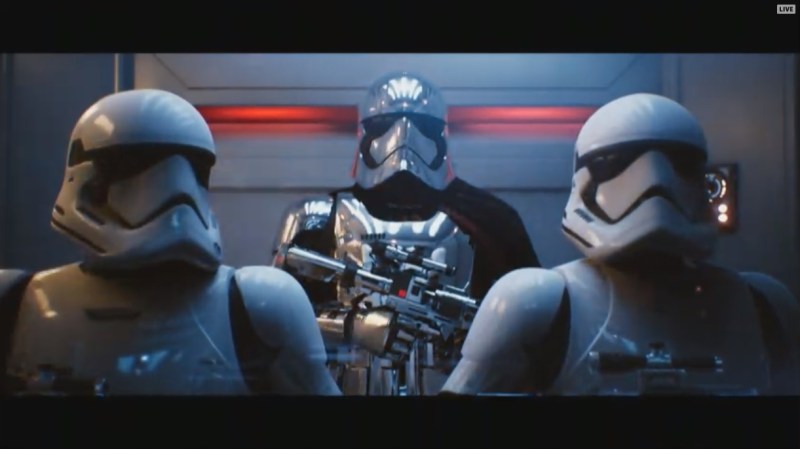 Above: Nvidia’s real-time ray tracing demo with Captain Phasma. It has reflections of reflections and soft shadows.

Turing has lots of Turing SM, Tensor Core, and RT Core subprocessors — or three different kinds of subprocessors that can do a lot of work in parallel. The RT Cores alone can do 10 Giga Rays of processing per second, or 10 times an older Nvidia GeForce 1080 Ti chip. The Tensor Cores can do 110 teraflops of processing, once again 10 times the performance of a 1080 Ti. 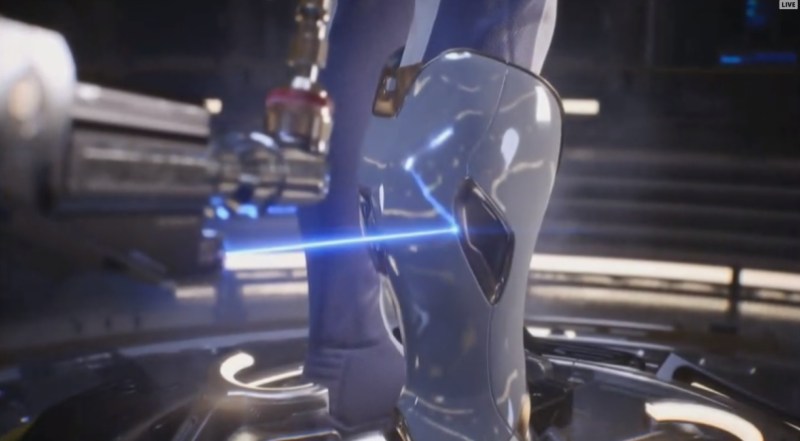 Put together in an RTX hybrid rendering pipeline, the subprocessors can do the work of six times of Nvidia’s high-end Volta AI processors, Huang said. He showed what the RTX can do with a real-time ray tracing demo dubbed Sol (pictured above). 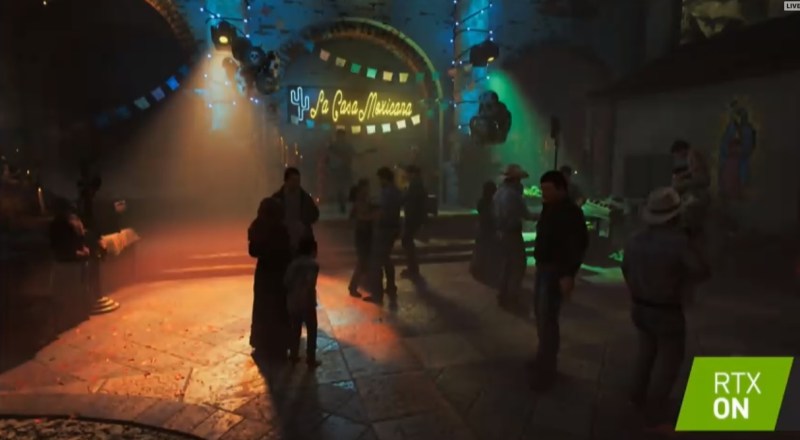 Above: Shadow of the Tomb Raider with Nvidia’s RTX processing.

Huang also showed what games would look like with RTX processing. He showed a demo of the upcoming Shadow of the Tomb Raider, which features tons of shadows as Lara Croft takes out enemies in dark jungles. This game debuts on September 14 on the consoles and the PC. 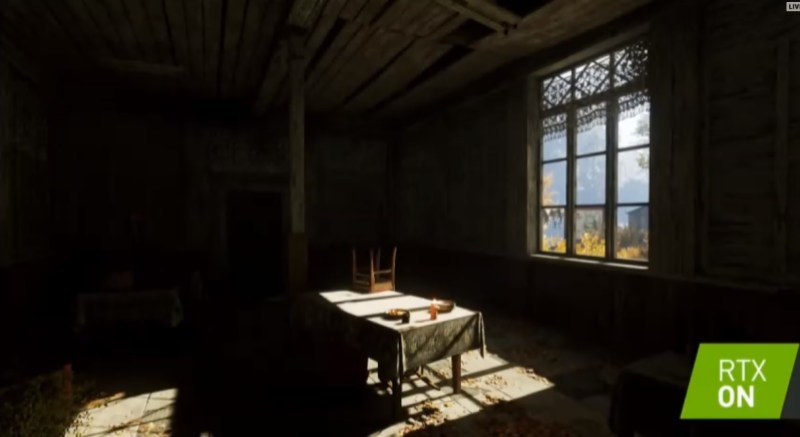 Huang also showed 4A Games’ Metro: Exodus, the third game of the Metro series (it has a February 2019 launch date). In the image, objects that are in the background are shrouded in darkness, while a table that is lit by sunshine is properly lit. 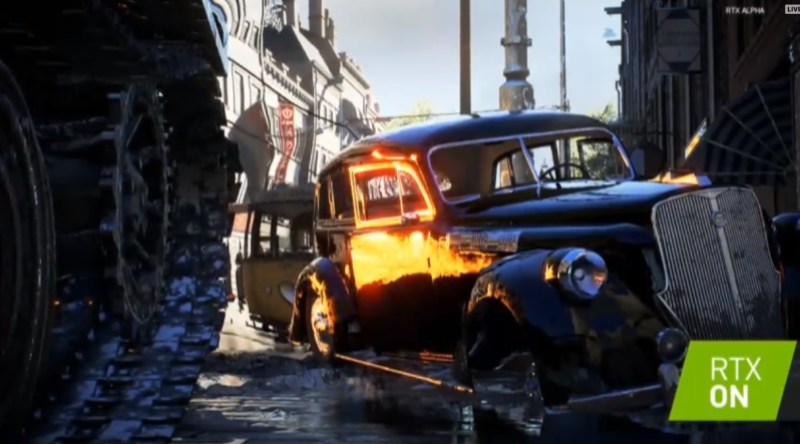 And Electronic Arts showed off what Battlefield V looks like with RTX turned on. You can, for instance, see the reflection of an explosion on the side of a shiny car. If you turn off RTX, the orange part of the reflection disappears entirely. The mirror effect is much more accurate and realistic.