Computer gaming is about to take a big leap forward. Nvidia is launching its next-generation graphics chips for laptops today that the company claims are at about 75 percent of the performance of the fastest desktop graphics processing units (GPU)s.

The mobile graphics chips use the new Maxwell architecture that also serves as the foundation for Nvidia’s new desktop GPUs. The Maxwell-based mobile GPUs will be sold under the Nvidia GeForce GTX 980M and 970M brand names. Maxwell chips can deliver twice the performance per watt of power consumed compared to the previous generation of chips. And if you’ve got a desktop gaming machine that is just a little bit old, chances are that the newest gaming laptops will beat it.

As with the desktop GPUs, the mobile GPUs are aimed at addressing the trade-off that players find in games such as Call of Duty: They must either emphasize speed of gameplay or quality of graphics. The Maxwell chips have features that enable them to deliver both performance and low-power consumption.

A successor to Kepler (the name for the previous generation of chips), Maxwell is a new architecture that Nvidia will use across a whole family of products. Its first chips were aimed at the high end, but the latest products are targeting one of the fastest-growing parts of the game hardware business: gamer laptops. That’s why there are now four times as many gamer laptop models as there were three years ago. While PC gaming hardware is growing 11 percent a year, gaming laptops are growing 70 percent a year, Nvidia said.

Kaustubh Sanghani, the general manager of the notebook GPU business, told GamesBeat that the gaming laptop business has grown five times in the past three years. And the No. 1 thing that customers in that market want is “desktop-class performance,” he said.

“We have nearly closed the gap,” Sanghani said.

Santa Clara, Calif.-based Nvidia is touting new features including dynamic super resolution, which renders a game in 4K in the background and outputs it to whatever quality can be displayed on your device, such as 1080p, or a high-definition TV. The resulting image is better than directly rendering an image to 1080p. 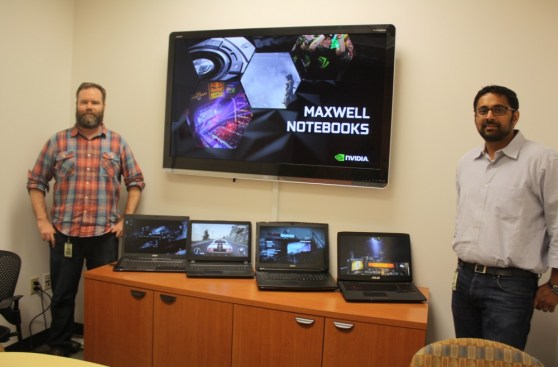 Above: Matt Widener and Kaustubh Sanghani show off Maxwell laptops.

Sanghani said that the chips also have multiframe antialiasing, which smooths out the “jaggies,” or the jagged lines on curved surfaces that make images seem obviously computer-generated. He said that the new antialiasing works as good as 4X antialiasing but doesn’t consume as much processing power.

The “voxel” technology — dubbed Voxel Global Illumination (VXGI) — in the chips also enables developers to create better lighting for complex scenes with lots of movement, lighting, and shadows. You can, for instance, place a hanging light in a game scene. If an object hits the light and makes it swing back and forth, it will cast accurate moving lights and shadows throughout the room. Nvidia says it will enable developers to create environments with natural lighting and breathtaking realism. (See the analysis of the tech by graphics expert Jon Peddie here).

Matt Widener, a member of the technical marketing team at Nvidia, said that he expects many new games will be using the VXGI technology within six months.

Yet even with these features, Maxwell chips have twice the energy efficiency of the previous generation. That allows Nvidia to crank up the performance without causing overheating.

Nvidia has added software to its GeForce Experience dashboard for the GPUs. That software helps gamers run games at optimal settings so that they consume less power. For instance, a 980m-based laptop will run League of Legends for 90 minutes on battery power. But with Nvidia’s BatteryBoost technology, it can run for 117 minutes at 30 frames per second. Tomb Raider runs for 49 minutes normally, but it runs for 76 minutes on BatteryBoost. If you want to optimize a laptop for battery life, all you have to do is click a single button in the GeForce Experience dashboard.

Numerous companies are launching Maxwell-based laptops today. Those include Asus, MSI, Clevo, and Gigabyte. Maingear said it will have three gamer laptops coming out with the Maxwell chips. Origin PC will also use Maxwell in four gamer laptops.

“The pipeline of games that is coming is amazing,” Sanghani said. 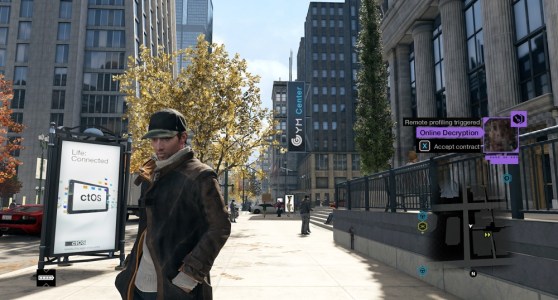