Nvidia announced its Tegra K1 mobile processor last week at the 2014 International CES. This monster of a mobile chip has 192 GPU (graphics processing unit) cores, compared to 72 in last year’s Tegra 4. It is so powerful that it can run Epic Games’ Unreal Engine 4, which is used to create graphically beautiful console and PC games. 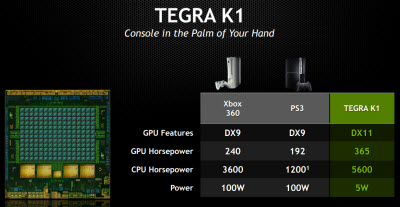 Above: Tegra K1 has faster graphics and CPU than a PS3 or Xbox 360.

In fact, it has more processing power than the PlayStation 3 and the Xbox 360. Not bad for a tablet chip. It shows that mobile computing is racing ahead at an accelerated pace, and it won’t be long before we see visuals that will be truly astounding on mobile devices. And it should be interesting to more than just gamers because the Tegra K1 will likely go into a bunch of non-gaming mobile and automobile applications that rely upon better visual quality.

Tony Tamasi, senior vice president of content and technology, was at the unveiling last week at the Cosmopolitan Hotel in Las Vegas, just before the start of the 2014 International CES. We interviewed him about the details behind Tegra K1 and what it will be capable of doing.

The Tegra K1 will be the brains of next-generation smartphones and tablets. But it will also be used to bring supercomputing capability to your automobile. Nvidia will have two versions: a 32-bit version with four ARM Cortex A15 central processing units and a 64-bit version with dual CPUs based on Nvidia’s Project Denver.

Here’s an edited transcript of our interview with Tamasi. 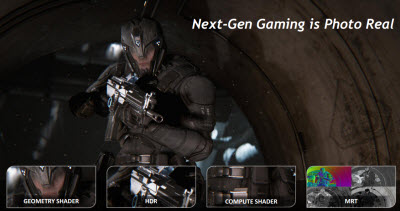 Above: Get ready for next-generation mobile game graphics.

GamesBeat: What did Jen-Hsun [Huang, CEO of Nvidia] mean when he was saying this was one of the biggest projects you’ve ever done?

Tamasi: Certainly the boldest. A lot of people didn’t expect us to be able to get GeForce or Kepler into mobile at all. They didn’t think we’d be able to get the power down, make it efficient enough. They thought it was too big. What he means by that is we’ve spent — Most of the company is invested in building GPUs. A large part of that investment, particularly with the Kepler architecture, was invested in making it super-efficient and very scalable. If you aggregate that investment, plus the Tegra investment, it’s an enormous undertaking.

When we started talking to customers about this a while ago, a lot of them thought we were crazy. “There’s no way you’ll get a GeForce class thing into a mobile power budget.” All those demos you saw there were in seven-inch tablet power budgets. Small tablet power budgets. We have data showing the power efficiency of Tegra K1 versus a bunch of other things. It’s about one and a half times as efficient as anything else on the market right now.

GamesBeat: It seems like you could use Tegra K1 as the foundation for new kinds of machines, as opposed to things that people already know.

Tamasi: Yeah. Shield is our first step in that direction. It’s a new kind of machine. There are already customers working on some pretty exciting stuff with both variants of Tegra K1 – things that you know, that you’re familiar with, and new classes of machines that are similar to what you’re familiar with, but different in some way. They look different. They’re attached to different things. The thing that’s cool, though, is that it’s all because this is just GeForce. No developer has to learn anything new. It just works.

GamesBeat: Does “K1” mean anything? Why not call it Tegra 5?

Tamasi: We didn’t call it Tegra 5 because that made it seem too incremental compared to Tegra 4. It’s a radical leap compared to Tegra 4, from a GPU perspective. Tegra 4 wasn’t even a unified architecture. It was ES2. It was built on what we called the Aurora GPU architecture. Tegra K1 is a full Kepler implementation for mobile. It’s not in any way watered down. That’s bringing it into a whole new class, so we felt we needed to signify it in some way. Of course, the “K” is for Kepler (the code name for Nvidia’s latest 3D graphics chip architecture). 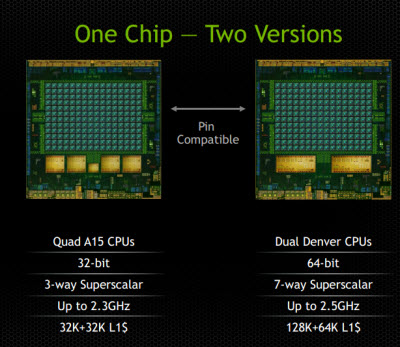 GamesBeat: Is there a name for the 32-bit part?

Tamasi: That’s the A15 CPU, ARM Cortex A15. The way to think about it is that ARM generally licenses CPUs. What Denver is, we license the architecture and do our own implementation. Qualcomm does that with Krait, for example. Apple did that with their CPU, A7.

GamesBeat: With something like the A15, then, you’re sort of putting together Lego pieces?

Tamasi: Essentially. We can modify it somewhat, but we’re not architecting the CPU from the ground up. With Denver, it’s our own design from scratch.

GamesBeat: What was the comparison for Tegra 4? I didn’t see a chart that lined up the performance against the rest of the range.

Tamasi: For graphics, depending on what you’re doing, it would be three to six times the performance compared to Tegra 4. Maybe more. Tegra 4 is Open GL ES2, not even ES3, so from a feature set perspective, it’s not Kepler. It’s not GeForce. It’s not that class of machine.

GamesBeat: As timing goes, it seems like the 32-bit one will ship first and then the 64-bit will ship later?

Tamasi: That’s fair to say. As far as when they’re actually going to ship, I don’t think we’re talking about that. But you’d expect the 32-bit one to ship first. 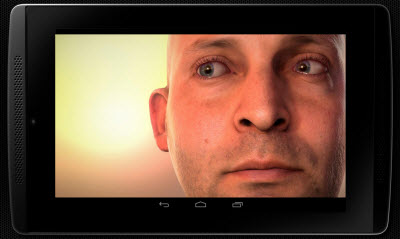 Above: The Tegra K1 can run the full Ira demo of a human face without flaws.

GamesBeat: But all the demos were done on real silicon?

Tamasi: Yeah, everything was run on real chips. Some of those were on reference platforms. Some of them were running on full-on tablet devices. It’s all real. There’s no smoke and mirrors.

GamesBeat: Does the power budget matter a lot in cars as well?

Tamasi: It matters to some degree. There’s a space constraint, and to some degree a heat constraint as well. If they want to have a bunch of electronics, the heat has to go somewhere, and they have reliability issues. You have a little bit more volume, but not as much volume as you’d think. They pack a lot of stuff in a car.

GamesBeat: Are you not at the point where you could talk about close partners for the car products? 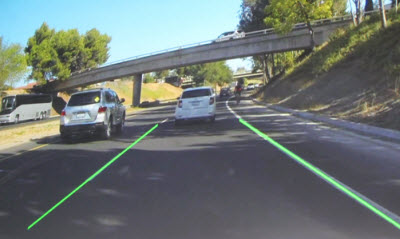 Above: Nvidia expects to use Tegra K1 in cars for atomated safety controls.

Tamasi: We’ve been working with BMW and Audi and a bunch of other guys. Whether we can announce who we’re working with specifically on Project Mercury, I don’t think we’re disclosing that yet.

GamesBeat: Is there a Shield 2 in the works that would use Tegra K1?

GamesBeat: But it seems ripe for Android tablets.

Tamasi: Oh, yeah. Or phones, for that matter. It’s the same basic power budget and efficiency, the same power envelope as Tegras. I’d say smartphone/superphone products through tablets through clamshells, micro-consoles, gaming handhelds, all that stuff.