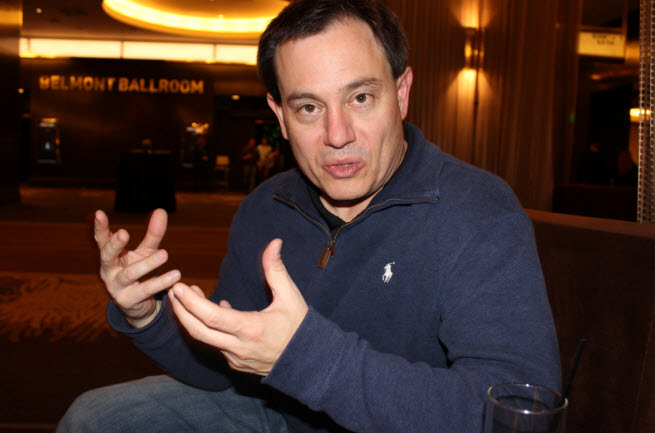 Above: Tony Tamasi of Nvidia talks with his hands.

GamesBeat: I’d heard both the game streaming and the G-Sync announcements before. Is there anything particularly new about those?

Tamasi: We showed 1080p [at] 60 [frames per second]. We showed streaming from 6,000 miles away with low latency. That was playable. It has some profound implications in a couple of ways. One, for cloud gaming itself, you can potentially build fewer data centers, which helps on the economic side. It’s not to say we’ve solved it, but we’ve made great progress on the latency piece.

On the G-Sync side, there’s a slide Jen-Hsun showed with seven partners and three different classes of display, all available and shipping in Q2. That’s all news. 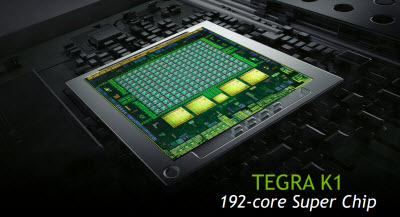 GamesBeat: With 192 processors on Tegra K1, what’s the comparison to Tegra 4?

Tamasi: Tegra 4 was — Fragment shader was four times three times four, so that’s 48, and vertex shader was 24, so 72. We had separate vertex and fragment shaders, where this is a unified machine. The clock here is higher too, quite a bit higher.

GamesBeat: Was it your secret target to be able to run games using Unreal Engine 4?

Tamasi: I don’t know about a secret target. [laughs] But making the choice to put Kepler in, we knew we’d have all of Kepler’s capabilities. That’s full DirectX 11 or, in this case, full OpenGL. We’ve had a close relationship with Epic for more than a decade. We worked with them to implement OpenGL 4.4 back in for Unreal Engine 4.

As soon as you do that, everything just works. In fact, a lot of these demos — We didn’t carefully craft those demos. Epic did them for console or PC. They didn’t even see these things running until maybe the week before Christmas, and neither they nor us had to touch them. It just worked. That’s one of the things Tim Sweeney was really impressed by.

It’s pretty powerful, because it allows the developers using those engines to just bring it over. There’s no technical barrier to having their content running here. You have next-gen features with more horsepower than the current game consoles. That’s a capable platform for gaming.

GamesBeat: What OSes can the Tegra K1 run?

Tamasi: Anything that runs on ARM. We’re primarily targeting Android, but it could run Windows RT or Linux. SteamOS is just a variant of Linux. 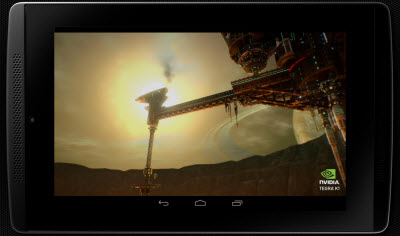 Above: Demo of UE4 game running on Tegra K1

GamesBeat: We’ve heard about the possibility of dual-boot machines, running something like Android and Windows. There was the rumor last week that Intel was going to be promoting this. I assume that something like Tegra K1 could do that?

Tamasi: Totally capable, yes. One of the exciting things about something like this — Let’s say you were do to SteamOS, or really anything. When you have the capability to run the full game engine, the game just has to recompile for the binary instruction set, like x86 versus ARM. In many cases that’s a compiler option. They don’t have to implement a new renderer or do anything. Just compile it and run.

We’ve done a lot of work to bring what I’ll call the middleware over to ARM. We’ve been doing this for a while. We did Unreal Engine 3, id Tech, Unity, all these engines and all this work to bring it over. We’re trying to get rid of any technical impediment to games running on any platform.

GamesBeat: Are you aligned with Valve on Steam boxes?

Valve’s vision for SteamOS is to create a PC-class ecosystem, but around SteamOS. In that ecosystem, it’s open. People are free to choose whatever they want. They can choose Intel integrated if they’re super cost-focused. They can choose AMD if they believe they’re aligned with AMD for whatever reason. But from a Linux graphics perspective, we’re clearly the leader. Customers recognize that. 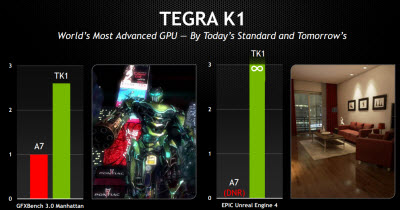 Above: Tegra K1 can run circles around the A7.

GamesBeat: Can you stream Steam content over to the TV?

Tamasi: That’s what we showed. It was Steam using Big Picture. That actually is the way you navigate it. Then it streams to Shield in console mode, which is just a Shield with an HDMI cable connected to your TV and an Ethernet cable in the back. You can sit there and fire up Steam, navigate in Big Picture, buy a game, download and install it, play it on your TV. You get all of the benefits of the PC — horsepower, digital distribution — but on your TV. You can do wireless or wired. You get higher bandwidth on wired, so you get higher resolution and higher frame rate, but it supports either.

It’ll be interesting to see how the whole Steam Machine, SteamOS thing turns out. Linux gaming largely isn’t a factor, but you never want to count Valve out.

GamesBeat: A subset of 65 million Steam users is not a bad market, but in the grand scheme of things, it’s not necessarily going to make many waves for the other guys. It has to come with bigger things, I think — getting the bigger hardware companies involved in the machines, leading with a game like Half-Life 3.

Tamasi: Yeah, make sure you ask Gabe about Half-Life 3. [laughs] 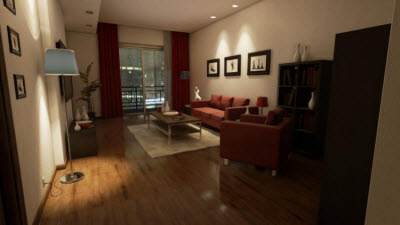 Above: Showing off Unreal Engine 4 on a Tegra K1.

GamesBeat: What do you plan as far as marketing for Shield or other products?

Tamasi: With Shield one, we built it because we saw a need to lead the way. We were dipping a toe into Nvidia selling to the end user, selling consumer electronics. We had to learn a lot, so we started with a small number of channels and a very limited geography. It’s gone quite well. Then you scale up to all markets, all geographies.

It fills the need that we thought it would. It’s the best Android gaming platform out there. Developers like it. It’s the best platform for development on Android because it’s a superset of everything. It has controller. It has touch. You can hook up a big screen. It’s the most capable SOC. They like it because they can cover everything, and at the end of the day it’s still just Android.

We’re at the beginning of a change. Android has obviously been super successful – here, and in a bunch of other countries. In other countries, consoles are less developed than they are here in North America. There, you’re going to see Android devices connected to TVs. With SOCs like Tegra K1, you have something better than an Xbox 360 or PS3 with next-gen capabilities that you can attach to the TV, with all the benefits of being in the Android ecosystem.

I have all the consoles at home, but it sucks that all my stuff is scattered everywhere. I have Steam here, Xbox Live there, PlayStation Network, over there, Google Play. I want to have all my stuff in one place. In a lot of markets, Google is as well-positioned to do that as anyone. If you look at the trajectory mobile is on, particularly the capabilities of mobile relative to the other platforms, it’s exciting. Google is working hard at that stuff. They’re not going to sit still.