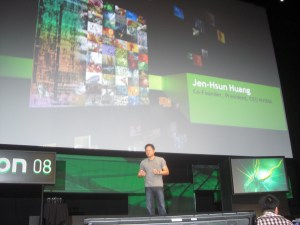 Nvidia chief executive Jen-Hsun Huang took the stage at the inaugural Nvision 08 conference to celebrate the era of visual computing. You’d expect him to be the chief ambassador for this era, since the graphics chips that his company designs are at the heart of the hardware that powers visual applications, from car designs to video games.

The talk showed the range of what is now possible and where computer visualization technology will go. Huang said that the new era is just at its start. He brought up numerous examples of how visual computing is changing the way we do things. He noted, for instance, that Google Earth has been downloaded 400 million times and can transport us to the “Bird’s Nest” Olympic Statdium in Beijing within seconds.

He also noted there are about 100 million people who are actively playing virtual world games, known as massively multiplayer online games, around the world. At some point, social networks and MMOGs will converge and become one, he said. To reinforce that point, Huang invited the founder of Nurien, a three-year-old Korean company which has created a 3-D animated world where players can create their own realist avatars, or virtual characters. On stage, the company showed off a virtual character modeled after Huang. The fake Huang proceeded to kiss a virtual girlfriend.

“How much did she have to pay me for that?” Huang said. “You guys are awfully generous with that character. He looks like he is six feet two.” (Huang himself is considerably shorter than that.)

Nurien allows gamers to create their own virtual rooms and embed live videos in the walls, much like in worlds such as Lively by Google. Except the difference is that the Nurien technology is as close to lifelike as is possible with today’s graphics technology. Huang said such technologies would be the backbone of “the next Facebook.” He noted that Strategy Analytics predicts that one in seven people will be in such worlds by 2015.

Huang also highlighted the work of Sportvision, which created the still-frame “augmented reality” images used to visualize the performance of athletes at the Beijing Olympics. It showed, for instance, how Nadia Liukin proceeded through the air during a gymnastics routine. With the technology, Sportvision can insert graphics pointers into images, such as showing the path of a football pass during play. It can also show the flow of air over race cars in the midst of a race. That takes a lot of computation and thus maximizes the use of Nvidia’s graphics chips.

Huang also noted how visual computing is changing how we enjoy still photography. That’s where you use computer graphics to enhance a photographic image to blend both real and artificial images together.

Naturally, Nvidia had a lot of commercials for its technology sprinkled in the speech. Huang invited a Lamborghini car designer on stage to talk about how the designers had to use a combination of ray-tracing and rasterization to get the best graphics effects for a simulated car. It so happens that Nvidia’s newest graphics chips are capable of such hybrid processing. This capability is one of the ways that Nvidia hopes to hold off Intel as the world’s biggest chip makers readies a rival chip, dubbed Larrabee, that also promises to combine rasterization and ray-tracing.