When politicians embrace games and the metaverse, you know we’re getting somewhere with mainstream recognition. And yesterday, New York mayoral candidate Andrew Yang dressed up as a metaverse avatar at one of his events.

Yang donned a 3D animated avatar from Zepeto on Thursday night to make an appearance in the metaverse, the universe of virtual worlds that are all interconnected, like in novels such as Snow Crash and Ready Player One. Zepeto is an early metaverse platform with over 200 million lifetime users, and 90% of its users are Gen Z people who are hard to reach with traditional media. Zepeto is the largest avatar company based in Asia, and the company said it is the fastest-growing avatar company in the world. Leaders in the entertainment and fashion industry have partnered with it to reach Gen Z users who socialize, entertain, and consume content.
​
Politicians and public figures have begun to embrace new technology like video games, virtual spaces, and streaming services to reach broader audiences. During the 2020 presidential campaign, the Biden/Harris campaign created a map on Fortnite. AOC became one of the most popular Twitch streamers when she streamed Among Us last October. And Yang used a tech-savvy campaign technique of appearing as a hologram in 2019 as the Democratic Presidential candidate. 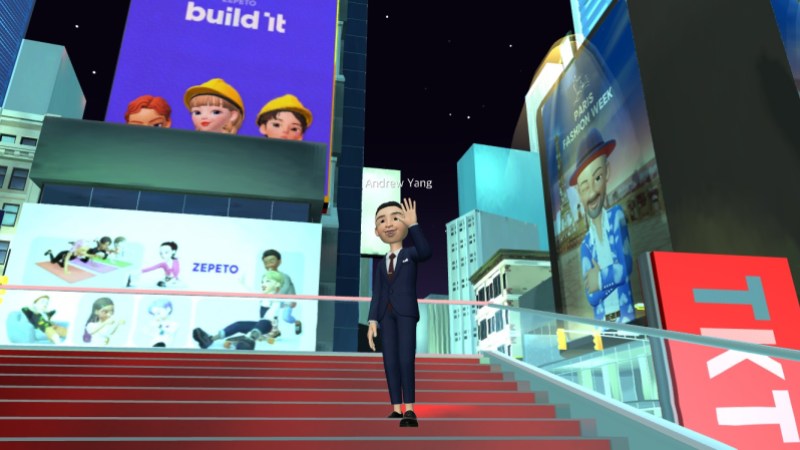 Above: Andrew Yang in the Zepeto metaverse.

Zepeto also has partnerships with Gucci, Christian Louboutin, Nike, and more. Yang’s conference, “A Night with Andrew Yang: Business, Art, and Tech” was a small event, but it marks an interesting point in the history of the metaverse.

Asked what he thought about the creator economy, virtual worlds, and the metaverse, Yang replied, “I’m a big fan of virtual economies. I think it can be a path forward for a lot of New Yorkers and young people. New York City should be the creative capital of the world. I really want to take a big swing at improving millions of people’s lives here in New York, by getting buying power into their hands. And it’s going to be people like Rudy and folks in the cryptocurrency community that I think are a big part of it.”