Following trends isn’t a concern for independent developer Lucas Pope, who found unlikely success with Papers Please, a game centred around the distinctly unglamorous topics of paperwork and immigration.

Pope is now working on a 19th Century ghost-ship mystery, Return of the Obra Dinn, and he released an early demo of the game this morning. Papers Please won the British Academy Games Award for best strategy and simulation title in March this year and has sold over 500,000 copies since launch, showing the potential for industry success for a single-handed developer with a unique idea. Pope’s current project will have more eyes on it from the start due to his previous success.

“I want to challenge myself so this’ll be a very different game from anything I’ve done before, including Papers Please,” said Pope on his development log. “There’ll be less creativity with the gameplay and instead I want to experiment with the rendering, story, and a few technical features. Right now I have only a rough idea about the narrative. I’m hoping to capture a compelling mystery with suspense and twists in the limited space of an old merchant sailing ship. It won’t be the typical ‘collect items and look for clues’ structure. There’s a slightly cool gameplay hook, but I won’t go into details on that until much later.” 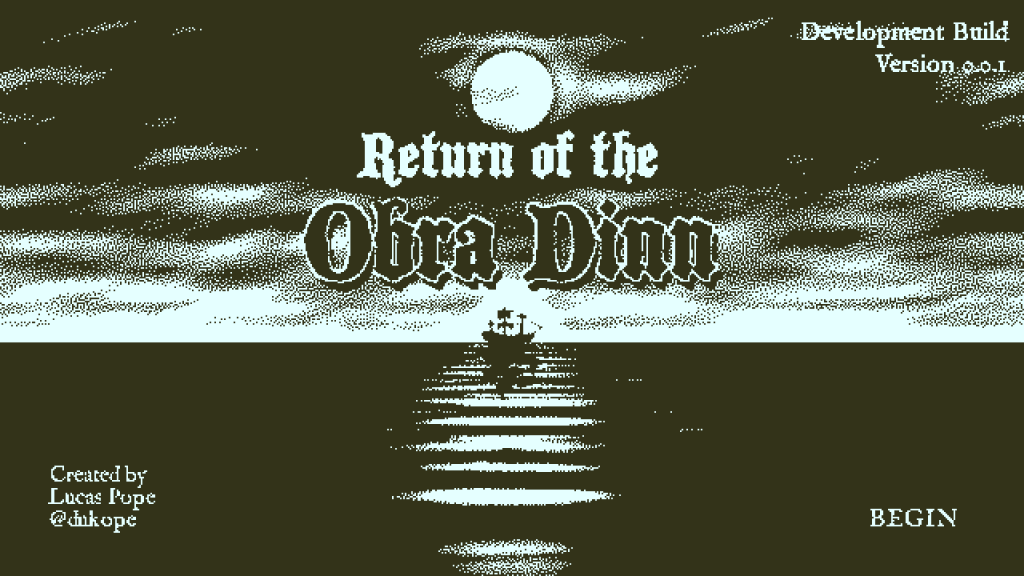 Above: The title screen for Return of the Obra Dinn.

Pope made the demo live this morning, explaining that it’s a very early, untested build and that there isn’t a great deal to do right now. Still, it’s an opportunity to see Pope’s artistic vision in action, including what he describes as a “1-bit” art-style.

“My first computer was a Mac Plus,” explained Pope. “I’ve always had a nostalgia-softened spot in my heart for 1-bit graphics. I’d like to capture the detailed black & white look of old Mac games in a real-time first-person game. I plan to push it grittier and less cartoon-like than those old games; the hard part will be keeping everything legible without it becoming an unreadable mess of dithered pixels. One interesting problem with 1-bit rendering is that it doesn’t scale well for images and it compresses to video like shit – so YouTube stuff may look really poor. We’ll see how it goes.”

If you do check out the game, Pope is happy to listen to feedback, either via Twitter or his dev log.