After selling the virtual reality startup Oculus VR to Facebook for $2 billion, Brendan Iribe has a lot of money. The chief executive of Oculus VR, the maker of the Oculus Rift virtual reality headset, is using that money to make a $31 million gift to the University of Maryland.

The gift is the largest in history for the university in College Park, Md. Iribe, a UMD alumnus, is giving the money to fund construction of the Brendan Iribe Center for Computer Science and Innovation, and the remaining $1 million will establish the Brendan Iribe Endowed Scholarship in Computer Science. The center will encourage the study of virtual reality, which is a 3D computing experience that immerses the participant in a believable virtual world.

In addition, Oculus chief software architect and co-founder Michael Antonov, a graduate of UMD from 2003, is donating $4 million to the university. Most of this gift — $3.5 million — will support construction of the building. The rest will fund scholarships. Elizabeth Trexler, Iribe’s mother, is also donating $3 million to establish two endowed chairs in the Department of Computer Science.

Iribe said in an interview with GamesBeat that he spoke at a “hackathon” event at the university and visited its aging computer science building, which was built in 1987. It was in such bad shape that he turned to Antonov and said they should fund the new building.

“The building was not inspiring, and I didn’t remember it being this depressing,” he said. “It felt like the right thing to do.”

Iribe and Antonov were wealthy from the Facebook acquisition.

“I thought why not use a big percentage of what I had received to do this,” Iribe said. “It’s good for the future of the school and virtual reality. I have a broader commitment to the technology, but I was never in the right position to support academic programs and make a real impact on education.” 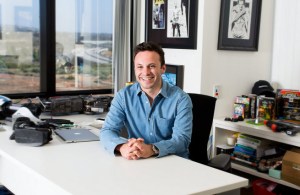 It occurred to Iribe that he could invest the money he made from the acquisition and wait to donate until the end of his career. Iribe said he was inspired by Mark Zuckerberg, CEO of Facebook, and a multibillionaire who has pledged to give away most of his wealth.

“What fun is it to make a donation at the end of your career,” Iribe said. “This way we get to make a bigger impact and participate in the success of this building. The name on the building isn’t going to be a deceased person, but someone who is still out there trying to pioneer this space. I have worked closely with Mark, and I have incredible respect for him and his donations to charity.”

He noted that Palmer Luckey, cofounder of Oculus VR, was just 19 when he was creating the first version of the Oculus Rift. That’s the same age as man of the students who will use the building.

“These college students aren’t jaded, and they are coming up with ideas that are changing the world,” Iribe said.

The new facility will be a hub for cutting-edge computer science research and an incubator for tech and innovation. It will add new areas of study, including virtual and augmented reality, cybersecurity, robotics, and “big data.”

“I’ve been passionate about computer science my whole life, and my experience at the University of Maryland fed that passion even more,” said Antonov, in a statement. “My hope is that this gift will give UMD students access to world-class resources and facilities for computer science that enables them to achieve the seemingly impossible.”
“The transformative vision and support of Brendan, together with the exceptional commitment of his mother, Liz, and his UMD classmate Michael, will create a unique space where students from all disciplines can imagine, build, collaborate, and succeed together,” said University of Maryland President Wallace Loh, in a statement. “This is truly a space that will mold future innovators and entrepreneurs and spark economic vitality in Maryland and beyond.”
The building’s design encourages collaboration, with an emphasis on hacker/maker spaces and team breakout areas.
“The Iribe Center will feature state-of-the-art maker spaces with access to new equipment and resources that enable students and faculty to bring their ideas to life in ways that were previously inaccessible,” said Jayanth Banavar, dean of the College of Computer, Mathematical, and Natural Sciences, in a statement. “It’s exciting to be working on the cutting-edge of the field, alongside Brendan, Michael, and the team at Oculus, and I’m looking forward to seeing what our community creates.”

The school’s computer science department ranks No. 17 in the Academic Ranking of World Universities and No. 15 in the U.S. News & World Report rankings of graduate programs. About 2,000 students are studying undergraduate computer science, and 200 are graduate students.