Just ahead of Facebook’s F8 conference for developers today, photos and new details emerged suggesting that the company’s low-cost standalone VR headset Oculus Go is close to an official launch. A post on Reddit shows boxed headsets in a Best Buy glass display case, and Amazon has posted a pre-release page for the headset, as well.

Discovered by RoadtoVR, Reddit user theDarthonly shared a photo of 16 Oculus Go units on display at a Fayetteville, Arkansas Best Buy, some marked 32GB and others 64GB, matching previously known storage capacity options for the headset. With F8 starting shortly, the announcement of immediate in-store availability is likely to take place soon. 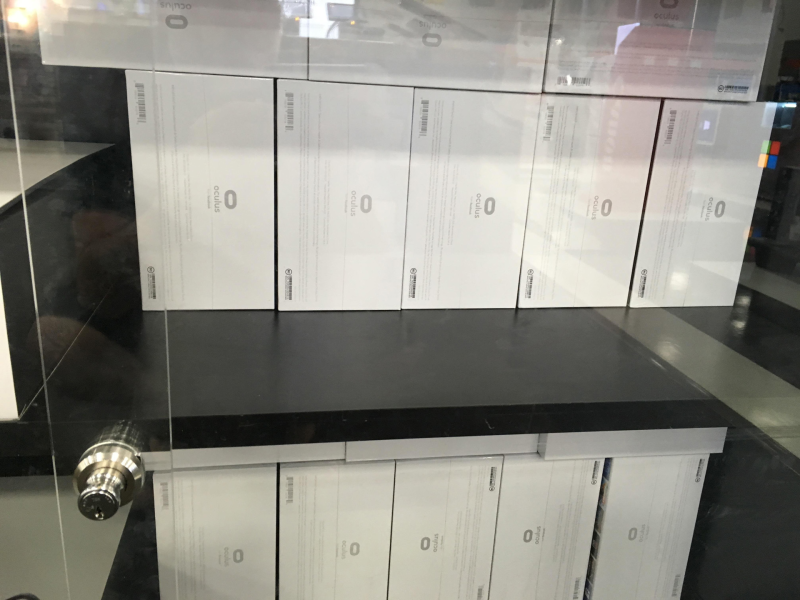 A separate report from UploadVR this morning notes that F8 developer attendees are likely to receive Oculus Go headsets for free. Earlier today, an image briefly appeared on a Facebook VR group page showing a sign “informing attendees that they can pick up their own Oculus Go unit at the registration desk later today.” Assuming this is accurate, the announcement would likely be made during Facebook’s keynote, which kicks off at 10 a.m. Pacific. Facebook previously gave away Gear VR headsets to Oculus Connect attendees, so there’s some precedent for seeding inexpensive VR hardware to developers.

First unveiled last October, Oculus Go promises a 2560×1440 display paired with a Snapdragon-class mobile processor, basic head tracking, speakers, and single controller — all starting at around $199 for 32GB of storage. Rather than requiring a smartphone or computer, the headset has everything needed to function on its own, running Gear VR apps. While the headset is expected to be quite limited in performance, Oculus will continue to offer steps up, including a higher-end standalone model codenamed Santa Rosa and its more powerful tethered computer headset, Oculus Rift.

Updated at 10:34 a.m. Pacific: As expected, Facebook announced that Oculus Go is officially available today starting at $199 for 32GB. The 64GB version is $249. Our full review of Oculus Go is here.