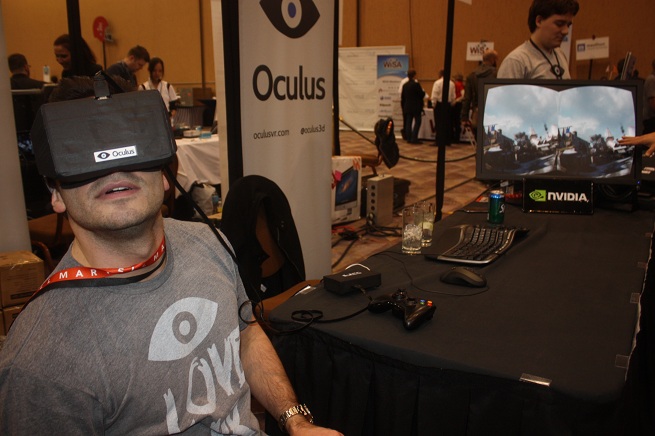 Motion sickness is the curse of virtual reality. When you wear a virtual-reality headset and the screen’s doesn’t match your body’s movement, it can make you feel sick — to the point of throwing up. But Oculus VR, a virtual-reality headset maker founded by Palmer Luckey, is launching a new headset sometime soon that it promises will make VR into an immersive and entertaining experience. 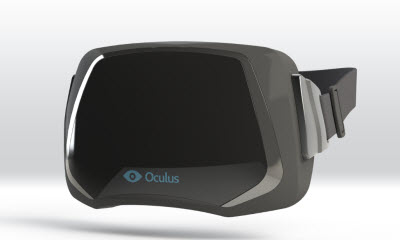 We tried out the latest Oculus Rift VR headset at the Consumer Electronics Show in Las Vegas. Our time with the device impressed us, and we didn’t leave any green goo on the ballroom floor of the Digital Experience party at the MGM Grand Hotel. Brendan Iribe (pictured), chief executive of Oculus VR, showed me a demo of the headset, which received funding via a $2.4 million Kickstarter crowdfunding project. The headset we used is a prototype and, after a few months delay, the final headset should ship in March.

“This is day zero of VR gaming,” Iribe said. “For the first time, it’s good enough so that you won’t want to kill yourself when you’re wearing it.”

This one already works great. The bulky goggles felt light on my head, and the images covering my eyes immersed me inside a gaming world. When I moved my head, the images changed rapidly enough to match what I would see if I turned my head in normal life. I walked around inside the Citadel demo, which depicts a medieval village built with Epic Games’ Unreal Engine. I experienced no lag between my movements and the changing imagery, so I didn’t get motion sickness. It was full stereo 3D, covering both of my eyes.

I could turn my head any direction I wanted, with a field of view of 110 degrees diagonal and 90 degrees horizontal. The resolution is 1280 x 800 (or 640 x 800 per eye), which is good but not spectacular. The Unreal Engine 3 graphics were good but flawed. The snowflakes had real shape to them, but they looked kind of fake as I could see through them. So it will take considerably better 3D graphics to convince you that what you’re seeing is real life.

But the interaction was great. I could shoot a little green spark at objects in the scenery, and it was instantaneous and accurate. If I turned my head too fast, I could see a blur in the environment. Future improvements will fix the effect, Iribe said. The screen itself added 15 milliseconds of delay. The motion sensor has a 2 millisecond latency, or delay between interactions.

“In a future version, for consumers, we could do a higher resolution,” Iribe said. “This is just head tracking, but in the future, people should be able to integrate hand tracking. The final version will come when there is enough content and the developers of the world say this is consumer ready. We’re not there yet.”

Still, it is a very good achievement to make something that won’t annoy the gamer. Oculus VR has a very small margin of error in delivering a good experience. Some famous game developers such as id Software’s John Carmack and Valve’s Mike Abrash have expressed interest in virtual reality as a way to advance gaming. They’re encouraged by Oculus VR’s progress. Carmack even promoted the Oculus Rift at last year’s E3 trade show.

“Latency is fundamental,” Abrash wrote. “If you don’t have low enough latency, it’s impossible to deliver good experiences, by which I mean virtual objects that your eyes and brain accept as real.”

Iribe said the CES demo has a new motion sensor that reduced latency and improved the experience. I controlled everything with an Xbox 360 controller. But you can use a keyboard and mouse, and future user interfaces could work as well, like a faux sword or wand.

“Controllers of the future won’t be simple gamepads,” he said.

If it gets support from developers, Oculus Rift might present a really compelling shift to gameplay. For instance, you might hold a controller in your hand, but if you look down inside the game, you’ll see that you’re holding a sword. That adds to the illusion. You can control your movement with the controller, which is so intuitive for players that they can do it without looking at their hands. This is one small step on the way to the virtual reality of the Star Trek Holodeck, where you can’t tell what’s real and what’s not.

Pricing hasn’t been set yet. Oculus VR is currently manufacturing developer kits that will ship in March. Those developers will then modify their PC games so they are “Oculus ready.” The company will announce availability for consumers at a later date. Two games that will be Oculus ready are Doom 3: BFG Edition and Meteor Entertainment’s Hawken. The Oculus Rift works with Unreal Engine 3 and Unity. It supports DVI, HDMI, and USB inputs.

Luckey founded the company a few years ago. In August, the company launched a Kickstarter crowdfunding campaign. It raised millions and received support from 10,000 game developers and fans.