Oculus VR has a fun game on its hands with Dead & Buried, a wild west game where you engage in a saloon gunfight in virtual reality. 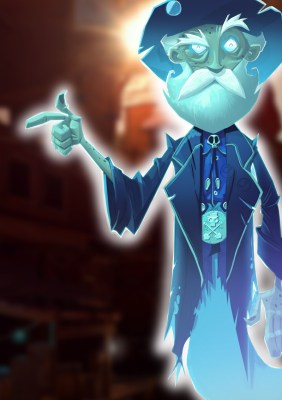 Above: The friendly ghost in Dead & Buried.

I tried a demo of the Oculus Studios exclusive at an event at the Game Developers Conference this week in San Francisco. It was one of the best shooting experiences I’ve seen so far in VR, which is expected to be a $30 billion market by 2020, according to tech advisor Digi-Capital. Based on this game, I think that shooters will be some of the best experiences in VR.

The title is one of the launch games coming for the Oculus Rift, which releases for $600 on the PC on March 28. It was created by Andrew and Ryan for Oculus as an exclusive. 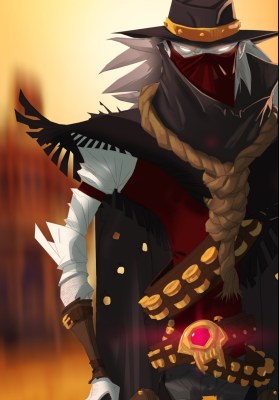 Above: Gunslinger in Dead & Buried.

Dead & Buried starts out as you die and descend into the underworld. A friendly old cowboy ghost greets you and says he can send you back up to the land of the living. But he wants you to send some more dead bodies down to him to fill his empty coffins.

Then you go into a saloon with three other players in a two-against-two shootout in a saloon. Jason Rubin, head of Oculus Studios, played with me in my round. He told me to use cover, how to load my guns, and to shoot the other guys as much as possible.

You start out with Oculus Touch controllers in your hand. These controllers represent the guns in your holsters. You have to reach down and draw them to pull them out. There are laser pointers that extend across the saloon so you can pinpoint your target on the other side of the saloon. You fire with the trigger. Then you gesture with the Touch to your belt to load the guns when you run out of bullets.

During the battle, you can pick up better weapons, like a grenade (or dynamite) launcher. It will lob a grenade at your enemy, and it works especially well for those enemies who are taking cover. I tried to load the grenade launcher by gesturing toward my hips. But Rubin pointed out to me mid-battle that I should flip it down, like a shotgun being loaded, and then flip it back up in order to load it.

Once I did that, I became fairly deadly with the grenade launcher. But I also used the revolver in my right hand as well. I found that it was hard to hit enemies in cover, so I had to slow down and aim. If you hit an enemy, they disappear and respawn somewhere else, often in the open. So I often shot some enemies multiple times. You crouch a lot in the game, but you don’t move all that much. You lean with your head to peek around a corner to shoot.

The action was nonstop. Whoever reaches 25 kills wins the match. Rubin won our battle with 25 kills. I came in second with a respectable 22. And our enemies went down with half as many kills. It was just one round of combat, but I found it to be really fun. You really get the feeling like you’re shooting in a Western, with all of the gunfire racket. You can shoot away at someone’s cover. I found that hiding behind the bar was very effective. But I got shot plenty.

When I was done, I was all sweaty. It reminded me of Raw Data on the HTC Vive, but I liked the idea of cover-based gunfights.