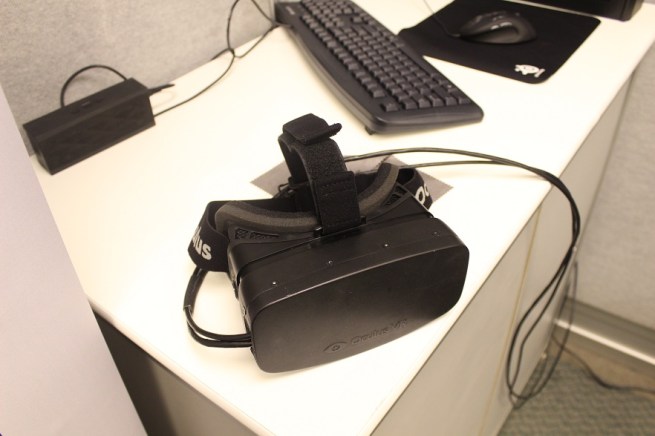 LOS ANGELES — Building a virtual-reality experience from scratch is difficult. Oculus VR, the company responsible for the Oculus Rift VR headset, already surprised everyone by getting out 10,000 development units out to its community less than a year after introducing the concept (and just several months after its astoundingly successful Kickstarter). This is an amazing feat, but that doesn’t mean the company didn’t struggle to put together just four of its new high-definition prototypes.

“It came in very hot,” Oculus chief executive Brendan Iribe told GamesBeat. “Right now, there are only four of these prototypes in the world. We’ll be building a few more that we will give to our earlier partners — which includes developers like Valve.”

Before the Electronic Entertainment Expo trade show, Oculus was very hesitant about committing to showing the latest iteration of its VR visor. That’s because it just didn’t know if it would get the new version, which runs at 1080p, finished in time for the event.

“It was certainly a crunch,” said Iribe. “Getting access to this latest 1080p display took some time. We had to really find the right partner for that. We also had to make our own circuit-board display controller to drive the screen, which is designed for cellphones.”

All that took a lot of time, but Oculus finished the units practically on the eve of E3. GamesBeat went hands on (eyes in?) with the new unit yesterday, and it’s certainly an improvement over the current development kit.

Iribe says his team wants a minimum of a 1080p screen in the consumer unit, so now that they got it working, it’s time to build the next prototype.

“High-definition was one of the biggest concerns, but we nailed it,” he said. “Now it’s on to the next set of problems, and it’s sort of like an onion. We keep peeling it back [and finding new obstacles to overcome].”

That includes reducing the latency of the head-tracking even further. The latest unit has a lag of about 35 milliseconds. Iribe says that while the hypothetical goal is 0 milliseconds of latency, they’ll settle on something around 15 milliseconds. After that, maybe Oculus will figure out the best way to add audio to the units. Or maybe they’ll improve how the optics works or bump up the resolution even further.