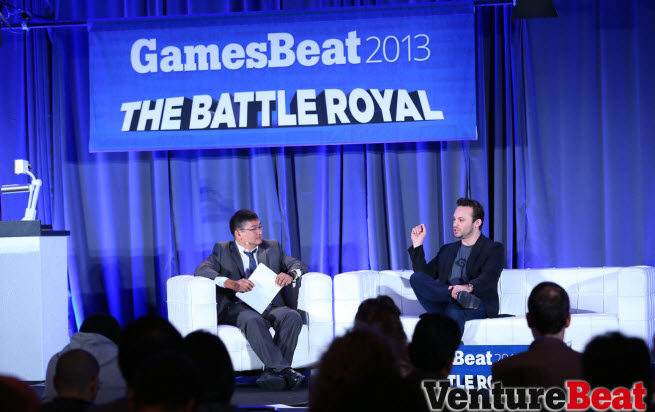 Above: Brendan Iribe speaking at GamesBeat 2013 in October.

GamesBeat: On the mobile side of things, are you setting an expectation of that as well? When might something that works with a smartphone or tablet come along?

Iribe: We continue to say that hardware is finally ready. But I’d say it’s just at the edge of being ready. We’ll see a lot of great advances in virtual reality over the next five to 10 years because of better hardware, on the mobile side and on the PC side, the graphics side.

I’m bullish that VR is going to reignite the PC race and the GPU/CPU race, which has largely plateaued. People aren’t talking about gigahertz or cores anymore. They aren’t talking about one GPU compared to the next, how many triangles they can do. It’s calmed down. With VR, though, when you put on the headset and it all comes together and works well, you want more. You want higher-resolution environments, even if you’re already running on a high-end computer. We expect to see a huge jump over the next decade in computing performance.

What does that mean for mobile, when suddenly we’re at the edge of making this all work in a PC that’s five or 10 times faster than a smartphone or tablet? There’s a big challenge there. That’s the kind of thing that a guy like John Carmack loves to sink his teeth into and pull something off there, something where people look at it and say, “How is that possible?”

Tim Sweeney was quoted recently at the Doom anniversary, talking about when he saw Doom in 2.5D. He didn’t know how that was possible at the time on such a low-end computer. That was a bit of what Carmack was known for. He and his group are very focused on the mobile side. We are throughout the company, but he’s spearheading a lot of that mobile work. We can’t give any details on it, but so far, from the glimpses we’ve seen, we’re going to see another “How did he make that work?” 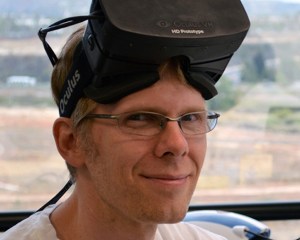 GamesBeat: How are you organizing yourselves? If Carmack has come in as CTO, is he overseeing almost every technology that’s being developed, or is he focused on mobile? Does Palmer do something different than what he used to?

Iribe: At this point there’s more than 50 of us in the company, and the majority of us are engineers. We have a team of real senior, rock star engineers. Of course, Carmack is at the top. He’s been spearheading a lot of the mobile effort, working with a group of talented engineers on that. He largely works out of the Dallas office. Most of the engineers, though, are in Irvine here, working remotely with John. There’s a handful of other developers in Dallas that John is working with.

It’s spread out. We can do a lot of this stuff remotely. So far, so good. John is known for being head-down. We’re trying to respect his wishes, where he wants to get in and code and solve these problems on such a small platform. To do that well, he needs to focus and have his isolation. That’s what he’s doing.

GamesBeat: Some different technologies are rising up as people talk more about wearables and virtual reality. Those areas are changing rapidly. Are you focused on any one of these technologies?

Iribe: We’re looking at a lot of different tech. Internally, we’re focused on building our own technology, leveraging all the momentum that’s out there around wearable computing and mobile computing and PC computing. But at the end of the day, all the code we’ve written and all the invention we’ve created has been focused on our own tech and our own products.

We love the ecosystem. A great number of other companies are doing cool stuff. We keep a watchful eye and see what others are doing. It’s very exciting. But we’re heads down on our own product and tech and software.

GamesBeat: Do you still see yourselves as having to do a lot of work on the ecosystem, finding the right partners in the PC makers or the peripheral makers that will go along with this? And on top of that, the game makers as well.

Iribe: When you get V1, we’d love it to be something that doesn’t require you to go out and purchase other products. You should be able to buy this thing and take it home and plug it in and it just works with whatever you have at home. We’re looking at investing in content in the ecosystem and offering as close to an all-in-one package and platform as we can. A complete set of services built around it, so you’ll be able to leverage and get to content easily. When you plug it in, you’ll have a lot of stuff to do.

There’s so much excitement around VR and Oculus in the game development community that it’s pretty easy to go out there and find developers who want to make Oculus content. The harder challenge is funding them. With this latest round of funding, we’re certainly going to be using part of it to seed the community and get more great content at launch, and in the months that follow. You need a road map of content. We’ll be making some announcements, even over the next few weeks and months, that show how committed we are to the ecosystem and content and putting our effort behind it.

Above: Oculus Rift prototype in early 2013

GamesBeat: So far you’ve had a lot of indie support. You probably also need a lot of support from established game makers and publishers.

Iribe: We love indies. You can look at something like the iPhone and it’s hard to argue that indies didn’t build the entire ecosystem there. It took a long time for the bigger publishers to show up on mobile. Most of the original success in the smartphone and tablet world, especially on the app side, came from indie third parties.

We’re looking at a mix of indies and triple-A. Triple-A builds high-fidelity content. You can look at mobile and say, “Well, that’s a lot of 2D games. 2D games are easier for smaller teams to build.” To some degree that’s true, but there’s a lot that indies can do. At the same time, we see a huge opportunity to get a few key, higher-production-value, higher-budget titles that deliver this high-fidelity experience.

We’re out there talking to triple-A developers now. It’s nice to have this series B round behind us, because we can go out there and not just have to try and inspire them to make content. We can actually invest in content.