Iribe: This is the third iteration of a prototype. Probably we’d consider it the fourth publicly displayed prototype. The first was the duct tape model. The second was the developer kit we shipped. The third was the HD prototype. Now we have this one, with positional tracking and low persistence. 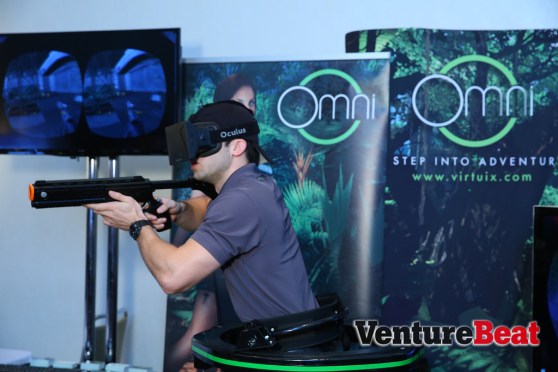 GamesBeat: Does this one take over as the latest dev kit?

Iribe: What we said before is that we want to do another developer kit just before the consumer release. Something that comes out that’s timed very closely and is very similar – almost identical – to that consumer hardware, so developers can start working with it and prep the content. We don’t want to ship a consumer product that’s very different from the previous developer kit, and then everyone has to scramble to upgrade.

It’s just like consoles. I remember the first Xbox kit was a Macintosh PC tower. It was obviously not the Xbox. [Laughs] Then, just before the console comes out, you get the actual kit that’s much closer to the box that ships. Everyone will be able to get their software compatible, so there will be a ton of software and apps and experiences for the consumer launch. 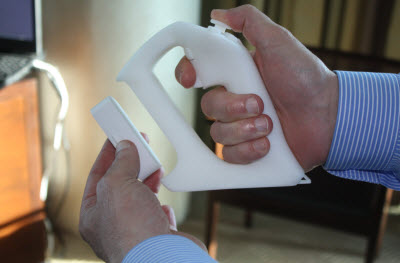 Iribe: These things take a lot of time. There’s a lot of work involved. I don’t think we’re going to see super-low-latency, perfectly accurate hand tracking or finger tracking for a while. We’re certainly working on a lot of things internally. When we get closer to a point where we can say, “Yes, the next version will have this feature,” we’ll talk about it.

A lot of times, the internal R&D doesn’t pan out. You go down one route, you find that it doesn’t work the way you planned, and you have to switch and go down another one. We don’t want to talk about internal R&D until we’re confident we can ship it.

We would like to tackle input. We’ve often said that right now, VR vision is the first step. Really, it’s only half of the VR experience. You need to get VR input, but what is that? Is it a keyboard and a mouse, a game pad? It may be in the beginning, but in the longer term, there are going to be more natural input devices for VR.

The keyboard and mouse and game pad allow you to have these superhuman inputs, but they aren’t natural. It’s obvious, when you put on the Oculus VR headset — people put their hands up and they say, “When am I gonna see my hands?” It’s something we’re excited to have, and we’re working on it for the future. It’s a longer-term problem.

GamesBeat: Is this something Carmack has worked on, or was it too soon for him to be involved with?

Iribe: As soon as he joined, the day he signed up, he started writing code. He was probably thinking about things for quite a while. He’s working on something that we’re not disclosing yet. You can monitor his tweets and get some ideas. We’ve said that he’s spending a lot of time on the mobile side. We’re not ready to talk about what that means yet.

He’s the kind of guy that can make impossible things possible. We looked at today’s computer, wanting more power for VR, and he said, “Well, what about today’s mobile device?” Many of us didn’t think it was capable enough, and he said, “No, let me take a crack at it.” We’re not ready to talk about what he’s doing yet, but he’s up to some incredible stuff.

GamesBeat: I think you said that Marc Andreessen came in recently and was impressed with a demo. Was this that demo?

Iribe: This is part of it. Again, there are some things in the lab that we’re not showing yet. If you saw the demo he experienced, it was definitely not publicly viewable. It was an internal prototype. But what he saw, it had low persistence and positional tracking. It showed the level of comfort and the quality of the experience we’re going to be able to deliver. He tried the demo, came out, and was pretty quick to partner with us. Talking to Carmack helped him as well. He was able to do all that on the same day, which I’m sure was a pretty exciting day.