Lorne Lanning is the scrappiest of old-guard game developers. His Oddworld Inhabitants survived a long drought by turning its library of console games into downloadable versions on various platforms, and now he is self-publishing a new version of another vintage game: Oddworld: Abe’s Oddysee New ‘n’ Tasty.

The new version will bring cool 3D graphics to the story of the pathetic creature Abe, who first appeared in 1997 on the PlayStation and the PC. Those platforms were limited when it came to 3D, but Lanning has hired outside developers to craft a beautiful re-creation of the title in a new high-definition form. He hopes to bring a classic platform adventure game to a new generation with a downloadable release for multiple platforms including the PC, Mac, Linux, PlayStation Network, and Wii U.

Lanning is still a big advocate of indie developers, and he hopes the latest game will pave the road for more original titles to come. Oddworld: Abe’s Oddysee New ‘n’ Tasty is his biggest bet yet that gamers will enjoy a fresh retelling of the Oddworld universe. The game is being developed by Just Add Water and published by Oddworld Inhabitants. It is expected to debut in 2014.

We interviewed Lanning at the Game Developers Conference in San Francisco. Here’s an edited transcript of our talk.

Lorne Lanning: It’s been a fascinating year. We chose to redo Abe’s Oddysee on 3D technology, but it was interesting how we got there. We’re able to have a conversation with the audience now. It’s more social wisdom than conventional as far as learning who’s your audience and what they want. We were able to capture more of that as we started putting more of the old games on Steam. 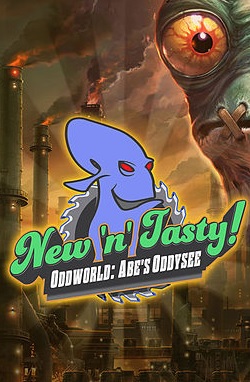 We said, “Okay, we don’t want to deal with publishers anymore. Distribution might be another story, but we’ll self-finance everything from here on out.” We’ve been financing Stranger HD and Stranger Vita. These are a couple of hundred thousand dollars. They’re not big bets. But it allowed us to build the coffers to where we’re able to build a business the old way. We make some profit and reinvest, instead of going out and borrowing.

That enabled us to get to here. Now, on this title, I wasn’t sure what we should build. I felt like we didn’t have the money to build a new intellectual property. The majority of the cost is in proving new mechanics, getting something creative that’s different. The bulk of the work afterward isn’t as bad as that R&D period. So on this, we were able to look at the audience and say, “You’re telling us you want new content. We hear you. But we don’t have the money. What if we could build one of these five options?” We gave them five options and started polling the audience.

What they came back to — I was quite surprised. They wanted to see Abe’s Oddysee, that 2D play pattern of platforming, brought back and completely redone. I never would have thought that was what the audience of today would want, in 2014. We said, “Okay, we can do that.” We’d archived all of our assets originally. We had a few million dollars worth of 3D database that was built at virtually film resolution for the original game. It wasn’t rendered at that res, but it was built much higher, because we were always thinking assets. What does Lucas do? What does Disney? So we were able to bring that back in, and for a couple million more of our own cash, we were able to bring New ‘n’ Tasty out.

GamesBeat: What did you say your ship target was?

Lanning: We haven’t given a firm date. We’re saying it’s coming soon. We’re not giving a month right away. Our basic tagline on that is, you’ll forgive us for not having a specific date, but you’re not going to forgive us for having a shitty game.

GamesBeat: What platforms are you aiming for?

Lanning: Right now it’s PS4 in the lead, plus PS3, PS Vita, Steam of course, Wii U, and we’re still discussing with Xbox. We’d like to be on Xbox. They’re trying to encourage us to be on Xbox.

GamesBeat: You’ve been hassling them too much.

Lanning: [laughs] I’ve backed off. I really want to see Chris Charla succeed. They’ve done a good job of navigating out of E3 in ways they desperately needed to, or else they’d be in real trouble. But the parity issue is still there. What we want to know is simple. If we invest in our platform, are we releasing, or will we be denied?

Being someone who got denied on their last fucking digital platform entirely, with content that was ripe for it, after being told I could be on there — We want to know for sure. We invest, and we’re a day late or a week late or two weeks late, are you going to prohibit us? Because we can’t absorb that loss. We want to know that what we’re investing in, we’ll get to release it. So we’re still in some discussions there. I think it’ll work out.

In the meantime, I’m being nice. I want Charla to succeed. I think he’s a good guy for the role.

[youtube=http://www.youtube.com/watch?v=DoLkc7laZgY&w=560&h=315]GamesBeat: They have something like 250 indie game developers now.

Lanning: Yeah. He’s making traction. The parity clause is a problem for indies. It’s something you might want to play with triple-A guys, but if you say, “If you’re not simultaneous on our system, you can’t release,” well, okay? You’re more concerned about your competition with Sony than you are about delivering great games at good prices to your customers. Not a great model. Pretty vulnerable. Hopefully it doesn’t continue that way and we’re able to get past it. I think we will. I just want to be certain.

With Oddworld on Unity, we’re taking some baby steps. If we can build on a technology platform that we have some faith in through the generation, can we get a better pipeline down where we’re producing newer variations faster? 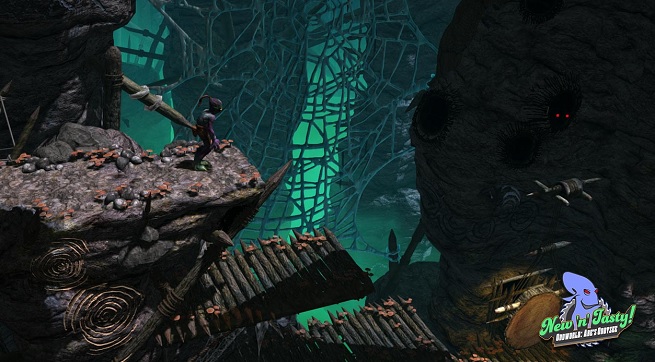 GamesBeat: What kind of resolution was the original game?

Lanning: The PSX game was basically half NTSC resolution scaled up to look like full NTSC. The videos were running at slightly under half NTSC, at 15 frames per second. The game ran at 30, but all the assets were scaled down and brought up. On PC it was full NTSC res. The PSX was largely the target platform, though.

What you have there is all in-game. It’s all done in Unity, even the cinematics. I’m kind of surprised. Unity’s been very good. They have been really cooperative and forthcoming as far as wanting to improve the fluidity of the dynamic animation system. That was important to us. We don’t want pops and shivers. We want our characters to be really smooth and dynamic and tuneable. That required more work from them to help us out at the core tech level. Even at the CTO level, we were getting attention and help.

They had a couple of titles that were prime test cases for their PS4 platform environment. We got to be one of those. Then we say, “Well, on dynamic lighting, the way this is happening, we need to do some more separations at your core so we can get truer dynamic lighting effects and still have big environments.” In my opinion, they’ve been surprisingly helpful. It’s encouraging, looking at them as a tech platform. I’m still trying to figure out their business model. How are they really going to make money? But we’re happy with the result relative to the amount of effort in.

GamesBeat: What are some things you’re able to do a lot better now? Better art is obviously one.

Lanning: If you look at the environments, there’s a lot of things happening back there with particle systems, with ambiance. But to a large degree — Would Stranger run well on Unity? I don’t know. That gets to another level of complication as far as speed and performance and distances. But in this case, the idea of bringing a traditional 2D platformer to 3D, and retaining what made platforming digestible for people, that was an interesting learning experience for us. Why did people want to go back to 2D gaming? That request was coming at us a lot from the audience, now that we’re able to hear the audience.

We felt like, in the way that we’re looking at the world — this isn’t a POV where you can look around 360 degrees — that we could dedicate most of the horsepower into the environments, into the backgrounds. Make them more like true sets, a Hollywood lot set. Then we could absorb the inefficiencies that might be in the engine, without having to do full-roaming 3D that can whip-pan around and needs to operate at 60 frames per second.

To me, the big gains are, we can get a lot more characters on screen obviously. We can tune a lot better because of the dynamic animation system. We can slow it down, speed it up. Every move is tuneable at the character control level. You have to write more routines, but I wanted this really responsive, Mario kind of animation.