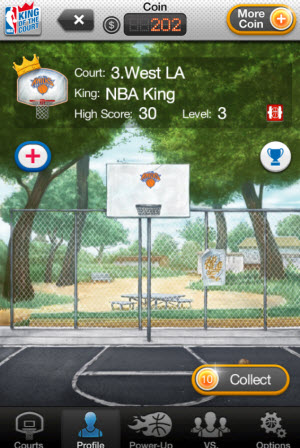 Ogmento, a maker of mobile augmented reality games, announced its new NBA: King of the Court game today. The game was made in partnership with the NBA.

The title is a kind of territorial conquest game meets basketball, with augmented reality that brings your location and objects around you into the game play. This is the second major branded title this year for Ogmento, which previously released an augmented reality game based on the film Paranormal Activity. The deal with the big-name franchise shows that augmented reality on smartphones has a chance to emerge as a gaming sub-genre.

Los Angeles-based Ogmento specializes in augmented reality games, which use your location and smartphone camera to put game-like overlays on the real world. With the new game, Ogmento and its users set up a bunch of basketball courts at locations around the world.

“It creates the feeling that you’re playing a casual pickup game,” said Brad Foxhoven (pictured, right), co-founder of Ogmento. “In Foursquare, people compete for locations. But we let you compete at the location, adding more of a gaming element to it.”

Each player goes to a court and attempts to “rule the court,” much like a user becomes the “mayor” of a location in Foursquare. The player has to shoot a bunch of balls into a basket in a given time in order to take over the court. Once the player succeeds, they can move on to ruling other courts. You don’t always have to be at the exact location, as you can play basketball games from a mile away. But promotions that require you to take some action — such as taking a picture of a can of Mountain Dew at a certain store — can help verify that you are actually at a location where an advertiser wants you to be.

Brian Selzer (pictured, left), president and co-founder of Ogmento, said in an interview that he believes fans will fight each other for control of key courts, such as a court at a hardcore sports bar, or invade enemy territory by taking over a Lakers court with rival Kings colors. Players who rule a territory can collect rent on it, earning virtual tokens. They can also compete at a higher level, battling for the regional, state, or national championships. 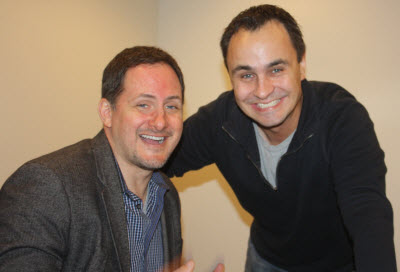 Now that the NBA walkout is over, Ogmento hopes fans will pick up the free-to-play, location-based online game as a complement to enjoying pro basketball games. Players can win in-game coins or purchase them to create defensive or offensive power-ups, which make it easier or harder to take over a court. Players can also customize the courts with the logos of their favorite NBA teams. Later in the season, the NBA will start marketing for the game, which is available on the iPhone and Android smartphones.

Over time, Ogmento will provide updates to the game, including weekly challenges, time-based seasonal competitions, and location-specific promotional partners. Founded in 2009, Ogmento has 20 employees. It raised $7 million earlier this year.

Beyond the NBA game, Ogmento is working on games with other kinds of augmented reality effects. You can, for instance, take a picture of a business card and then attach a virtual object to it, such as ammo. When you give someone your business card, they can take a picture of it and collect ammo for the game, Selzer said.