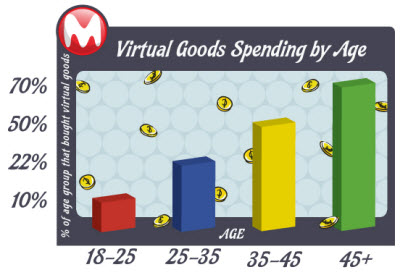 The older you are, the more likely you are to buy virtual goods in mobile social games. That’s the conclusion of a survey by mobile gaming community MocoSpace.

The report found that gamers aged 25 to 35 spend the most time playing social games on mobile devices, but gamers over 45 spend exponentially more on virtual goods than their younger counterparts. The three-month survey polled nearly 500,000 gamers on Boston-based MocoSpace’s network of 22 million users.

The 25- to 35-year-old demographic is by far the most active in social gaming. Players in this age group spent nearly twice as much time gaming as any other group, but only 22 percent of them bought virtual goods. Those 45 and older spent the least amount of time playing games, but 70 percent of them bought virtual goods. It makes sense because older demographics have more disposable income, and younger people have more disposable time on their hands.

The results also suggest that different monetization methods may work for different age groups. If younger gamers spend the most time in games, an ad-based model may be more profitable than a purely virtual goods-based approach.