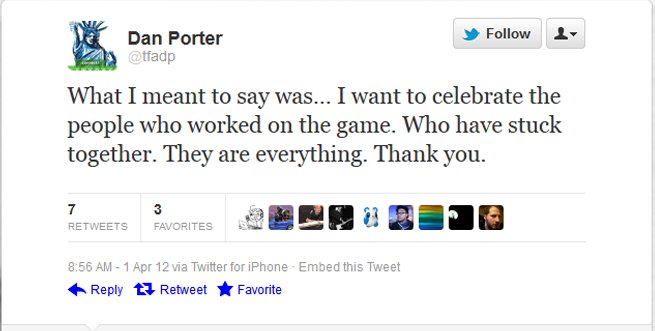 Dan Porter, chief executive of OMGPOP, has apologized for his angry tweeting yesterday.

Early this morning, GamesBeat reported that Porter (whose company developed the Pictionary-clone Draw Something), publicly called out the only employee not to join Zynga after the $180 million-plus buyout. In two different updates (which have since been deleted by Porter), the CEO said that former employee Shay Pierce was the “weakest” person on the development team. Porter also said that Pierce is “selfish” and a “failure.”

“When the game blows up and we have the chance of a lifetime to do something special, and one employee — who didn’t work on the product and is more about his own games than the team — jumps in the press and becomes the story, it is very hurtful to all the people who are on the team,” Porter wrote in an email correspondence with GamesBeat this morning.

On Twitter, Porter has been trying to clean up the bit of mess that his comments have made. Indie darling Markus “Notch” Persson (creator of Minecraft) told the executive, “You’re an insane idiot.”

“It’s been the (sic) craziest ride. So yes, I may be temporarily insane. I just wanted my team who stuck with us to shine,” Porter replied to Notch.

That he wants to make this about the team that transitioned to Zynga is a point that Porter made several times in his conversation with GamesBeat. OMGPOP’s Draw Something has generated so much traffic that it has lifted Zynga’s mobile game traffic by 25 percent.

“When I saw how all the people who actually worked on [Draw Something] felt after [Pierce’s Gamasutra] article, it was very hurtful,” Porter wrote. “It’s grandstanding, and I’m sure I was overly emotional, because I wasn’t thinking about Shay. I was thinking about the people [on the team] who don’t get in the press.”

Porter admitted that the he was harsh in his language describing Pierce. “Yes it was, but my point is that it wasn’t about Shay. It was about the 41 other people who made it happen,” Porter wrote. “Those are the people I would throw myself in front of the train for and those are the people I want to celebrate.”

Another one of Porter’s tweets where he asked people to share the fact that Draw Something added the word Hoodie in the wake of the Trayvon Martin tragedy in Florida. The Martin murder has draw national scrutiny, and the hoodie has become a symbol unifying supporters of the Martin family.

“I was so devastated by what happened in Florida that I wanted to do something through the game which is the main platform we have at the company,” Porter told GamesBeat.

Most criticism for Porter’s hoodie comment was directed at the suggestion that adding the word “hoodie” to Draw Something made the game socially relevant. The CEO defended that comment, writing: “I do honestly feel like [the game] can be socially relevant.”

“I spent almost ten years in educational non profit,” Porter wrote. “I was a public school teacher in Brooklyn. As such, the things I learned working in the south Bronx, east Harlem, and Crown Heights with kids are always with me.”

Porter did tweet a public apology: “I’m sorry for what I said on Twitter last night. No excuses.”