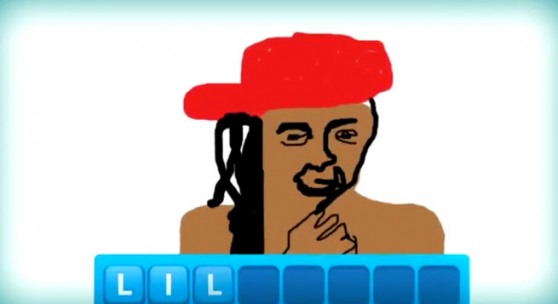 As reported last week, Shay Pierce was the only OMGPOP employee to decline a position with Zynga after it bought the Draw Something developer for $180 million. Pierce wrote an editorial for Gamasutra in which he explained that if he were to accept a position with the FarmVille creator, that he would be obligated to sign away the rights to an iOS game that he authored in his spare time. Pierce refused, writing: “I don’t have a job, but I can sleep soundly at night knowing that I’m not working for any employer with whom I strongly disagree.”

Yesterday, OMGPOP Chief Executive Officer Dan Porter shot off a few messages on Twitter in an attempt to have the last word: 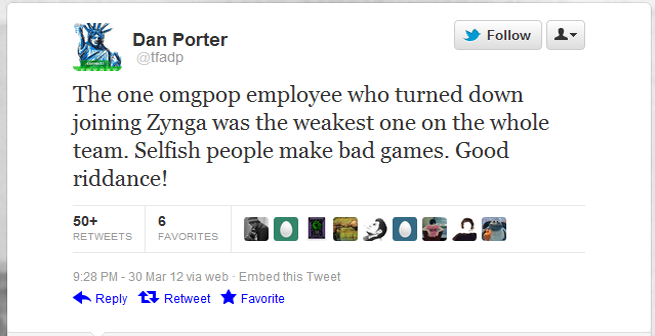 “The one OMGPOP employee who turned down joining Zynga was the weakest one on the whole team,” Porter tweeted. “Selfish people make bad games. Good riddance!”

The deal has been an important one for Zynga because it has increased the company’s mobile traffic by 25 percent.

Porter didn’t stop with that. In another tweet, the CEO said, “What’s so interesting about success is the number of failures who try try to ride on your back. Shay Pierce is just one of many….” Or in other words: They see me drawing something — they hatin’.

Porter’s response to Pierce is being seen by many as petty.

In a response to Porter’s comment, PopCap Director of Editorial and Social Media Jeff Green tweeted, “Time to uninstall Draw Something!” 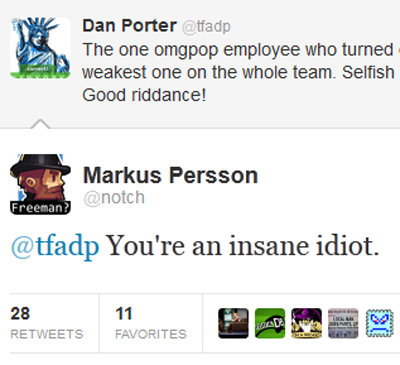 Green is not the only one with a public reaction to the CEO’s opinion on Pierce. In a reply to Porter’s “good riddance” tweet, Minecraft creator Markus “Notch” Persson wrote, “You’re an insane idiot!”

That’s not quite the end. On March 24, Porter wrote, “Games are fun, but they can be socially relevant too. Please share this. At Draw Something, by OMGPOP & Zynga, we just added the word HOODIE.” This was apparently done as a response to the Trayvon Martin shooting in which the unarmed black teenager was shot while walking home from the store. In the wake of that tragedy, Fox News personality Geraldo Rivera infamously said that Martin’s hoodie was as much to blame for his murder as the alleged shooter. The hoodie has since become a symbol of unity for those who support Martin’s family.

While Porter is apparently attempting to engage his product in a social issue, his suggestion that people “please share this” comes across as leveraging a tragedy to promote a game.

Draw Something is one of mobile gaming’s hottest properties right now. The Pictionary-clone is reportedly earning around $250,000 in revenue every day. The OMGPOP success story was capped off when the company was purchased for $180 million (with an additional $30 million in employee retention) by the biggest name in social gaming: Zynga.

After Pierce published his editorial on Gamasutra, Business Insider published a piece from an “OMGPOP source” suggesting that before Pierce turned down Zynga, he was about to be fired. The source claimed he took long lunches and had poor coding. In an email with GamesBeat on Thursday, Pierce attempted to clear up much of the confusion.

“I never received any indication from my manager or company that I was performing poorly and about to be let go,'” Pierce told GamesBeat. “An offer of employment was extended to me, thus I assume that they must have wanted to hire me.”

Pierce also made it clear that he did not work on the Draw Something team.

All of this doesn’t help Zynga with its public persona. Many gamers and developers have accused the company of being evil, as GamesBeat has detailed here. Zynga just paid millions of dollars for someone who is calling a former employee a failure. That can’t help with that persona. Especially if the the negative response to this incident on social media is any indication.

GamesBeat has reached out to Zynga and Dan Porter himself. As of this post, we’ve yet to receive a response.

Pierce decided not to join Zynga in part because he couldn’t get a clear answer on whether he could still own the rights to his Connectrode indie game.

UPDATE: Porter has now apologized for his tweets. And he sent us this email explaining his actions:

Let me share my perspective on the record. The struggle to build and support Draw Something has been an emotionally draining and hard one. Many, many employees gave everything they had to make and support this game as it took off. These are guys and gals who will never be in the press, whose name people will never know but who are the kind of folks who work at omgpop and zynga and make the magic happen. It would not have happened if it weren’t for them.

When the game blows up and we have the chance of a lifetime to do something special, and one employee, who didn’t work on the product, and is more about his own games then the team, jumps in the press and becomes the story, it is very hurtful to all the people who are on team.

Working at a startup and sharing the ups and downs is a very emotional and bonding experience. To survive, everyone has to care about everyone else. When I saw how all the people who actually worked on the game felt after his article it was very hurtful. Sure it’s business. But when you give blood, sweat and tears on something and someone who doesn’t even work on the project, and prioritizes his own games as his own professional development over the team, becomes the story it is very demoralizing. It’s grandstanding and I’m sure i was overly emotional because I wasn’t thinking about Shay. I was thinking about the people who don’t get in the press. When I think about what the team at omgpop gave, yes I get emotional.

In terms of hoodie – I spent almost ten years in educational non profit. I was a public school teacher in Brooklyn. I am passionate about social issues have given almost 1/3 of my professional career to working on creating equal opportunity for folks. I was so devastated by what happened in Florida that I wanted to do something through the game which is the main platform we have at the company. I do honestly feel like it can be socially relevant. I asked folks to retweet not to promote the game but because I felt like every company with a platform should do their best to help recognize social issues and do what is right in the world. I am really lucky that I’ve been able to do both – work with kids directly and work in business. As such, the things I leaned working in the south Bronx, east Harlem and crown heights Brooklyn with kids are always with me.