One of the bigger events of the year in gaming happened with little fanfare yesterday. Machine Zone launched its Game of War: Fire Age on the Google Play store for Android mobile devices.

The mainstream may not be aware, but Game of War: Fire Age has quietly made a bundle of money for Machine Zone since it launched on the Apple iTunes App Store in July 2013. Since that time, other games have come and gone on the top-downloads rankings. But Game of War has consistently stayed in the top five of highest-grossing games on iOS, according to market researcher App Annie. That means that Game of War players are highly committed and they spend a lot of money.

“It will be interesting to see how big it can get,” said Gabe Leydon, chief executive of Machine Zone, in an interview with GamesBeat. “My goal is to get as many people into the world as possible.”

We don’t know how much revenue Machine Zone has generated. But consider this. The three companies ahead of Machine Zone on the top-grossing list on iOS are Supercell, with Clash of Clans; King, with Candy Crush Saga; and Pandora, the music app. Supercell generated $892 million in revenue in 2013 from three games. King made $1.8 bilion in revenue in 2013, mostly from Candy Crush; And Pandora made $637 million in revenues in 2013. Supercell’s revenues (and profits) were so strong that it attracted an investment from Japan’s SoftBank last year at a $3 billion valuation.

As for Machine Zone’s revenues, No. 4 on that list can’t be that far behind. Think Gaming estimates that Game of War makes $566,914 in revenue per day and gets about 18,505 new users in a day. If it held that revenue level for a year, Machine Zone could make $206.9 million in a year from just one game.

And in some places in the world, like Russia, Game of War is the No. 1 title. All I can say is that staying in the top five for a long time means that the company is generated the kind of revenues and profits that console game makers would be very happy to have. 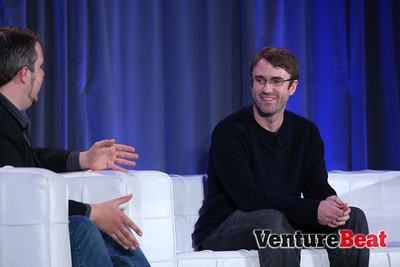 Leydon said that the team took a while to make the game because it want to make sure that it worked on as many Android devices as possible. That kind of engineering isn’t easy.

The game will run on Android 2.3 devices and up. It is identical in every way to the iOS version.

“We are putting everybody who has a mobile device into one mobile world,” Leydon said. “That’s a big deal, and we had to do quite a bit of work to get ready for it. I think this is the first app of its kind to do this on this kind of scale.”

During beta testing, Machine Zone saw that volumes related to Android are big.

“We are learning to build these massively scalable MMOs on mobile,” Leydon said.

Leydon made some huge bits on creating Game of War, which is a fantasy role-playing world where battles occur in real-time. Most other mobile games have asynchronous play, where one player moves at a time.

“We broke a lot of rules about the common conceptions of what a mobile game should be,” Leydon said. “People said mobile games should focus on short play sessions. We didn’t do that.”

Leydon also created a translation engine that included crowdsourced translations by players for local territories. That made it easier to have clans that operated 24 hours a day as each time zone rotated the watch over a fantasy kingdom.

About 80 employees worked on the iOS version of Game of War for 18 months. To finance that, Leydon had to raise $16 million in venture capital. The investment paid off, and Leydon said the Game of War team is even bigger now. Machine Zone now has 150 employees, many at its headquarters in Palo Alto, Calif. The company still operates 11 other iOS games.

But Leydon said his company is focused on Game of War and making it bigger. Looks like the company has founded its Clash of Clans. And we’ll see how long Leydon’s empire will last. Leydon said there are lots of expansions to come. The game has just launched in Japanese and in Korean, and it hasn’t been translated to Chinese yet.

As for being in fourth place?