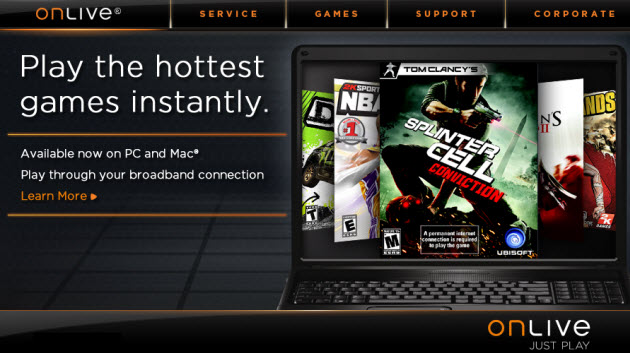 Online game company OnLive‘s latest valuation is an estimated $1.1 billion, after taking investments from new investors BT and the Belgacom Group this spring, according to a regulatory filing.

The valuation confirms that OnLive is one of the hot properties in the burgeoning game business. In June, the Palo Alto, Calif.-based company launched its online game service that delivers high-end games instantaneously to users by exploiting cloud computing and compression technologies. It is potentially disruptive because it can distribute games directly to users and cut game retailers out of the picture.

OnLive isn’t commenting on the filing with the state of Delaware. And the document isn’t clear on the details, such as who made the investments that triggered the filing. But the $1.1 billion valuation can be inferred from OnLive’s publicly stated information. In May, the company said that BT and Belgacom Group each acquired 2.6 percent stakes in OnLive. The Delaware filing dated May 6 says that OnLive had issued 8 million new shares in preferred stock. That was out of a total share count of 342 million shares. Based on the facts available, it’s reasonable to assume that the $1.1 billion valuation is accurate, said Justin Byers, analyst at VCExperts.com, which discovered the filing.

The 8 million new shares were valued at $7.50 a share, or about $60 million. That means the 2.6 percent stakes of BT and Belgacom are each worth $30 million. Based on that valuation, the entire company is worth about $1.1 billion. That’s a pretty hefty valuation for the Palo Alto, Calif.-based company, which only recently began generating revenue after more than eight years of development. There is a chance that the valuation is $2.2 billion, if this filing refers to only BT or Belgacom, and not to both of them. But that seems unlikely.

Both BT and Belgacom are looking to launch OnLive services in Europe. Other investors include AT&T, Warner Bros., Autodesk, Lauder Partners and Maverick Capital.

OnLive is the company to beat in games on demand. Rivals include Otoy, Gaikai, InstantAction, and GameStreamer. OnLive, founded by entrepreneur Steve Perlman, has more than 20 games available from game publishers such as Electronic Arts Ubisoft, Take-Two Interactive and THQ.

OnLive’s basic technology is compression, which squeezes game data into a compact form so that it can be transferred over a broadband connection to a server, where the data is computed. Then a video is sent back over the broadband line to the user’s computer. OnLive tries to make this round-trip happen so fast that the user doesn’t notice that the computing is happening in the cloud rather than on the user’s own computer.

Gamers can buy and start playing a game almost instantly; that upsets the retail market. Meanwhile, since the heavy-duty processing takes place in servers in a data center, OnLive allows gamers to play on relatively simple hardware. You could play a high-end game like Mass Effect 2 on a netbook or laptop without heavy-duty 3-D graphics chips in them. Or, you could use a Micro Console TV Adapter from OnLive, which converts the images so they can be displayed on a screen; hence, you could play a high-end PC game on your TV set, using only the Micro Console.

The OnLive Game Service lets gamers discover, explore, purchase and play video games. Much like the Netflix DVD rental service’s online component, it lets you play games on the network instantly. You simply click on an icon for a game and it launches over the broadband connection.