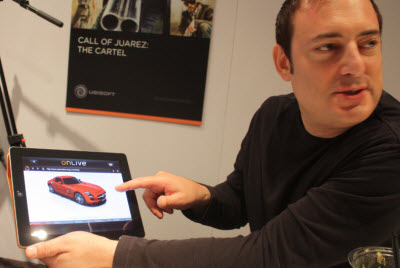 OnLive announced today that it can run high-quality video games on tablets.

The company’s online games-on-demand service can also render Adobe’s Flash multimedia format on an iPad or Motorola Xoom tablet. Steve Perlman, chief executive of OnLive, said that the iPad, Android tablets and big-screen TVs will be able to run OnLive’s service in 2011.

OnLive launched its service on the PC in 2010. That service uses compression and datacenter-based computers to enable players to play high-end games on low-end computers. The computing of the game is done at the internet-connected data center, and only compressed video images are sent to the user’s machine. That means gamers can use any low-end client, such as tablets, smartphones, TVs or computers.

HTC said that it will include OnLive’s service on smartphones and tablets that it will release later this year. HTC, one of the biggest smartphone makers, has invested $40 million in OnLive. OnLive is calling the portable app the “OnLive Player App,” which runs OnLive’s 100-plus games on Android tablets and the iPad.

Perlman demonstrated that Ubisoft’s From Dust game can run on a tablet even though it was designed for the consoles. That game has an intuitive user interface that makes it almost look like it was designed to run on OnLive on a tablet, Perlman said.

“It’s no longer about whether this will work,” Perlman said. “It’s about how big this will get.”

One of the cool things OnLive can deliver to tablet users is a high-speed 10-gigabit-per-second cloud-based browser for the iPad, Android, and connected TVs. The result is extremely fast internet connectivity for tablet web users. The tablets are capable of running Adobe Flash at high speeds, as you can see in the demo below.