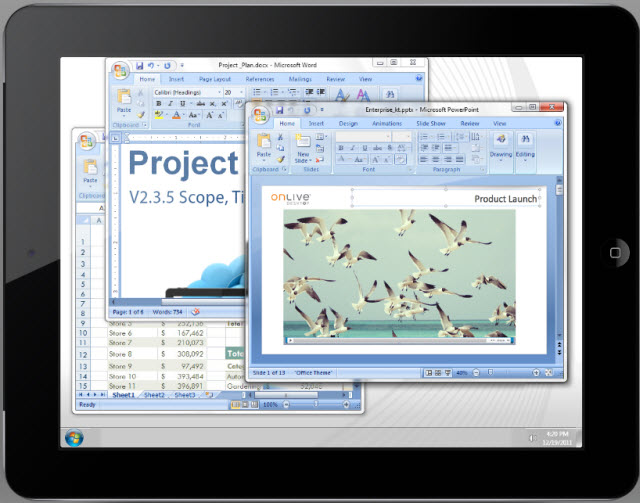 Delivering on one of the big promises of its cloud-streaming technology, OnLive is announcing today that its OnLive Desktop app will give iPad users full access to desktop applications such as Microsoft Word using high-speed streaming technology. The cloud service is potentially disruptive to a number of different parties in the documents ecosystem.

That means that Windows desktop applications that are stored and executed in OnLive’s cloud — web-connected data centers — can operate as quickly and responsively as if they were stored on the user’s own computer. OnLive is taking the same network that it built for streaming high-end games to low-end computers and is using it to stream productivity apps to both consumers and enterprise users. OnLive will also deliver lightning fast web browsing. If it takes off, it could create a whole new revenue stream for Palo Alto, Calif.-based OnLive.

The streamed apps aren’t stripped-down Office apps or clones of Microsoft’s software. Rather, they are full-featured, media-rich Windows 7 applications, including Microsoft Word, Excel and Powerpoint software. They are remotely hosted on powerful PC servers in the cloud. But they are instantly accessible over broadband connections, including home broadband connections or WiFi connections for mobile devices such as smartphones and tablets. That means you can access the full functions of Microsoft Office, reading or creating documents, while on the run. 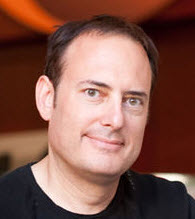 If it really takes off, OnLive Desktop is ultimately a threat to Intel’s consumer microprocessor business, since users will be able to access demanding applications with low-end hardware. They may have no reason to use a high-end PC to access a lot of heavy-duty applications. This phenomenon, envisioned many years ago by visionaries such as Google Chairman Eric Schmidt when he worked for Sun Microsystems, is known as “hollowing out the PC.” It means that heavy-duty internet-connected servers, or the cloud, could reduce the need to have a lot of processing power in a PC. The more powerful the cloud, the less power you need in your PC.

Steve Perlman (pictured), chief executive of OnLive, started patenting the ideas for this kind of produce as far back as 2002. He recently showed VentureBeat a variety of apps, from Microsoft Word to Autodesk software, working via cloud streaming. The software ran efficiently and smoothly. OnLive will be showing the service at the Consumer Electronics Show in Las Vegas.

The OnLive Desktop allows you to combine the touch gestures of a tablet with an on-screen Windows keyboard and handwriting recognition. That lets you conveniently view and edit complex documents on a tablet with the same efficiency as if you were editing them on a PC. Rich media such as video, animation, slide transitions and games run smoothly, said Perlman, in an interview.

This OnLive Desktop app promises to make the remote access of PC applications into a much better experience, compared to rival solutions such as running a virtual desktop via Citrix, which lets you log into a remote server to access your desktop documents. Usually, it takes a while to log into such services and the responsiveness is frustratingly slow. With Citrix or other desktop virtualization services, it’s not surprising to see cloud access work at a speed of a few frames per second, while OnLive Desktop is expected to enable high-definition services at 30 to 60 frames per second. It takes as little as 17 seconds to log into an OnLive Desktop account.

“If you’ve got a PowerPoint presentation embedded with videos and transitions screens, it works perfectly with OnLive Desktop on an iPad,” Perlman said.

Perlman said his team has been working on making the streaming of productivity apps for nearly a decade. The company launched its OnLive games-on-demand service in 2010 and made it more accessible across wireless devices in 2011. Now it is moving on to a major new market for enterprise users. Games were the most challenging apps to enable with cloud streaming, and once that was done, it was relatively easy to enable the less-demanding productivity apps, Perlman said.

“Potentially though, productivity apps are a much larger market than games,” Perlman added.

For consumers, the free OnLive desktop app comes with 2 gigabytes of secure cloud storage, and access to a desktop depends on whether the server computing power is available to deliver Windows 7 apps including Microsoft Word, Excel, and PowerPoint. You can use instant-response touch gestures such as pinch and zoom, flick to scroll, drag and drop while manipulating Office files. You can create, read or edit Word documents as needed. Perlman said OnLive is starting with an iPad app, but Android, smartphones, PC, Mac and TV access will follow shortly. That means you’ll be able to log into your cloud files and access them from any device. Perlman said OnLive recommends users access OnLive Desktop via WiFi or 4G solutions, but not 3G. In general, it works better on less-congested, faster networks.

A paid version, OnLive Desktop Pro, is also coming soon with 50 gigabytes of cloud storage, priority access to apps at any time, full-featured accelerated web browsing (at a speed of 10 gigabits a second), and other features for $9.99 a month.

Another tier of service will be available for big businesses with 100 employees or more. OnLive Enterprise will enable businesses to access centralized, secure computing resources. It will also let software vendors deliver custom applications to enterprises easily via the cloud. With OnLive Enterprise, IT departments can set policies for user privileges (for example, you can’t play games during work hours) in a variety of work settings, such as branch stores where workers could use tablets to access a store’s pricing system. A hospital, for instance, can offer low-level patient information to a receptionist and a full file of data on patients for a doctor. Once the user logs out, there is no user data left stored on the device, so records remain private and secure if the device is lost or stolen.

Enterprises can also use a full-scale web-based collaboration service provided by OnLive. The service is much like the massive spectating arena in the OnLive Game Service, where a gamer can watch someone else’s multiplayer game in action. With the collaboration service, users can chat with each other and watch as someone is creating or sharing a document. The collaboration tool works as a virtual shared whiteboard among small work groups that are geographically dispersed.