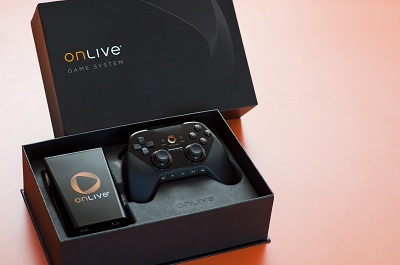 In a move aimed at disrupting the game console market, gaming startup OnLive announced that it is beginning pre-sales today for its MicroConsole, which allows you to play games-on-demand on a TV.

The MicroConsole TV adapter and a wireless controller will cost just $99, and yet it will allow gamers to play high-end computer games on flat-panel displays in 1080p high-definition running at 60 frames per second, or faster than a blink of the eye. OnLive will start delivering limited quantities of the Onlive Game System starting on Dec. 2. For the holidays, the company is offering a free game with any OnLive Game System purchase.

OnLive launched its instantly playable server games in June. But the MicroConsole represents the fruition of entrepreneur Steve Perlman’s vision to turn the video game industry upside down. If it truly works, the cheap MicroConsole hardware could potentially eliminate the need for players to keep buying more and more powerful and expensive game consoles.

The disadvantage for the console rivals is that they will never be able to match the low costs of OnLive’s MicroConsole, given the simplicity of OnLive’s client hardware. Even the relatively cheap Nintendo Wii costs $199, and its performance isn’t as good as OnLive’s in terms of quality of graphics. This bold strategy explains why OnLive was valued at $1.1 billion during its latest investment in the summer.

“It marks the beginning of a new era,” Perlman said in an interview.

The OnLive system uses a cloud-based design to allow it to deliver high-end games on low-end hardware. Current consoles such as the Xbox 360 do all of the serious computing of games on the console itself. But with OnLive, the games are processed in the cloud, or web-connected data centers. Those images are then sent at lightning speed over the broadband connection to the MicroConsole, which adapts the images so they are properly displayed on the high-definition TV.

Normally, web connections are too slow to handle so much data. A lot of skeptics said Perlman’s scheme would never work. But OnLive has worked for more than eight years on its data compression technology so that it can make the games instantly playable, as long as the MicroConsole is connected to a data center that is less than 1,000 miles away.

The MicroConsole itself is just a tiny pocket-sized box connected to broadband, with a high-definition multimedia interface (HDMI) connection to your TV. The MicroConsole adapts the images to your TV screen. You can play pretty much any game that runs on the PC as long as the game publishers have authorized the game for TV play. As many as 35 titles are expected to be available at launch. Those games could be better and newer. But that is a problem that can be fixed over time.

Beyond enabling players who can’t afford consoles to play premium games for a lower price, OnLive lets you log in from any computer and play games on a PC or laptop. You can also play those same games in your living room on the TV now, without ever having to load a disc or download a copy of a game. You can also be a spectator, watching live multiplayer games in progress and move from game to game as if you were surfing channels on TV.

I tried out the MicroConsole, and it works as advertised. Within ten or 15 seconds of activating OnLive, I was playing a tennis game with the wireless controller. There is no frustrating load time. The console is silent, with no noisy fan. And it is so small it doesn’t take up space on your entertainment center.

The set-up is hassle free. You connect the MicroConsole to the internet and your TV. Within minutes, you can browse OnLive’s Marketplace and play games instantly. The wireless controller has media controls to enable one-touch Brag Clip video recording, which lets you to take a video of your exploits to share them with friends.

Up to four OnLive wireless controllers can be used at the same time. You can also attach your own keyboard and mouse if you care to. Perlman says that the performance of OnLive will improve with time, as the company can easily make changes by upgrading its hardware or software in its data centers. OnLive can improve its game performance without revamping its hardware. The one thing that OnLive lacks now is motion-sensing hardware. But that could conceivably be added sometime down the road.

You can demo games for free, rent them, or purchase them. Rentals cost $3.99 to $8.99. Full game purchases range from $4.99 to $49.99. Later this year, OnLive will add a monthly flat-rate subscription plan. Those pricing models are aimed at tempting users who aren’t exactly sure how much they’ll play a given game.

“For those who want an all-you-can-eat plan, we offer it,” Perlman said.

To publicize the launch, OnLive will be launching TV commercials and other ads. I don’t expect OnLive to make too big a splash because its MicroConsole won’t be widely available. But it’s time for the console makers — Microsoft, Sony and Nintendo — to pay attention because they have a new competitor.

Palo Alto, Calif.-based OnLive now has more than 200 employees. Investors include Warner Bros., Autodesk, Maverick Capital, AT&T, British Telecommunications, and the Belgacom Group. In other news, Perlman showed how OnLive can run in demo mode on an iPhone or iPad. He also showed it working on Android version 2.2.