The group of gamers responsible for half of all in-game revenue in mobile titles is frightening because it is so narrow, according to a survey by Swrve, an established analytics and app marketing firm. About 0.15 percent of mobile gamers contribute 50 percent of all of the in-app purchases generated in free-to-play games.

This means it may even more important than game companies realized in the past to find and retain the users that fall into the category of big spenders, or “whales.” The vast majority of users never spend any money, despite the clever tactics that game publishers have developed to incentivize people to spend money in their favorite games. 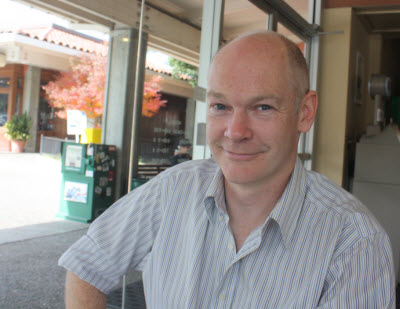 Above: Hugh Reynolds of Swrve

There’s good news, and there’s bad news in this, acknowledged Hugh Reynolds, chief executive of Swrve, in an interview with GamesBeat. That means that some people, known as “whales,” account for a huge amount of purchases in mobile games. These people are very valuable users who are single-handedly making games profitable so that game companies can make a lot more games for those people who don’t pay anything.

On the negative side, there are a lot of people who have become accustomed to paying nothing at all for their mobile games. For game companies that depend on in-app purchases in their free-to-play games, that can be a nightmare.

“People are very mobile, and they have a lot of options,” Reynolds said. “Trying to capture them is becoming more and more difficult.”

The only way to monetize these players is through advertising, or, in the wider view held by Ninja Metrics chief executive Dmitri Williams, by getting these non-payers to influence other players to pay. Williams, who gave a talk at the recent Casual Connect Europe show, refers to these players as “social whales” because they have an outsized impact on player behavior.

Reynolds said that only 1.5 percent of active players surveyed in January actually made a purchase in that month. About 50 percent of revenue comes from the top 10 percent of the players who do make purchases. Expressed as a percentage of players, this group of big spenders represents just 0.15 percent of the total. It makes sense for game companies to identify these spenders and target them with incentives, but they shouldn’t be the sole target of campaigns, Reynolds said.

“The problem is you only see the whales, or high rollers, in retrospect,” he said. “So you target a group and will find your high roller is in there.”

Of the people who pay, 49 percent make just one purchase during a month, while 13 percent of paying players make five or more purchases. A significant amount of that spending activity takes place within the first 24 hours the game is played. For the players who make a second purchase, the average time lapse between the first and second purchases is a mere 1 hour and 40 minutes.

“That means getting people to make that first purchase is a critical thing,” Reynolds said. “For the second purchase, timing is equally important.”

Meanwhile, 53 percent of players who make a purchase go on to make a repeat purchase within 14 days, while 47 percent do not. 13.7 percent of new players accrue more than four purchases in their first 14 days. Of the revenue accrued in the first 14 days of a player’s activity, over 60 percent is accrued on the first day of play.

The average value of an in-app purchase is $5.94, while purchases between $1 and $5 represent a majority, or 67 percent of purchases. Items that cost more than $50 in a game account for 0.7 percent of all purchases and contribute 9 percent of total revenue.

The data comes from the San Francisco company’s first mobile games monetization report, which will be available on a monthly basis going forward. Swrve surveyed user data from tens of millions of users. It measures about 2 billion events a day in mobile apps. Swrve takes that data and helps companies create in-app marketing campaigns. It’s good to keep in mind that the numbers are averages, and some companies are much more successful than the average.

“The actionable strategy from this data is to make it very easy for a user to become engaged and invested in a game,” Reynolds said. “You should have very easy first purchases. Then the odds of them going on to make a higher purchase is so much better. You also have to be really timely in communicating with users.” 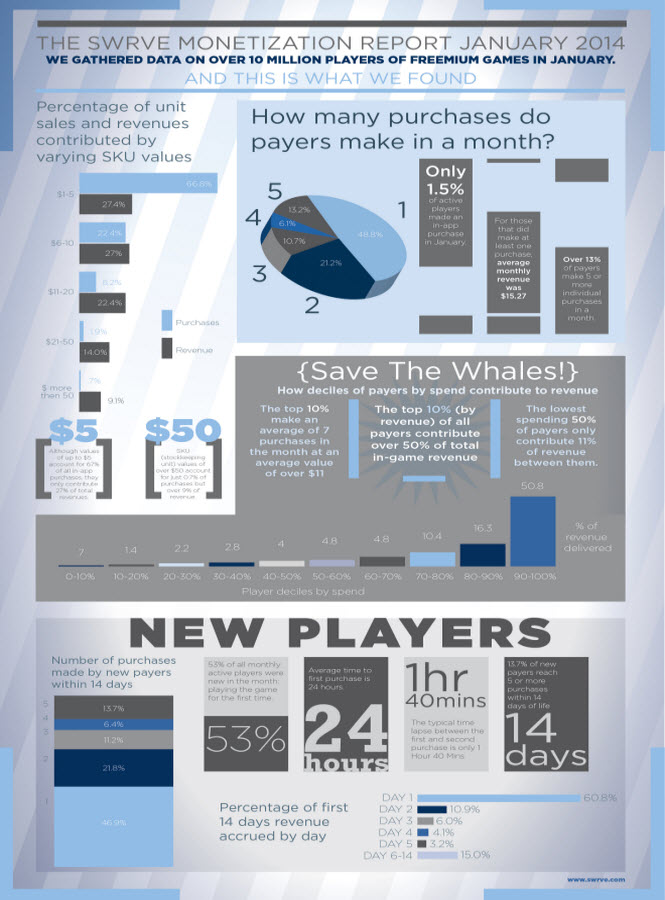