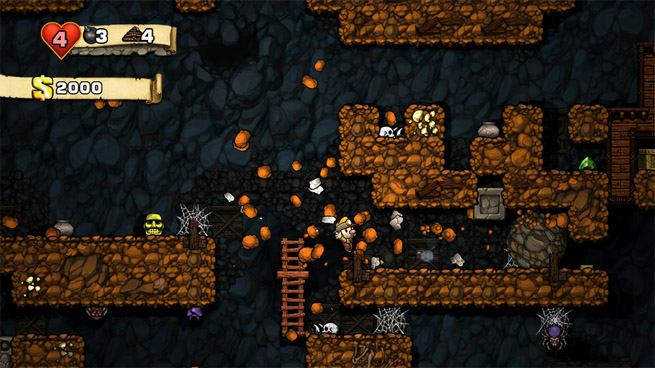 I hate having to start over from stage 1-1 every time I die in Spelunky, the new Xbox Live Arcade platformer from developers Derek Yu and Andy Hull, yet I keep playing. As much as I loathe the game’s music and touchy controls, the game’s mysteries fill me with enough curiosity to try again.

Spelunky is about an explorer who gets trapped in a series of caves. His goal is to collect as much treasure as possible while avoiding death at the hand of monsters and booby traps. The caver can regain health by saving a damsel in distress, but if he loses all his hit points, then the game will return him to the very beginning and strip him of all his items. But no two runs of stage 1-1 are ever the same because Spelunky randomly generates each level every time. 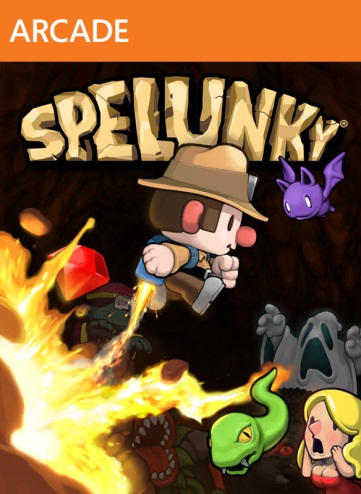 A tough challenge and leaderboard chasing
Microsoft forces every Xbox Live Arcade release to include a leaderboard, which makes sense in some cases. In others, it is practically meaningless. No one is bragging about being on top of the Fez leaderboards because the challenge of that  game is in solving puzzles. Spelunky’s difficulty lies squarely on the shoulders of its platforming mechanics.

Topping all of your friend’s scores in something this arduous is an accomplishment that all can instantly recognize.

I hate the endless caves, the merciless traps, and the deadly monsters, but I feel like I’m supposed to hate them. The fun is in the posturing to friends: “Oh, you don’t know how to get past a caveman? How cute.”

These caves are filled with unknown wonders and quirkiness
Developer Yu’s original PC Spelunky didn’t have Xbox Live’s built-in leaderboards, so the score-chasing hook wasn’t as sticky as it is here. To keep players interested, he imbued his subterranean world with devious traps and unexplained items.

Early in the game, a subtle stone formation was giving me a hell of a time. It would fire an arrow at me whenever I fell in front of it. I tried running and jumping to see if I needed to speed by it, but nothing like that would prevent the arrow from bludgeoning me with the force of a Mike Tyson uppercut.

Eventually, I was carrying a damsel in distress when I was caught between a jumping spider to the right and one of these projectile walls to the left. In order to fight off the spider, I threw the damsel (I know), and she accidentally fell in front of the trap. This set it off (killing the damsel), and I suddenly understood. I realized that I could throw anything (stones or pots) in front of the trap to spring it. It was a moment of revelation that I repeated many times in the game.

The game leaves it up to the player to figure things out. Nothing ever explains how to use the teleporter item. I spent 10,000 gold on a camera and immediately took a picture of the shopkeeper. That angered him, and he killed me. I still don’t know what I’m supposed to do with the camera.

That brings me to my favorite part of the game. It’s so damn quirky, and some may say weird. For example, to carry the damsels in distress to the exit you have to knock them out. If they take too much damage, they’ll die…but you can still use the damsel’s dead body as an item to activate booby traps. This was hard to explain to my girlfriend who was watching.

The controls are touchy
This is already a difficult game, but it isn’t made any easier by its touchy controls. Walking without holding the right trigger to sprint is too slow, but sprinting makes the hero fly wildly across the screen. The standard whip attack feels like it should just reach a few pixels farther, and will get you killed when you think it should have hit an enemy that it doesn’t. Picking up items requires a combination button press, but the game doesn’t use the left trigger or bumper for anything at all.

It piles on an extra layer of frustration on top of an already difficult game.

A lot of the visuals and music are bland
I prefer the look of the original PC game. It had a pixel-art look that indie games may overuse, but it had a lot more character than Spelunky for XBLA. The music is the same way. The developer replaced a chiptune score with a weird synthesized soundtrack that does nothing for me.

If you have a group of friends that you can chase on the leaderboards, then I can see Spelunky justifying its $15 price tag. That is the extent of the online multiplayer, as the game’s co-op mode is local only.

I really do hate Spelunky. It is frustrating in a way that few console games ever are. It’s audio-visual trappings don’t really help the matter for me, but the sense of discovery has me intrigued to find out what happens next. That doesn’t make Spelunky a good game, but I can’t wait to get back to playing it.

Spelunky will be released on July 4, 2012 for the Xbox 360’s Xbox Live Arcade download service. An Xbox 360 download code was provided by the publisher for the purpose of this review.