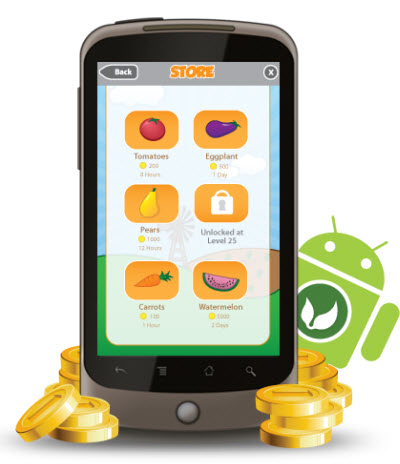 With Google’s Android mobile platform adding 400,000 new devices a day, it’s clear the platform is becoming a lot more attractive to developers. In recognition of that, game network OpenFeint is launching its free-to-play monetization platform for Android games. That’s another measure of how Google’s mobile ecosystem is catching up with Apple’s.

OpenFeint is launching its OFX platform for Android, which enables developers to launch free-to-play games, where users play for free and pay real money for virtual goods, on Android devices. Google has launched its own in-app purchases, but OpenFeint tries to make its similar platform more robust.

OpenFeint’s OFX gives developers more to work with via its virtual economy management system that helps them build more profitable games. Open Feint, based in Burlingame, Calif., launched its iOS (iPhone etc.) version of OFX in beta form in February, 2010. Version 2.0 of OFX launched on iOS in February. Now, about 40 percent of all Apple game downloads are free titles with in-app purchases, according to Xyologic.

Google is starting to make life easier for game developers, according to panelists who spoke at a panel sponsored by Tapjoy this week in San Francisco. But OpenFeint believes it can still add value in this space and eventually help developers create massive hits that can monetize the same way that Zynga games monetize on Facebook.

OpenFeint is launching a private beta version of OFX for Android now. It helps developers run their own virtual stores, stocking and selling virtual currency and goods. They can analyze the performance of their apps in real time and modify them in real time. Jason Citron, chief executive of OpenFeint, says that in-app purchase systems are like credit card machines. They’re necessary to process transactions but somewhat useless without a store around.

“OFX makes it easy for any game developer to build that store and have confidence in its ability to scale as they snag millions of DAUs (daily active users),” Citron said.

OFX will use Google’s in-app purchase system to process payments in the private beta. But future updates will support alternative payment providers, like mobile payments firms.

Shainiel Deo, CEO of developer Halfbrick Studios, said his team would rather focus on making games instead of the complex scalable server architecture that OpenFeint has built. So Halfbrick is implementing OFX for Android. Japan’s Gree mobile social network recently purchased OpenFeint for $104 million.