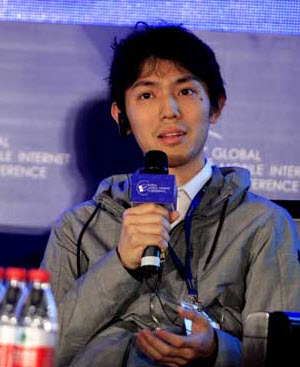 OpenFeint‘s co-founder Jason Citron has left the company and is pursuing new opportunities. He will be replaced by Naoki Aoyagi (pictured right).

OpenFeint is one of the early successes in mobile games, proving a platform for making mobile games more social through leaderboards and challenges. Aoyagi will serve as the new CEO. He was previously head of Gree International, a division of Japan’s Gree. Gree purchased OpenFeint earlier this year for $104 million. That made a nice jackpot for 26-year-old Citron.

“In just over 24 months, OpenFeint has grown to over 120 million users across 7,000 games,” Aoyagi said. “I thank Jason for his leadership growing the company and wish him well in his new adventures.”

I had heard a rumor that Citron (left) had been fired yesterday and asked OpenFeint about it. The company didn’t answer until it made the announcement about Aoyagi’s appointment today. Citron didn’t return a request for comment and the company declined to make anyone available for an interview. Aoyagi has a decade of experience in financial operations and management in the tech industry.

Both OpenFeint and Gree plan to announce their plans for integratio between the U.S. operations of both companies over the next few weeks. When OpenFeint was first acquired, Citron had said that OpenFeint was going to handle the U.S. strategy for the company.

Gree was founded in 2004. When Aoyagi joined it in 2006, he was the 10th employee. When I interviewed Aoyagi at the Casual Connect show in Seattle, he was very enthusiastic about how the excitement — and high monetization — of the Japanese mobile games market would eventually develop in the U.S. Gree is expected to generate about $1 billion to $1.5 billion in revenue this year, thanks to the heavy spending habits of its 25 million or so Japanese users.

OpenFeint accumulated a lot of partners in the past few years, but it had very little revenue when it was acquired. If OpenFeint’s users turn out to be as easily monetized over time as Japan’s then the company could see great growth times ahead. Gree competes with DeNA, another billion-dollar company in Japan, which acquired Ngmoco last year for $403 million.