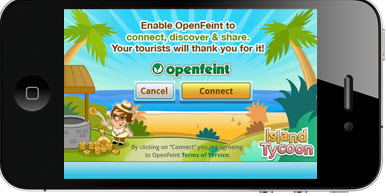 Apple’s announcement caused fear among developers because many use this unique device identifier (UDID) number to identify a user in order to quickly access that person’s history and offer cross promotions. Apple decided to “deprecate” the UDID, meaning the company will phase out the use of the feature and no longer support it at some point in the future. Apple gave no explanation for the deprecation, but some speculated it was to end concerns about privacy.

“Developers have been panicking to some extent,” chief executive of OpenFeint, Jason Citron said. “That is why we decided to do this product.”

OpenFeint, which is owned by Japan’s Gree, said it already has 115 million users logging into games that use the OpenFeint mobile social gaming network for online play and leaderboards. Third-party app developers can now use the OFUID (OpenFeint user identification) to identify users in the same way that Apple did with UDUDs.

When a user starts playing a game or app with the OpenFeint system built-in, OpenFeint asks them to sign into their account. It asks the user if they want to access online play. If the user answers yes, OpenFeint signs them in and the app developer can get access to the player’s anonymized data and history, Citron said. OpenFeint has more than 6,800 games using its platform.

That’s certainly better than the alternative, where developers would have to create their own identification system requiring users to sign in with a username and password before playing a game. OpenFeint removes some of the potential hassle with a more streamlined sign-in system.

It isn’t a perfect replacement for UDID, which was able to log every time a user started a game. The OFUID can only gather information when the user logs into OpenFeint. That doesn’t happen every time a user plays a game. But Citron said this was the next best thing, as “the user can opt in with just one click.” The user has to have the OpenFeint app in order to sign in. However, to play online, users often have to download the OpenFeint app anyway.

The OFUID will give developers access to information such as what games are installed on the user’s phone, their usage of games, and what offers they have taken before. Developers would have otherwise had to figure out a way to do this on their own. To create the workaround, Citron said OpenFeint engineers had to figure out a way to do the single sign-on without using UDID numbers. Citron said that developers who use OpenFeint can learn how to better monetize their users with better targeting.

OpenFeint also announced an “install trade program” for developers that use the new sign-on process. OpenFeint will guarantee developers 1.5 new installs for every new install of Game Channel, an app that is needed for users to enjoy the benefits of single sign on. Game developers will be able to offer incentives for users to use the sign-on process, said Ethan Fassett, senior vice president of product at OpenFeint.

The single sign-on with OFUID will launch later this fall. Citron said that OpenFeint does not make money on this feature. On Android, Citron said that there are fewer restrictions related to the use of a UDID. But OpenFeint also offers its own single-sign-on process there.