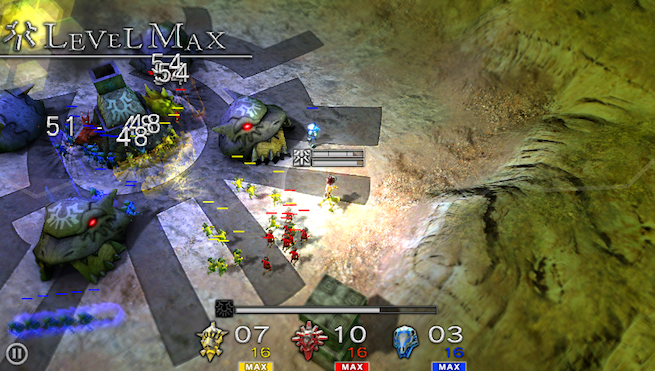 Creating a game is extremely tough. Creating a game when you don’t know how to go about implementing your idea is even tougher. That’s the challenge that creative director at (developer) Acquire Richie Casper faced when trying to make Orgarhythm, a new title for the PlayStation Vita that combines real-time strategy (RTS) gameplay with the rhythm genre.

“When we had the idea of merging two genres, you know, rhythm and RTS, we were like, ‘Okay, how is this gonna work? What are we gonna do?’” said Casper.

“The first idea we came up with was: Since we’re making it for PS Vita, we need to come up with some kind of a touch mechanic,” said Casper. However, the original idea was nothing like the end result.

The player was going to have a home base tower that they would begin from, according to Casper. “You would do three taps. You’d tap the tower first. Then you would do another two taps to create a triangle. What that would then do, is basically, you would conquer land.”

He explained that the player was to take over land by tapping out these triangles to the beat. After creating their triangle with three taps, the player was given a window of time to touch the back panel of the Vita to create units, “and the unit creation would be based on the types of land you conquered. If you got land close to volcanos, you would create your fire people…same with river lands.” Once the player built their army, they would attack the enemy. 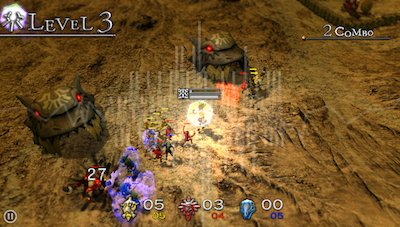 “The problem is that once we built the prototype, it didn’t work,” said Casper. “The gameplay mechanic wasn’t fun. We realized, ‘Okay, this doesn’t work as well as we’d thought,’ and we had to go back to the drawing board.”

The game wasn’t Casper’s idea of fun. “It ended up being way too complicated; it was just two games that we kind of smashed together.”

At the time, the game had a completely different visual style, and the team felt it had to be completely revamped. It ended up being more visually inspired by ancient Mayan cultures. The original design was going to have a medieval, fantasy-type look, but the team wasn’t satisfied with it. It then took them “a couple of months” to figure out how to make the game work.

His team had to take a step back and think about their project, and that’s when Tak Hirai at Neilo (pronounced Nay-lo) stepped in with his idea, which became the current game. Acquire’s president knew Hirai, and his team was available. “It just kind of fit,” said Casper. Hirai is best-known for his work as the lead programmer of Dreamcast classics Shenmue and Space Channel 5.

In Orgarhythm’s current state, players assume the role of the God of Light, and battle against the God of Shadow. Everything is controlled via the touch screen by tapping menu items to the rhythm of the background music, which encompasses a range of trance-style electronic beats. The God of Light walks along a pre-determined path while the player focuses on selecting units and attacks to defeat enemies.

“So it evolved from quite a different game,” according to Casper. “We drastically simplified the gameplay, but in a good way.”

“It’s cool being able to work [with Neilo]…have them basically make a game out of two words,” said Casper, referring to the merging of strategy and rhythm.

Casper is brutally honest about the game, he says he just wanted to make something different, and that combining rhythm with strategy seemed like the way to go.

“To be honest we have no idea how well it will do,” he said with a laugh, “hopefully this will resonate and find a good audience.”

So far, the changes seem to have worked. According to Hirai, Sony Computer Entertainment was interested enough in the title to feature it at their booth at the Electronic Entertainment Expo (E3).

Orgarhythm is set to arrive as a digital download for the PlayStation Vita this summer.

Update: We were contacted by XSeed’s external PR agency for clarity. Acquire is the Japanese publisher of Orgarhythm. However, Richie Casper was directly involved with the development of the title and worked as creative director. Neilo co-developed the game with Acquire.