Osmo has made its name creating augmented reality iPad games for children, and today the Silicon Valley company is launching the result of its collaboration with Mattel: the Hot Wheels MindRacers AR racing game that lets you combine physical toy cars with an iPad app.

The combination is the latest hybrid of games and toys in an effort to reach a new generation of kids who are more inclined than ever to choose digital playthings over physical ones. Mattel joined a $24 million investment round in December, and Palo Alto, California-based Osmo embarked on design of a new kind of game based on the 49-year-old Hot Wheels brand name. This is the first collaboration between Silicon Valley’s Osmo and a major toy brand.

Osmo’s tech brings toy cars to life. To set up MindRacers, you put the iPad on a special stand that includes some slots and short tracks for Hot Wheels cars. Two players can race each other on the iPad screen, which includes Osmo’s mirror, which points the iPad camera at the space in front of the iPad.

“This is a very different project for us to work with a brand that is nearly 50 years old,” said Pramod Sharma, the CEO of Osmo, in an interview with GamesBeat. “With multiple generations of Hot Wheels fans, we think that parents will like it, too.” 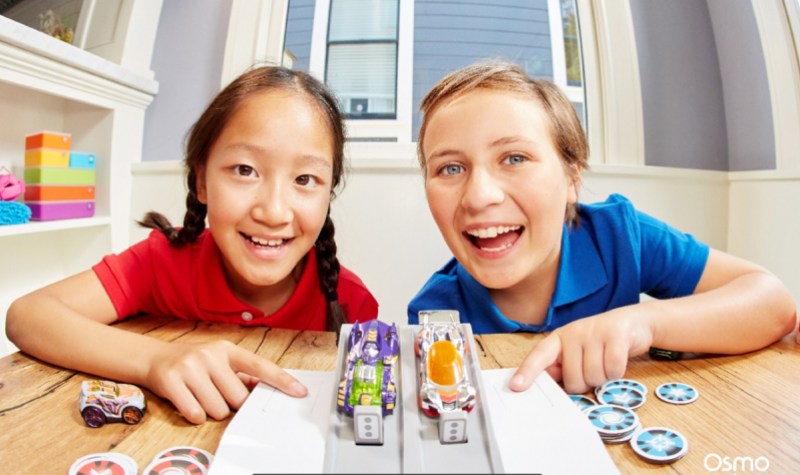 Above: Osmo Hot Wheels is for both boys and girls.

The players each pick one of six Hot Wheels cars and put them on the tracks of the launcher. When a timer counts down, each players pushes down on a button, releasing the cars, which roll down the tracks into a couple of holes.

From there, the race switches to the digital screen of the iPad, where you can see two Hot Wheels cars racing side by side on a split screen. Each player has a bunch of cardboard discs. They can throw them down in the area in front of the iPad camera. The iPad uses the camera’s computer vision to recognize the disc, and then it makes something happen in the game. The recognition is speedy, based on a live demo that I saw. The latency, or interaction delay, between throwing down a disc and having it recognized in the game is pretty short. 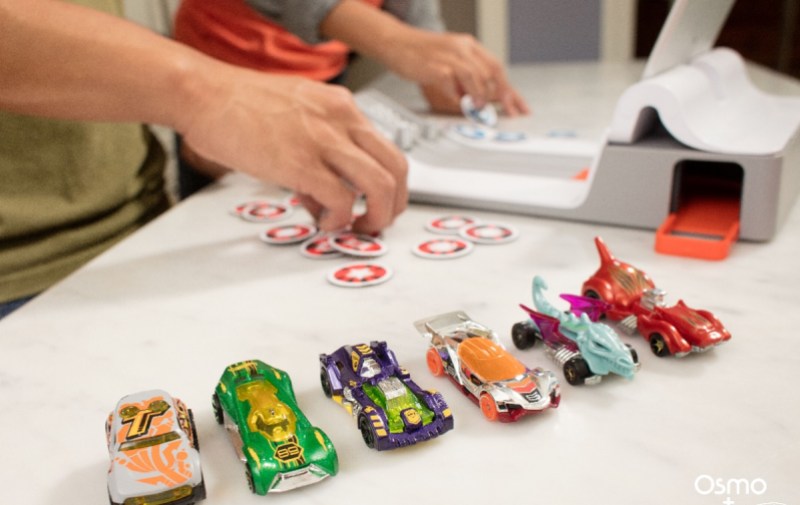 For instance, a player can throw down a boost disc, and the car will go faster. You can also throw something that impedes the other car. By the end of the 90-second race, there are dozens of discs in front of the iPad, and Osmo’s vision software recognizes them all. (There are 32 discs in all, and Osmo’s vision-based artificial intelligence can recognize the images on all of them.)

“It’s a lot like Mario Kart, in terms of how you have to think about the competition,” Sharma said. “We consider it a learning game because it is dynamic. You have to look at what your competition is doing and react to it dynamically. It’s your mind and racing coming together.”

The game has eight different worlds where you can race in competitive or cooperative modes. You can also do single-player challenges.

Sharma said the game was Osmo’s biggest project yet.

Osmo used the same system in previous games like Osmo Pizza Co., where kids learn how to run a pizza shop and develop entrepreneurial skills. It has used physical, interactive play to teach kids how to code with Coding and to spark creativity with Masterpiece and Monster. The company’s first product was recognized as one of Time Magazine’s 25 Best Inventions of 2014, and it continues to be a favorite of teachers, parents, and kids alike. All told, Osmo has published 10 games. 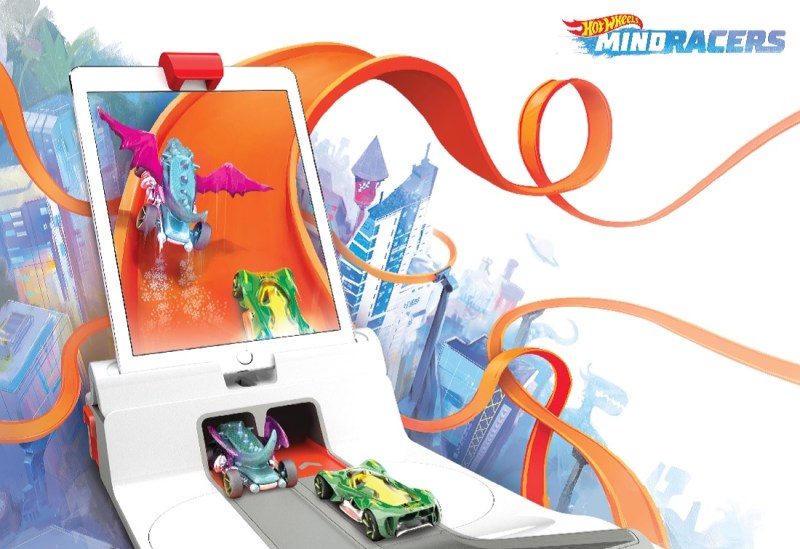 Former Googlers Sharma and Jerome Scholler started Osmo in 2013. The company has 65 employees. Over time, the company shifted its focus for its AR technology from adults to kids. Osmo has raised $38.5 million to date. Sharma said the company is also working with Sesame Street on a separate project.

I grew up with Hot Wheels, so it holds a special place in my heart. Sharma said the team designed the experience for both boys and girls even though Hot Wheels has historically been viewed as a boy’s brand. MindRacers is targeted at ages 7 and up. It sells as an add-on for those who have existing Osmo kits for $59, and the full kit with the Osmo iPad base costs $79.