Math isn’t fun. Ask any kid. But Osmo, the company that creates cool iPad apps that interact with physical objects, hopes to change that with Osmo Numbers.

The title is the latest in a serious of iPad educational games that the Palo Alto, Calif.-based startup has created in an effort to reinvent how children learn. Osmo’s past titles — which teach kids how to read, draw, or manipulate shapes — are already being used in more than 4,000 schools around the country and 100,000 homes around the world because they make learning fun, said Pramod Sharma, the chief executive of Osmo, in an interview with GamesBeat.

“We want to take games into an area where they have a very positive impact,” said Sharma. “It’s an area that can help you become more creative. The whole idea came because, when I talk with my daughter, she never says she really wants to do math. Math has not changed for a very long time. The bar for falling in love with math is very high.”

I’ve seen a demo of the game, and once again, Osmo has built something wonderfully creative and interactive. Back in March, the Silicon Valley startup came up with Osmo Masterpiece, an app that enables kids and adults to become digital artists and regain confidence in their ability to draw. One big endorsement: Osmo is announcing today that educational company Houghton Mifflin Harcourt (HMH) is going to be Osmo’s first educational partner. This partnership will bring HMH’s learning content — such as block numbers that are already being used in classrooms — so that it works with the Osmo platform. 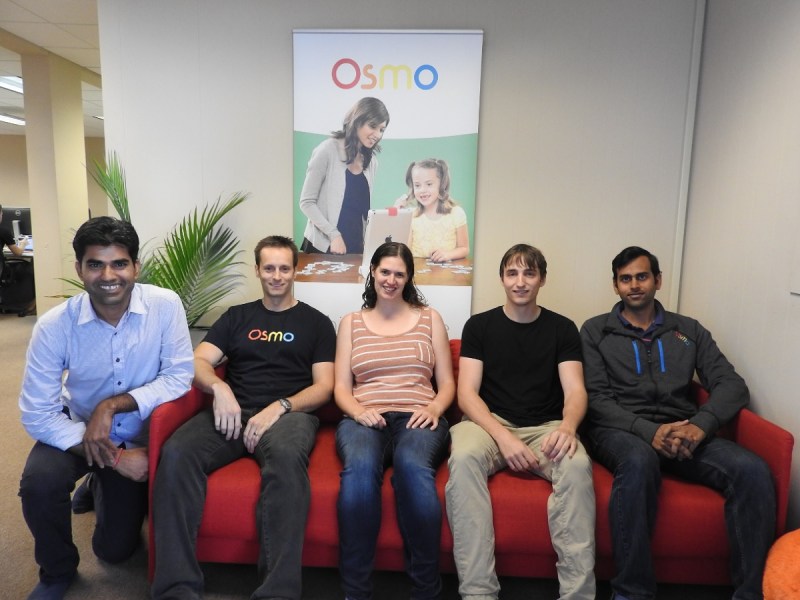 Above: The Osmo Numbers team, with CEO Pramod Sharma on the far left.

Osmo Numbers works much like the previous apps. You attach Osmo’s reflective mirror to the iPad and activate an app that taps into Osmo’s artificial intelligence technology. The app uses computer vision to analyze the scene and see the blocks that you place in front of it.

The app has a colorful aquatic theme. A bunch of bubbles float down from the top with numbers inside them. Your kid has to look at the number and toss out a series of numbers that can be used to add up to the sum that is in the bubble. Your goal is to pop the bubbles so the fish captured inside them can fall back into the ocean.

You can solve that problem multiple ways. If you place two numbers down separately, the app automatically recognizes their values and adds them together. Then it offers a response about whether your answer is correct or not. You can place additional numbers, or you can put two numbers side by side, touching each other, if you want to multiply them together. The app recognizes the multiplication in real-time. If you make a mistake, you can quickly correct it and the app adjusts the results. This encourages freestyle thinking, Sharma said.

This isn’t at all like a boring work sheet, which is the app’s primary competition at schools.

“Numbers are inherently very playful,” Sharma said. “How do you multiply numbers together multiple times and get at a very large number? We really thought we could bring out the playfulness of numbers. It’s not like a work sheet. We explore the process by which you build muscle memory. My math muscles are strong and I can do things faster because I have a deeper understanding. If I am looking at a number like 37, I can say it comes from 10 + 10 + 10 + 7.” 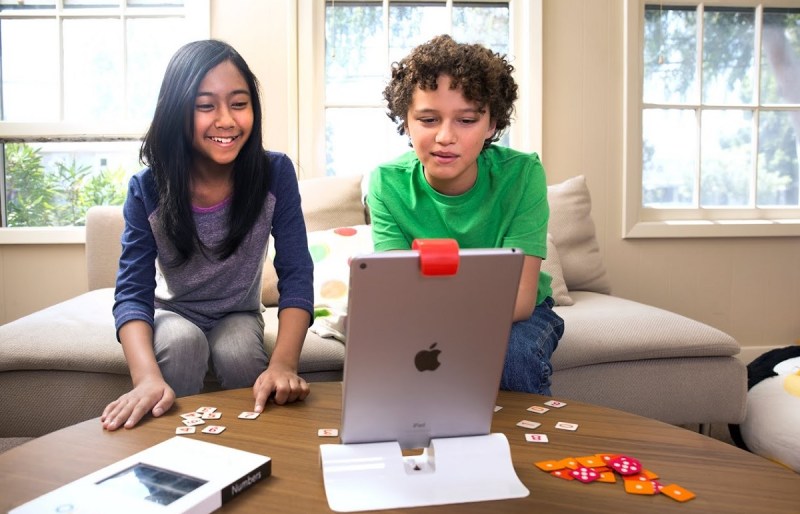 Above: Osmo Numbers aims to get kids excited about math.

The game targets kids in elementary school, or roughly preschool through sixth grade.

“It’s very intuitive, but it doesn’t feel like you are doing math,” Sharma said. “You don’t have to think about it.”

While the game looks simple, Sharma said the team has agonized over making math fun for a while. Osmo Numbers is actually the eighth version of a math game that the company has prototyped. One of those was a battle game where two armies attacked each other. You won if your numbers were bigger than the enemy’s.

“We found that game was better played with a touchscreen, rather than using our camera system and the Osmo platform,” Sharma said. “It wasn’t like it was absolutely fun.”

The team isn’t your typical crew of game developers. Sharma came from Google, and others come from education or tech companies. And they’re working on a problem that is really important.

According to the National Assessment of Educational Progress, only 26 percent of U.S. high-school students are proficient in math, which is well behind other nations. Math is a fundamental skill and an important building block for the future of kids development. 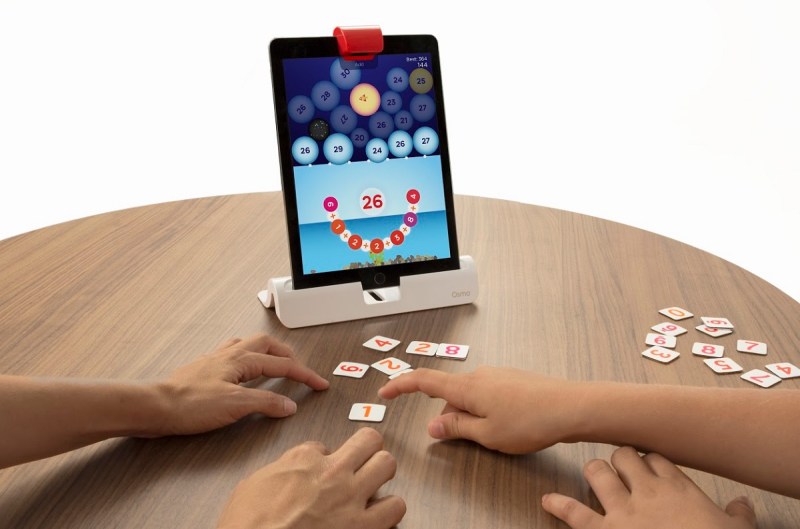 “Pramod and I both have daughters and we tried everything to find an engaging fun math experience for them – from worksheets to apps to puzzles, but they always lost interest or were discouraged – so we sought to create a new approach,” said Jerome Scholler, cofounder of Osmo, in a statement. “We quickly realized that the flaw was ingrained in the system, instead of trying to gamify a math worksheet, we had to – in a sense – mathify a game. Finally, even our own daughters can admit to loving math, or at least loving Osmo Numbers.”

The Osmo Numbers core features include Math Sense, which promotes a trial-and-error approach that helps kids grasp math concepts through fast experimentation rather than rote memorization; Collaboration, or working together with friends or classmates to problems; Confidence, or taking away intimidating math problems and letting players progress as they meet challenges; and Progression, or moving on from counting dots to multiplication.