Osmo is a small company that wants to start a “Play Movement,” or change the way that kids interact and socialize with electronic devices. Now the maker of the innovative Osmo platform for social and educational iPad games has $12 million to help do so.

The Palo Alto, Calif.-based company is announcing the first round of funding today, led by venture capital firm Accel Partners. It’s also revealing that its Osmo product will be available for purchase in Apple stores in the U.S. and Canada starting Oct. 16. Rich Wong, a partner at Accel, will join Osmo’s board of directors. The firm has invested in companies such as superstar mobile publisher Supercell (Clash of Clans), Rovio (Angry Birds), AdMob, and Facebook.

“We have a really solid product, and now it’s time for us to grow,” said Osmo chief executive Pramod Sharma in an interview with GamesBeat. “We are set to scale the product, and I expect us to grow significantly.” 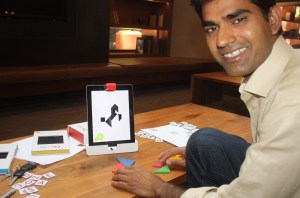 Above: Pramod Sharma of Osmo

The deal comes on the news that Osmo (previously known as Tangible Play) had, as of Sept. 18, generated more than $2 million in preorders for its game. The Osmo hardware and software platform is sophisticated yet remarkably simple to understand and use. You set an iPad in a vertical stand and then attach a small mirror in front of the tablet’s camera so that the lens uses the mirror’s reflective capability to see downward. You can then play games where the camera recognizes small objects that you put in front of the iPad. In the case of Osmo Words, one of the downloadable apps, the camera recognizes blue or red letters tossed in front of it.

On the iPad screen, you may see an image of a bear. You can toss out letters quickly to spell out B-E-A-R. But you may get it wrong as the word may have only three letters and it may really refer to the C-U-B behind the big bear. If you guess wrong, Osmo will record that as a strike. If you guess right, the correct letter will appear on the screen. The games are creative, educational, and social. So you can see why parents and teachers would like them. They’re also novel enough to be fun, and that’s what kids may like.

Osmo targeted teachers and kids with its product demos. And it wound up shipping its first units to more than 2,000 schools.

“People really liked the idea of using the iPad for education,” Sharma said. “Apple also really loved it. The word of mouth is very strong.”

The funding is a lot of money for a company with 13 employees. Sharma said Osmo will expand its operations and explore putting the game on other platforms in the future.

Other investors participating in the funding round include Upfront Ventures and K9 Ventures. Sharma and Jerome Scholler founded Osmo in 2013. They built the company around a technology it calls “reflective artificial intelligence,” or recognizing objects that appear in a tablet’s camera view.

“A year ago Jerome and I were still 3D printing Osmo in my garage, iterating on jagged prototypes. Now our product has reached a point where it will be sharing shelf space with devices that have redefined or built whole new markets like the iPhone, iPad, and the Mac,” said Sharma. “It’s an incredible moment for our company and with our new round of funding and another great investor we can continue to push ourselves to make Osmo even better as we redefine the way kids play.”

“Osmo’s technology makes childhood education more personal, creative and engaging. We believe that the future of education will rely on intuitive innovation that amplifies learning through interactive online-to-offline experiences — Osmo is at the forefront of this movement,” said Wong in a statement. “Osmo is a natural fit for parents and teachers because it adds a small but powerful layer of technology on top of a platform, the iPad, that children already know and love.”

Osmo will also be demoed and sold in Marbles Toy Stores around the U.S. Sharma said that the company is evaluating whether to do an Android version, but for now the company is focusing on mastering the Apple platform.