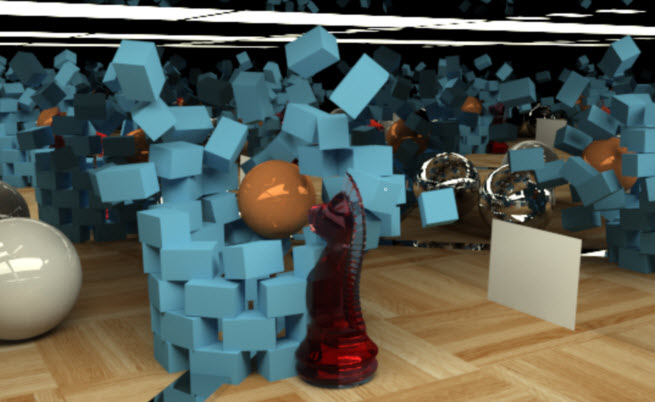 In an exclusive interview, Otoy chief executive Jules Urbach said that this move is a big step towards the company’s goal of enabling developers to create next-generation video games and animated films that take advantage of cloud rendering technology. In this model, the computing happens in a web-connected data center, or cloud, that is primed for doing graphics processing — not in the user’s own machine. These technologies could turn the world of digital animation upside down, said Urbach, by making it much easier to render high-end animations like the one pictured above (which was created by Otoy developer Sam Lapere). That, in turn, could make it cheaper and easier to make high-end digital films and games.

“We think this will be disruptive for film and game animation,” Urbach said.

Otoy’s team has created cloud-based animation tools that can create hyper-realistic imagery. They will put this technology in the hands of people who could otherwise never afford such special effects. These technologies can be used to create imagery that accurately creates lighting in an animated scene without requiring a huge amount of supercomputing power or programming know-how.

With Otoy’s tools, artists creating films or movies can now reduce a lot of their computing costs and save a lot of time by shifting to tools and computing power in Otoy’s cloud. Artists can tap the cloud to render their imagery and will never have to upgrade their hardware or download the latest creativity software again. Consumers will be able to see this kind of content in the future via just about any device through game or video streaming, where the computing is done in the cloud and images are piped over the network to the user’s computer, iPhone, iPad or TV.

Refractive Software is working on a technology called Octane, which is targeted at film animators. Octane is a cloud-rendering platform that works directly within Autodesk producs such as Autodesk 3DS Maya and Autodesk 3DS Max. and will make it much easier and cheaper to create animated films. Otoy is also working on Brigade, a technology to render cloud-based games with high-quality 3D graphics.

These plug-ins will change the way these animation software packages — used to create films and games — display the designs being created by artists. Without Octane, the software is slow and shows images in blueprint formats, before the animations are fully rendered. But with the Octane technology, the images are photorealistically rendered all of the time. As an artists draws or manipulates an animation, he or she can see the effect on the image in real-time. The new plug-ins will be sold alongside Octane 3D Studio Max, which was released last month for $99.

“In going from a blueprint to a photograph, the productivity gain is huge,” Urbach said. “You used to have to hit the render button to see the image. Now you don’t. It is there in real-time with perfect lighting.”

Brigade, on the other hand, enables next-generation technology, dubbed raytracing, at 60 frames per second on commodity graphics chips. Jeroen van Schijindel, who developed the Brigade engine with Jacco Bikker, is now working at Otoy with Otoy’s Rob Wyatt on the Brigade technology.

Brigade 2.0 has rolled out to third-party developers and it runs twice as fast, enabling 60 frames per second gameplay for raytraced games on a single graphics chip. Brigade will work with the art pipelines of all major art tools. And it works with both Advanced Micro Devices and Nvidia chips.

Rivals in online games include OnLive and Gaikai, but Otoy is using the same kind of technology for a very different kind of purpose. Once it seeds its technology among game developers, those developers will be able to write their games to the Otoy game cloud, and the high-end games will be able to run on any device.

With the Refractive deal, Otoy will now have 40 employees, including a number in New Zealand where Refractive is based. Autodesk has invested an undisclosed amount in Otoy.