Otoy announced today that it has created a new technology that will lead to cool virtual reality experiences. It’s a big step in turning virtual reality into a new medium for experiencing illusions of reality.

The Los Angeles company announced that it has created camera that can capture spherical light field of a real-world environment that designers can use in an accurate, navigable scene in virtual reality. That means it can use a camera to capture a 360-degree view of a scene and then turn that into a virtual world landscape where you can walk around and view it using 3D VR goggles.

Otoy says the tech is an important step in creating VR experiences for authentic travel, tourism, sports, and entertainment applications. You’ll be able to visit places in virtual reality that look exactly like they do in real life, said Paul Debevec, Otoy’s chief scientific consultant, at the FMX 2015 event in Stuttgart, Germany. 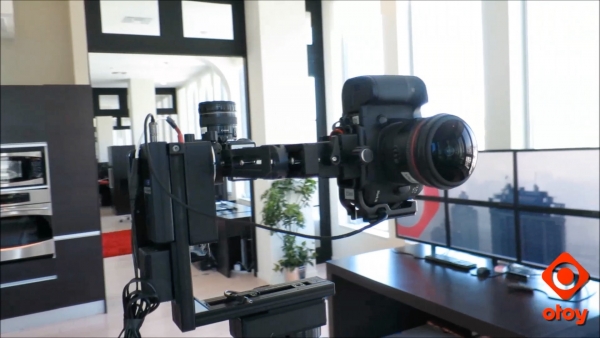 With the new tech, you’ll be able to walk around a virtual environment, rather than just look around. Debevec demonstrated the process used to capture the light field of a room using a prototype camera array.

Otoy said the light field data of the room was rendered instantaneously in VR, mirroring the reality and grit of the natural world, while allowing a user in that world to look in any direction and move around in the space as if they were actually there.

“Imagine being able to step inside of the Great Pyramid or visit the Great Wall of China all from your own home with a completely accurate virtual recreation that was captured from the real thing,” said Jules Urbach, the founder and CEO of Otoy. “Today’s demonstration of the first ever light field capture of a real world environment will enable experiences just like that, and many more as the technology evolves. Just as light field capture of people was a tremendous milestone that advanced film and entertainment, we feel that today’s breakthrough will be equally as significant for the medium of VR and the experiences that are enabled by it.”