When you stick with making a game for six years, it has to be a passion project. And that’s what Outer Wilds is for Alex Beachum, the creative lead who started the PC game as a student project, formed a studio in Los Angeles Mobius Digital, and then teamed up with Annapurna Interactive to bring it home. It’s coming out this year, and I got a good look at the near-finished product.

The Outer Worlds comes from a concept that big publisher like Activision would never approve. It’s like NASA meets camping, Beachum said in an interview with GamesBeat. It’s an open-world mystery in which you explore a solar system trapped in an endless time loop at the end of the universe. I asked Beachum if it was “Firewatch in space,” and he laughed. The art on the planet is styled like a “national park poster.”

Outer Worlds rewards your curiosity. You start out in a distant solar system, and it has a combination of cartoony graphics and sophisticated physics. Those physics drive a fully dynamic environment, where you have to learn how to maneuver your spaceship and uncover a mystery related to an ancient alien race.

The planets of Outer Wilds are packed with hidden locations that change with the passage of time. Players can visit an underground city before it’s swallowed by sand, or explore the surface of a planet as it crumbles beneath their feet. They also have access to a variety of unique gadgets that help them probe their surroundings, track down mysterious signals, decipher ancient alien writing, and roast the perfect marshmallow. And oh, yeah, you get about 20 minutes to explore the whole solar system. 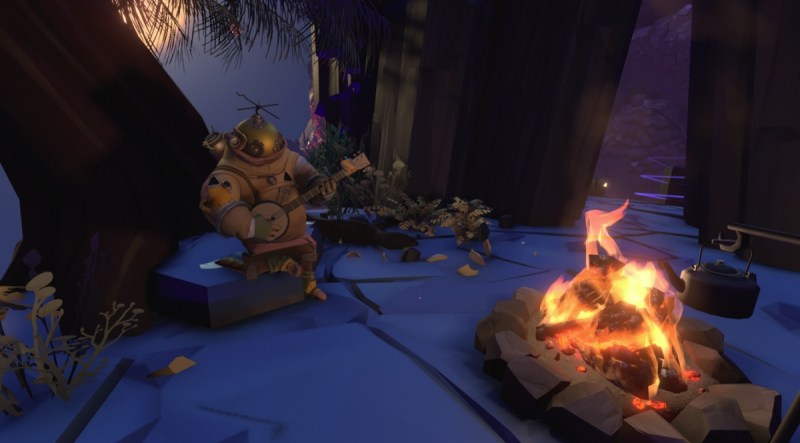 Above: Outer Wilds is like camping in outer space.

You wake up by a campfire under the stars. You are an alien called a Hearthean. You wander around and find a company, Outer Wilds Ventures, which is like a backwoods version of NASA. You find a model rocket ship and you can practice flying it. That helps prepare you for flying around the solar system. The flight mechanics are fairly realistic.

You find something called a signal scope, and you can use it to find kids who are playing hide-and-seek. It picks up audio and radio signals when you point it in a direction. You can also use it in space to find out what’s on some of the nearby planets. It’s a tool that you’ll use a lot as you explore.

You are instructed to get some launch codes for your real rocket ship, and you have to make your way through the woods to an observatory.

There, you find artifacts from an ancient alien race called the Nomai. You can inspect those artifacts, but you won’t find any real answers at first. You wonder what happened to the Nomai. As you explore, the ambient music makes you feel a sense of wonder.

Once you get into your ship, you could fly around the solar system for a while. Each planet is only about hundreds of meters in diameter, and they’re reminiscent of Super Mario Galaxy’s planets. It’s a pretty small solar system, “but there’s a deceptive amount in it,” Beachum said.

There’s no combat. Yes, this is not Star Wars.

“You can die in a lot of ways, but you can’t kill anything,” Beachum said. 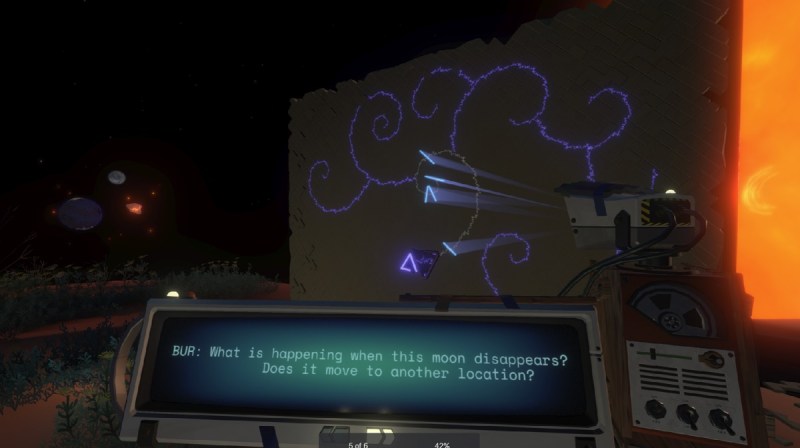 Above: Outer Wilds asks you to solve mysteries.

The gravity in the game is real. I saw a ball that was on a flat surface. It moved. Beachum explained that the planet has a moon, and it has a gravitational pull that affects the planet.

You can pick up things like gravity crystals, which let you walk on walls. You find puzzles and solve them, moving close to your goal of unraveling the mystery.

The space flight is also realistic. You can fly on autopilot, or you can do it more manually. If you land too hard on a planet, you can damage your space ship. You can repair that damage, but if you go outside without putting on your space suit first, you’ll die. You also have to be careful not to fly into the sun.

You can tour both space and a planet with low gravity using a jetpack. You can get new oxygen for your tank if you find some trees on a planet. Some of the worlds are challenging to visit, like an ocean world that is beset with tornadoes. When I was playing, I got killed by an island that landed on top of us.

At some point, when you have explored enough, things start to make sense. 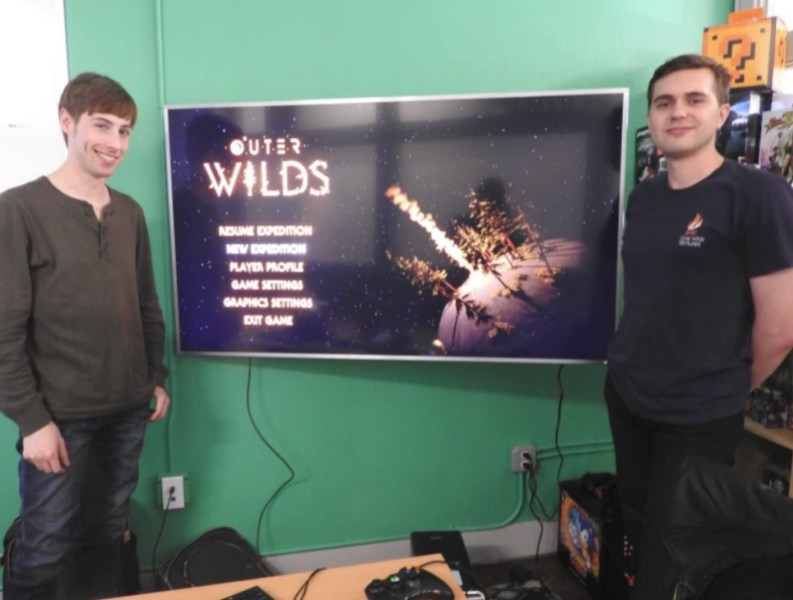 The story about how the game got made is almost as interesting as the game narrative. Beachum conceived of the idea as a student at the University of Southern California. It was his thesis for his grad studies in interactive media, and it had a number of students, including Verneau, assigned to help turn it into a working prototype.

He worked on it for three years and won the Seamus McNally Grand Prize and Excellence in Design awards at the 2015 Independent Games Festival. He joined Los Angeles-based studio Mobius Digital to turn the project into a real game. The company raised $126,000 through a crowdfunding campaign with Fig.

But that wasn’t enough. The team received funding from Annapurna Interactive, the publisher behind the critically acclaimed titles What Remains of Edith Finch, Gorogoa, and Florence. 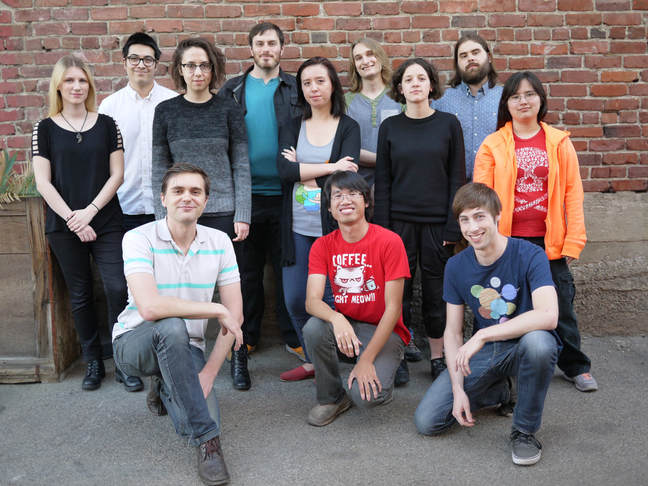 Above: The Outer Wilds team

Annapurna Interactive is a division of Annapurna Pictures, the entertainment studio behind the films Zero Dark Thirty, Her, and Sausage Party, dedicated to producing and publishing games. Annapurna will publish the game this year. With that money, the team was able to grow to about 14 people.

“We wanted to finish the game we intended to do,” said Verneau. “It’s about satisfying people’s curiosity. without compromising it. Annapurna was really supportive. It was great to have the resources to finish the game and keeping it the way we wanted it to be.”

He added, “It embodies the spirit of space exploration. It’s not conquering new territory. It’s learning about the physical world.”

When’s it going to be done? Soon. It won’t take another six years.