Move over, Angry Birds. Outfit7 is announcing today that its Talking Friends apps have been downloaded more than 100 million times after just ten months in the Apple App Store.

That’s a big achievement that has been matched only by a handful of developers, and it means that Outfit7 will likely be able chart its own destiny as a developer of mobile apps and games. By comparison, it took Rovio‘s immensely popular Angry Birds about 18 months to hit 100 million downloads and it took Firefox a little less than a year to hit 100 million. Back January, the Talking Friends series was only at 60 million downloads.

Talking Friends such as Talking Tom Cat are cute apps where users say something into the microphone of their iPhones and the cartoon character repeats it in a funny voice. You can pet the character, poke, punch, or grab its tail. Altogether, Palo Alto, Calif.-based Outfit7 has launched ten talking animal apps.

Like the rival Angry Birds, Talking Friends has hit the level of a cultural phenomenon, making appearances on The Today Show and ABC’s hit sitcom Modern Family.

The app was created by a researcher in Slovenia as a way to use a person’s voice as a user interface on a mobile phone. Outfit7 grew up around it and focused on creating lovable characters that could create an emotional connection to users, Nabergoj said.

“It has taken off far faster than we thought,” Nabergoj (pictured) said. “As far as we can tell, no one else has grown as fast as we have in just ten months.”

The app isn’t strictly a game. But Nabergoj said the company will expand the franchise and create game-like experiences around the characters in the future. It could also extend the characters to other media, including books, comics, and other educational and entertainment applications. 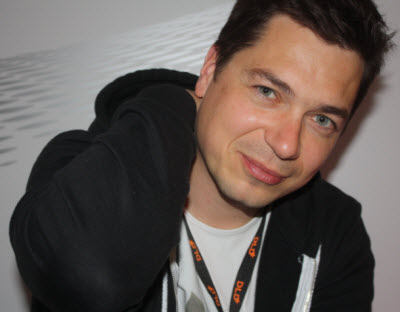 “We want to move them beyond the mobile screen,” Nabergoj said. “We don’t want this to be a fad. That’s why we have a different perspective, offering characters that people can engage with in a social context. Our goal is to be like Viacom or Disney, taking the characters to new platforms.”

Those are big words, considering the company is so small still. The company has 25 employees and is self-funded. But you have to credit them for ambition, and people with big numbers can talk big.

Nabergoj said Outfit7 is profitable and is expanding. One of the new characters coming up is Talking Ben the dog, with a very different personality from Tom, Nabergoj said.

Nabergoj said it took only 15 days for Talking Tom Cat to hit 1 million users. With Gina the Giraffe, it happened in four days. The goal for Talking Ben is to get there is two days, Nabergoj said. At this point, the apps are being downloaded 15 million times a month.

The repeat hits show that the first hit wasn’t just a fluke, Nabergoj said. For now, Outfit7 is focused just on the Apple iOS (iPhone, iPad, iPod Touch) platform. Nabergoj said the company doesn’t want to be distracted by the process of raising venture capital now.