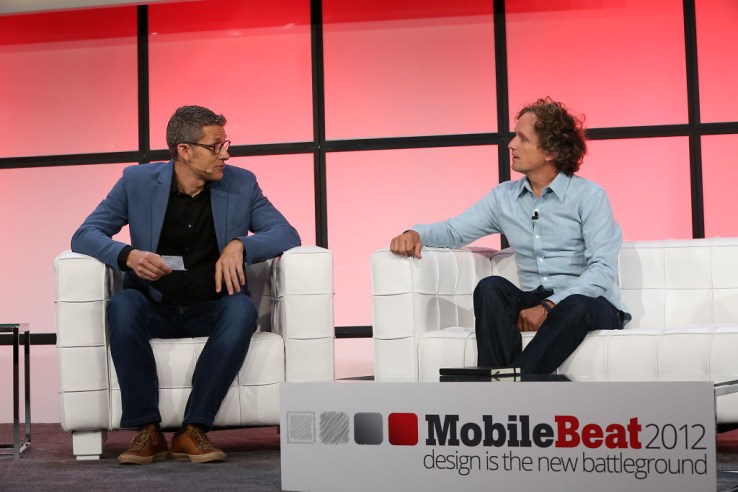 While established publishers and console developers toss around buzzwords and fret about the future of the industry, noted designer Yves Béhar believes that gamers are ready for a change in the status quo that has reigned for more than 30 years.

And if anyone can change the status quo, it’s Béhar, who has shaken up everything from laptops to speakers over the past six years.

Béhar (pictured right) wants to push these changes with Ouya, the new console his studio Fuseproject is helping to design. Ouya has raised more than $3 million on Kickstarter since going live Tuesday. The project actually hit that milestone during his interview with VentureBeat, right after his appearance onstage at MobileBeat 2012. (He was eagerly checking the Kickstarter total via his iPhone backstage.) Gamers have embraced what they hope will be a game-changer — a completely open console built upon Android that costs a mere $99.

Béhar was approached only three months ago by the team lead by Ouya founder Julie Uhrman to work on the project. He was immediately impressed. “I saw the energy. I saw the passion. I saw the credentials,” he said.

Fuseproject quickly jumped into what Béhar termed a “partnership,” in turn giving the studio a major share of both the risks and the incentives. For his part, Béhar believes the time is ripe to jump into the established industry, with a small company like Ouya’s only advantage being that it’s a “180 degree turn” from established trends.

So far, so good. The console has received overwhelming support, which Béhar believes is a reaction to the “frustration” that both fans and developers feel toward the limitations of existing consoles. “In a world where makers are kings, [being open] seemed like the right approach,”

Béhar gained notoriety in the tech industry in 2005 when he set out to create the $100 laptop for the One Laptop Per Child project. He sees many similarities between these projects, noting that PC development used to be entirely focused on “raw power” but has since seen the rise of netbooks and other inexpensive devices. By the same token, he said, consoles are more dependent on having great content than the latest power.

“I don’t want [the Ouya] to be a gilded, velveted salon that overpowers what gamers and creators are doing. We’re taking a counterstep to the current trends,” he said.

Building a completely open platform comes with its own set of challenges. It is a natural haven for piracy, which has bedeviled both large publishers and independent developers alike. Many of the moves by companies like Nintendo in recent years, such as region locking the Nintendo 3DS handheld console, have been in reaction to limiting such piracy.

Béhar shrugged off such concerns. “It’s like any ecosystem. You’re going to have to establish who are the players. Who is your crowd in that ecosystem? Who is going to be fair, and who isn’t?

“My sense is that we can do both. We can both have an open attitude and a stimulating platform to engage creativity.”

Béhar also welcomed the challenge of designing a console that some critics have derided as an unattainable fantasy. “I love these comments. I’m titillated and always excited to hear those comments,” he said. “Naysayers are a great source of conversation. We love to go out and prove that something can be done. That’s exactly the kind of challenge that lights our fire, so to speak.”

Nevertheless, there’s still room for what Béhar terms “editing” in the specs. There has already been a great deal of debate among some of the console’s more than 22,000 backers about what changes are needed, such as multiple specs, and more memory (the Ouya has a mere 8GB of internal Flash storage).

Béhar has followed some of the conversation threads, and he noted that there has been an “interesting debate” on what is needed versus what is ultimately superfluous: “Some of them ask, ‘Do we really need all that extra stuff?’ Someone might be asking for three USBs, but someone else might point out that it isn’t central to what we’re [trying] to do. Editing to a reasonable amount of specs is something we know how to do well, rather than just putting in the maximum amount of specs.”

Having raised more than three times their original goal (and counting), the Ouya team is also soliciting feedback on what to do with the extra money. “We’re working with the community to develop stretch goals,” Béhar said. “We want to see what the people want.”

For now, a portion of the money will go toward turning the Ouya into a production-ready model and possibly funding some initial game development. Béhar is focusing on “really delivering a high-quality product and high-quality experience,” with a particular emphasis on getting the controller right.

Contrary to other reports, the promised trackpad will also be part of the controller. “That will make it possible to play a variety of games. Something like Angry Birds,” he said.

In many ways, Ouya is exactly what publishers and investors have been pining for since the launch of the iPhone app store: a reconciliation of dynamic mobile development and traditional home consoles. In a sense, the Ouya is an especially powerful Android phone that you can plug right into a television.

As for whether larger publishers and developers will embrace the Ouya, Béhar is optimistic given the explosion of interest in the console. “I would be surprised if we didn’t get some interesting phone calls from larger developers,” he said.

Skepticism remains. Ouya will face formidable competition from established platforms like the Xbox 360. During his discussion at GamesBeat 2012, Kleiner Perkins Caufield & Byers partner Bing Gordon complained that developers don’t want to worry about yet another platform.

In a way, Béhar agrees with Gordon. “There is a need for new, more open, easier to access platform, rather than the status quo. In our case, I don’t feel like we’re splitting the developer’s attention one more time. I think we’re adding something that simply wasn’t there.”