The developers of Overwatch, Blizzard Entertainment’s team shooter launching this spring, have a lot riding on their shoulders.

The game is Blizzard’s first new game that’s not from an established franchise since World of Warcraft launched in 2004. It’s the company’s first new intellectual property in almost 18 years since StarCraft’s 1998 launch.

It’s the company’s first brand-new console game ever, and its previous forays into controller territory haven’t all ended well. Diablo III did well. But third-person stealth shooter Starcraft: Ghost was scrapped even after I, as a journalist, had played single- and multiplayer missions at Blizzard headquarters — which meant it was pretty darned far along.

And no, this doesn’t count:

So when we caught up with Overwatch assistant game director Aaron Keller and lead gameplay engineer Tim Ford recently, I asked them to tell us about the development process for Blizzard’s new game. No pressure, guys.

GamesBeat: So how did you arrive on Overwatch’s team-shooter model?

Aaron Keller: We started the project a little over two years ago. We knew we wanted to make a shooter, and we knew we wanted it to be an ability-based, hero-based shooter. It started to coalesce into something that had the razor-sharp focus that the game has right now, which is this competitive multiplayer game. That’s what we’re really excited about for Overwatch, is two teams coming together, exploring this big cast of heroes, and seeing who comes out the better team. 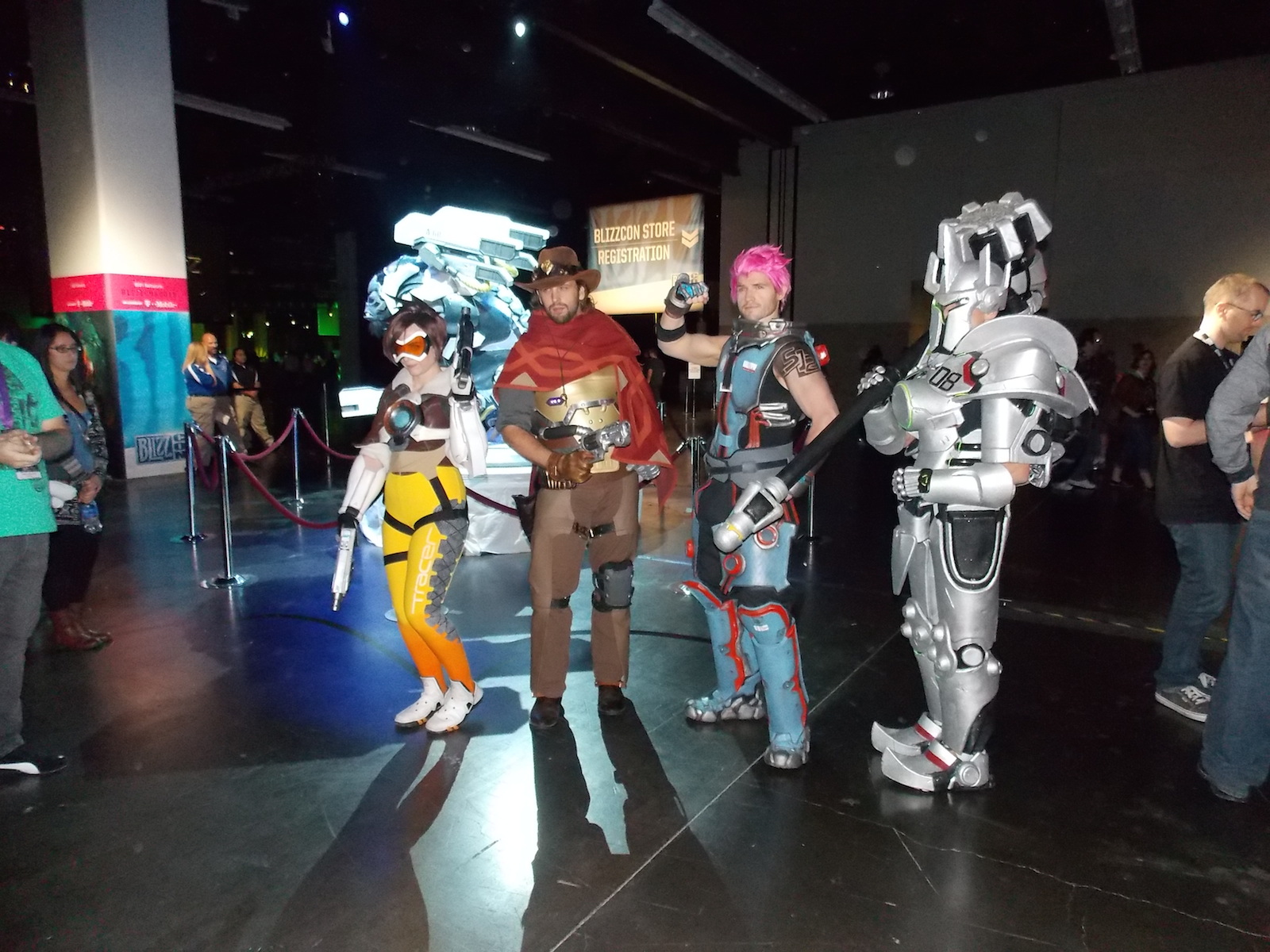 Above: Fans cosplaying as Overwatch heroes at BlizzCon this fall. From left to right: Tracer, McCree, Zarya, and Reinhardt.

GamesBeat: But offering up all the heroes at once means you can’t release or sell them later.

We have a lot of counters in the game. Winston, the big gorilla [tank], is a great counter for Widowmaker, who is the sniper. We don’t want you to go into a game as Widowmaker and feel like you can’t do anything at all because there’s a great Winston on the other team.

Once that went in, the matches started becoming really dynamic. A team would make a push, it looks like they’re just going to roll through the whole match, and suddenly the defending team switches two of the heroes, their team composition changes, and everything stops. And now they’ve got the upper hand, and now it’s up to the attacking team to figure out what they’re going to do with something like that.

I think it helps the game out a lot, it makes it more dynamic, it makes it feel like you have a lot more freedom and creativity to explore the whole roster of heroes.

GamesBeat: Are the heroes driven by design or by balance for what you see in testing gameplay?

Tim Ford: We certainly have concepts. The source of heroes is murky. It could be from concept, it could be from design. We’ll try certain abilities on a hero and if they don’t work out, we won’t jettison the ability. We just kind of put that in our inventory and put that on another hero.

Above: Bastion’s turret-like gameplay in action.

GamesBeat: Can you give an example?

Ford: At BlizzCon last year [the turret-like mech] Bastion had a different ultimate than he does now. The public has seen two of the nine ultimate abilities we’ve designed for Bastion.

Keller: That was an ongoing joke for a while, it was the “what day of the week is it….”

Ford: He had a remote mine, and you could control it. There were three different versions. Last BlizzCon, it was proximity based. We built that technology for a hero to be able to temporarily possess another entity to do something.

We cut that because it wasn’t working for Bastion. But a lot of that ability surfaced in [bomb-throwing damage dealer] Junkrat. In Junkrat’s ultimate ability, you control this tire that kind of rolls and explodes. We liked that as an idea, and we were able to recycle it into another hero. 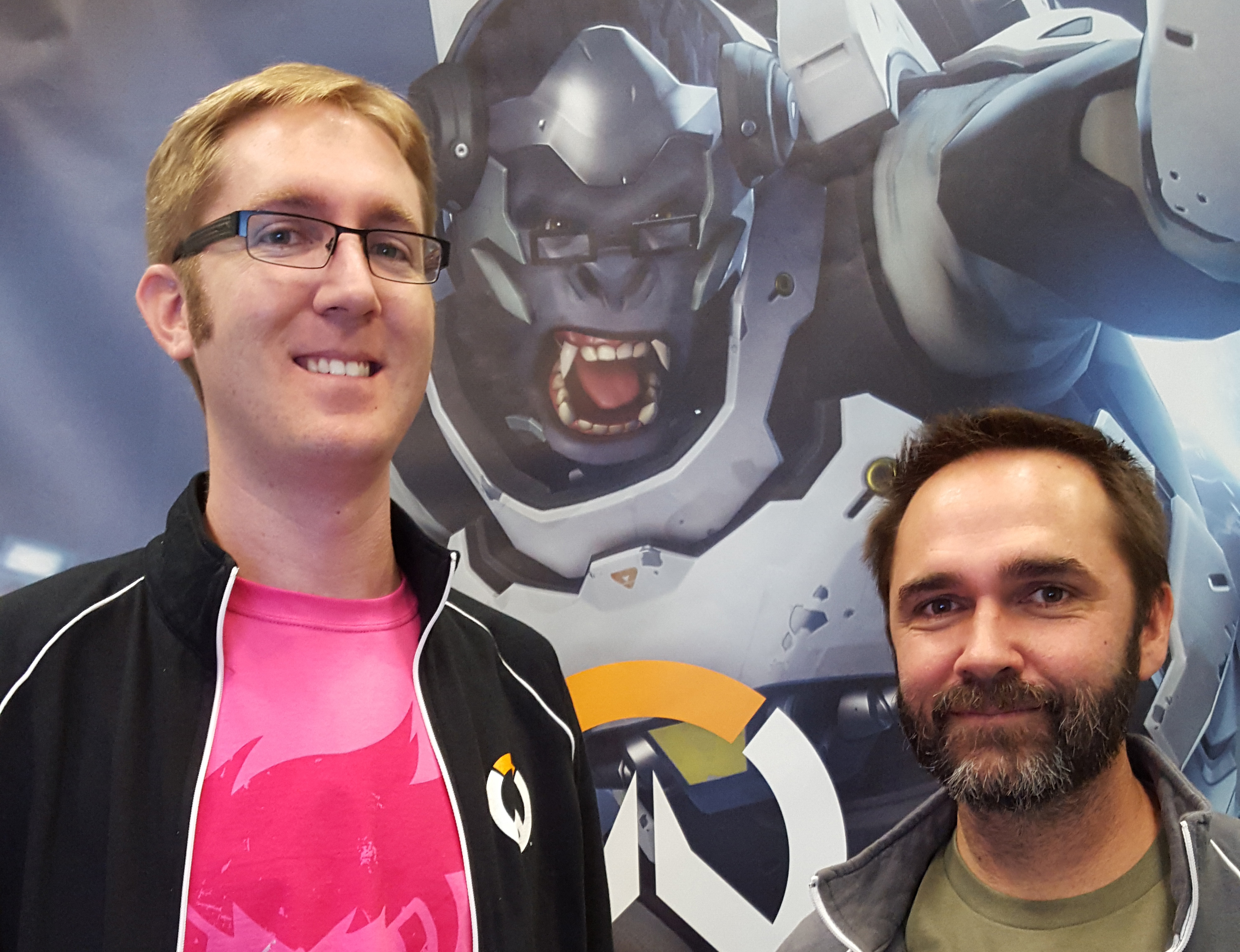 GamesBeat: Were the three new heroes announced at this BlizzCon a counter for the all-Widowmaker teams you were seeing in the closed beta test?

Ford: There’s a lot of different strategies around tanks and barriers, and I think there are enough counters to address those. We were kind of skirting the frustration line when it came to the balance around snipers. All of the three new heroes are wonderful answers to sniping.

[Frost-slinging damage dealer] Mei can put up a wall. [Ninja mech] Genji can deflect a sniper shot back at her face. [Tank mech] D.Va can use her barrier and fly directly at Widowmaker. I don’t know if it’s planned. It’s a testament to how deep the game really is. We can introduce three heroes that are wildly different that fit into the mix to balance the game out.

Once you get to a certain number of heroes, balance becomes easier, because there’s so many different game systems interacting with one another that players can be creative and feel really cool when they go to solve whatever boss fight the six enemy heroes have put up in front of them. 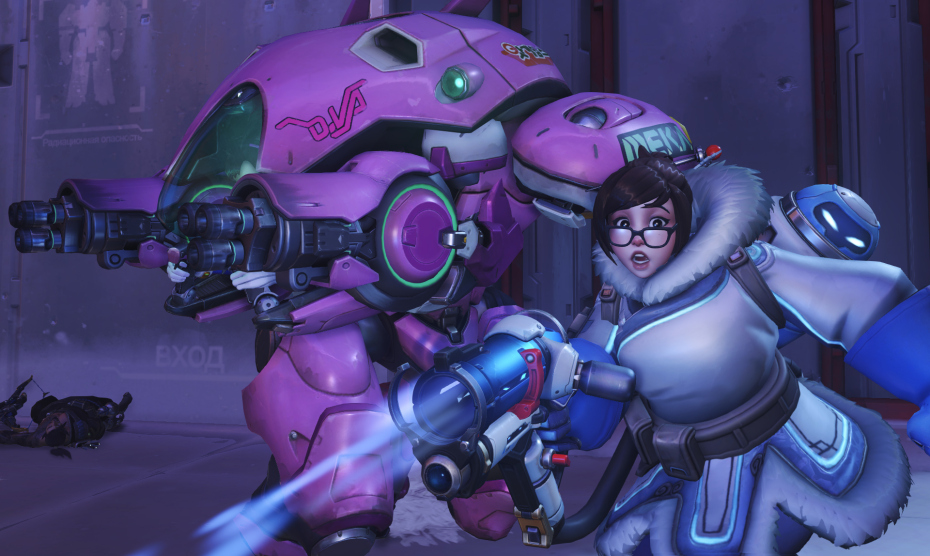 Above: Mei and D.Va make a deadly pair.

Keller: At a certain point, it comes down to, what hero do I resonate with? There might be a counter for this particular one on the other side, but that might not resonate with a particular player. Take Junkrat. There’s a lot of counters to turrets in the game, but some players really like to stand behind a wall and bounce grenades, and they feel better because they’re safe doing it.

GamesBeat: Mei’s ability to raise an ice wall can change the map. Are you looking at other hero abilities that might do the same?

Keller: The wall is so cool. There are other things that you can do with that wall. You can boost yourself and other people on your team on top of the wall, so you might notice Bastion’s in really weird spots because she’s boosted him up there.

You can also put that wall on the payload [you must defend in one mode], so you have a moving ice wall.

Ford: And on moving platforms in [the Russian factory map] Volskaya.

Keller: Having new heroes with map changing abilities is a really cool idea, but the game currently has 21 heroes, and all of them ship on launch day. We don’t have plans or know whether there’s going to be more heroes in the game. Now I really want to have some guy that does something to maps.