When the good ship Overwatch launches for PC and consoles today, it will carry with it more than just the historic fans of team shooter battles.

Blizzard’s first new franchise in 17 years hopes to broaden that base to include players who might not normally think of themselves as shooter fans: People for whom aiming on the fly doesn’t come naturally.

Never fear, developers say. If you can’t aim and fire faster than teleporting trigger woman Tracer can blink across the screen, you still have a huge number of ways to own in Overwatch. GamesBeat asked principal designers Scott Mercer and Geoff Goodman to give us some ideas for shooter-novice strategy.

Above: You do probably have to move a little faster than the tank Roadhog in this photo, who is apparently celebrating … victory.

GamesBeat: Does Overwatch have characters that you’d recommend to players who may not be into traditional online shooters? Folks that either are terrific at strategy but not as quick on the trigger, or they may be more experienced with different types of games, or they may be a few years removed … or more … from the reflexes of a 25 year old?

Geoff Goodman: It’s been a design goal for us that it’s not just like, if you don’t want to shoot, you have to play a healer. We intentionally wanted to create a lot of diversity in the roles. You don’t have to be the twitch shooter.

A character like Mercy is that healer, because we wanted to allow for that, but of course we have other characters like Reinhardt, who’s a tank. He’s not really about aiming. He’s more about putting yourself in the right position and helping your team and timing your abilities correctly. We have that direction.

We also have a character like Soldier 76. If you want to shoot people and you don’t necessarily want to be a sniper like Widowmaker, we want you to have that option as well. Soldier 76 has the auto-aim ultimate that shoots everyone for you. [Each Overwatch character has an ultimate ability, which becomes available after dealing or preventing enough damage. –Ed.]  He also has abilities like his alternate fire [option], the rocket, which is easier to hit with: It’s a big explosion. 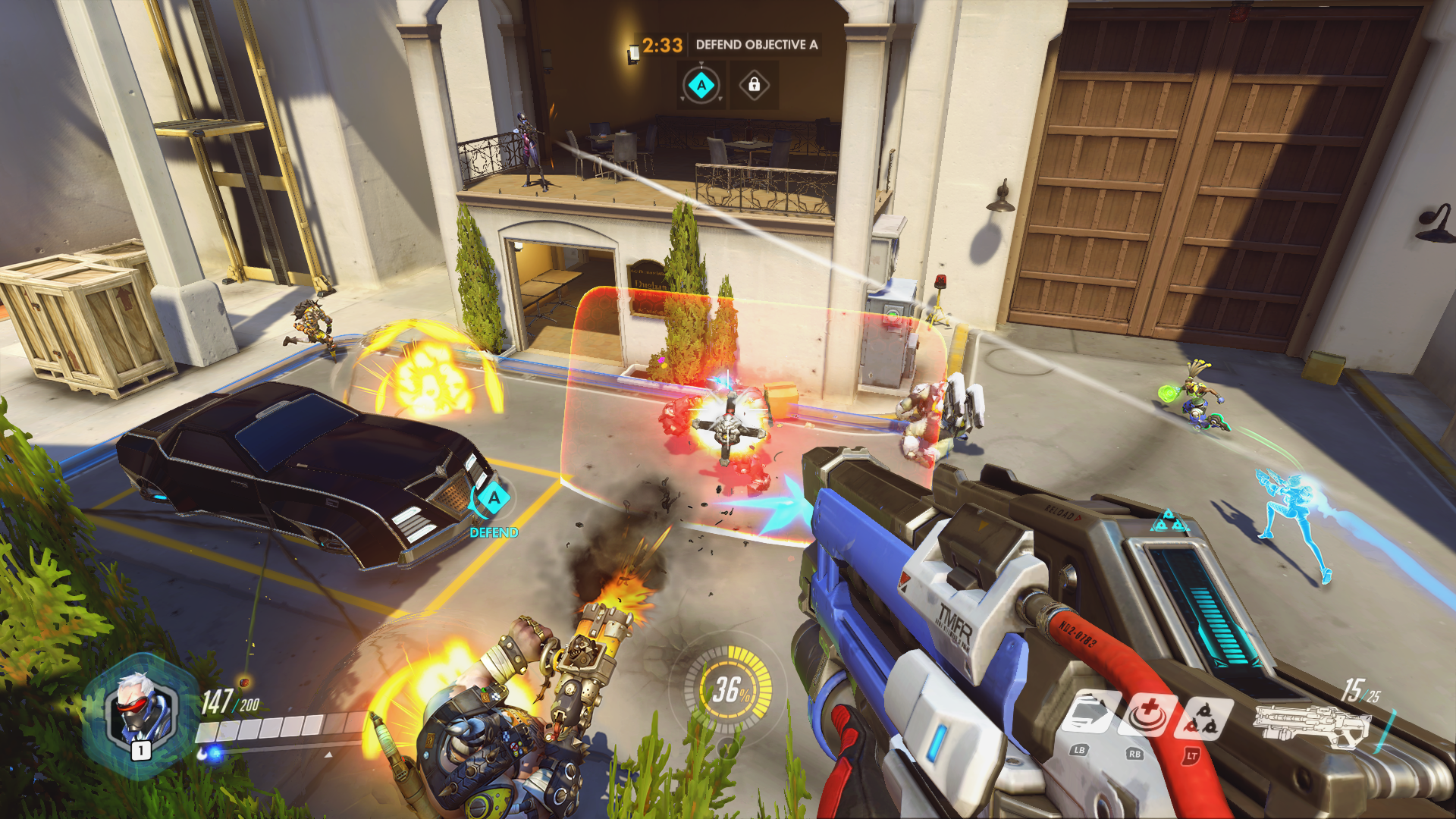 Above: The view as Soldier 76.

Scott Mercer: One of the key things I wanted was, because it’s an objective-based team game, there are lots of things you can do to create success for the team that aren’t just shooting someone. There are more characters that provide a fair amount of utility, whether it’s healing or shields or our tanks.

Just knowing that’s what actually wins the game — taking the objectives and playing the long game — will set you up for a lot of success. We have a lot of heroes that can help the team out in a lot of ways. We mentioned Reinhardt. I’ll just sit on a control point and put up a shield that protects my teammates.

We have several tanks that, if you’re stuck behind a choke [point] and your team’s having a problem pushing through, they can just go over the enemy and start taking a control point. Then the enemy has to react to you, which frees up your team to move in.

Above: Reinhardt (left), crusher of dreams.

You have a character like Mercy, who has a gun, but she doesn’t use it that much. She can heal. Her main healing and buffing and beam has a kind of lock-on. But there’s a lot to playing that character successfully.

The really good players will be moving around, trying to stay out of enemy line of sight, trying to stay alive. Especially her in particular, where with her ultimate [ability], she has to be the last one to die to get good use out of that. There’s a lot of skill and situational awareness to playing that really well. [Mercy’s ultimate resurrects her team members at full health –Ed.]

GamesBeat: Have players discovered tactics that surprised you?

Goodman: Road Hog in particular is good against Reinhardt, because his ultimate will tear down Reinhardt’s shield. You can hook [Reinhardt] if he tries to charge. You can just alternate fire right into his shield and break it down. It’s interesting that they’re discovering these tricks. If people feel like they’re locking up the metagame and it’s getting stagnant to a degree where, as a team, you can predict what the opposition is trying to do all the time, you can react to that.

We’ve had some internal tournaments, too. We have our own sort of metagame internally, which isn’t necessarily reflective of what other people are doing. Internally, we’ve seen [female tank hero] Zarya be a huge impact, and [robot sphere-thrower] Zenyatta as well. But it’s interesting, because initially those characters weren’t being played hardly at all.

Mercer: Talking about the different heroes, you have Reinhardt, who’s not very mobile; more like this big brick that sits around. But then you have these very highly mobile tanks like [female mech driver] D.Va, with her jet pack, and Winston, who can leap around. That lends itself to a lot of possibilities.

Above: Winston is a big, kindly ape, until he turns into a giant angry face-stomper.

There are characters who like to sit way in the back and protect themselves, keeping away. D.Va and Winston can close that gap super-fast. A lot of times it’s like, oh, we’ll go harass this [sniper] Widowmaker, harass this Zenyatta or Mercy in the back. There’s a lot of possibilities there.

It’s not necessarily a super-twitch thing, but you can impact a team by disrupting the opposition. Those tanks are really good at that.

Then we get into the defensive classes. You go to someone like [bomb-lobber] Junkrat.

Junkrat’s amazing. If an enemy team is coming through together, Junkrat has grenades for days. He can deal damage to a lot of enemy team members at once.

He’s also very mobile. He can place the one mine on the ground [and] leap off it. He can put himself in places that you don’t expect, which is another place where clever players can add a whole lot to the team. The ability to surprise someone by attacking from a different angle is powerful.

[Dual shotgun-wielding] Reaper is one of the best at it, because he has the ability to teleport to different spots on the map. He can use that to flank. Once he does flank, you surprise the enemy team. You suddenly appear in the middle of a bunch of players and then [use his ultimate ability] Death Blossom. GamesBeat: Are there other ways new players can use strategy to get the win?

Mercer: Just knowing, as a player, how you can move around the map without a fight, that can be really handy. Know the flanking routes. Even if you don’t have some of these crazy ability options, just knowing, hey, if I go to this room here it leads to a hallway that goes around — you don’t have to teleport to flank.

Just understanding the map is another way to be really smart in our game, having that deeper understanding. That gives you more advantages that aren’t about how well you aim.

GamesBeat: Do you have any specific examples?

Goodman: There’s a spot on Volskaya offense, on the left side. It’s kind of over the water. It’s a pretty large flank. Not all the characters can use it, but if you have teleport or multijump or a leap you can get over there. It’s hard, as a defender, to protect the main choke in the front and also keep an eye on that. A lot of Tracer players can flank using that side route.

Even if you’re not successful at sneaking around behind and killing everyone, what you see people doing a lot of the time — especially Tracers, because they’re so hard to kill — is they go around the side, flank over the water there, and then just stand on the point. The enemy’s like, wait, we have to back up and deal with that, but all these people are over in front of us at the choke, too.

Just pulling people back to you — you don’t even have to fight them. You can just leave. Then they have to decide. Do they just chase you around? Chasing Tracer around isn’t easy. There’s a lot of almost non-combat, larger strategy points that have been interesting.