Mercer: Another interesting example: Lucio has an ability that speeds up his team around him. In Nimbani, there’s a main street that leads up to the first control point when it doglegs over to the right, but there’s also a path to the left. A very coordinated team, using Lucio, they get up to that first turn, and while the defenses are set up in one direction, they go with Lucio, he hits his button, and all of a sudden the entire team is super fast moving around to the left and getting behind the control point. Then the defense has to react to that.

Above: Lucio, left, helping his team to hustle.

Goodman: Also, the defense becomes the offense, because now they’re on the point.

Mercer: We’ve totally seen that, where the offense is sitting on the control point defending it from the defense, which is really strange. Lucio’s ability to quickly move an entire team, that’s a powerful tool.

Talking about snipers, even they have a lot of team utility. That’s something I really enjoy about our game. Widowmaker’s ultimate doesn’t make her kill things faster. It’s actually a team utility because it shows where the enemies are on the map. That information is super powerful. It’s great for the entire team.

Really smart Hanzos will say, oh, we’re all looking in one direction, so I’ll put the sonic arrow in another direction to catch people that are trying to get around. There are opportunities; all the characters have some sort of team element to them. Above: The archer Hanzo, letting you know that your days of sneaking up on his team are numbered.

Goodman: [Shield-casting, turret-building] Symmetra is a character that a lot of people are drawn to that don’t necessarily have high accuracy or want to snipe people. She is really interesting to play from a meta-strategy perspective, because with the teleporter — her ultimate is to place a teleporter — it’s incredibly powerful for your team.

But [the teleporter] can also be killed pretty easily, so you have to be careful where you place it. Being able to read the game you’re in, see what the battle lines are, figure out what’s a safe teleporter spot and what’s a more aggressive one — I’ve seen entire games won instantly by a super aggressive teleporter spot that the enemy didn’t see in time. Your team floods in and they die and they’re right back where they were. It’s overwhelming.

That can be amazing if you pull that off, but you also have to be careful that you don’t just put it down and have it destroyed right away when it’s too aggressive.

Initially, it’s safer to put it a little farther back from the battle lines and get a read on how safe that is, see where people are coming from, then hopefully build up another teleporter pretty quick. If you can find a good spot for it, you can get in deep inside their base. If you place an aggressive one and let your team know it’s there, that can win the game outright by itself. It’s really amazing.

Above: Symmetra may be a support character, she can still blast people.

GamesBeat: Any other strategies to try?

Mercer: We could ramble on about more characters — like Zenyatta, how he controls the battlefield with both his healing orb and his sword orb. That’s another thing. If you’re really smart, having awareness of what’s happening, knowing who needs support …

A bunch of people ask, who should I heal? Well, heal this person, because if they live they can do the most damage. There’s a bunch of targets in front of me, which one needs to die fastest? Okay, that’s the one.

There are a bunch of constant decisions to make, and Zenyatta’s trying to stay away from everything because he’s so fragile. At the same time, he can just blow people’s heads off. He’s a very interesting character. That battlefield control style is another interesting gameplay style that Zenyatta and some of the other supports can do.

We could ramble on about different characters for a while. That’s a large part of what we’re doing during the day. Oh, did you see that play that happened last night? We’re playing at night, playtesting during the day —

Mercer: Yeah. Just absorbing all the different things that happen in our game. Oh, that was super cool. Oh, that was a little strange. Taking it all in, both good and bad, and making the appropriate changes to improve the game.

Goodman: This is something I brought up before, but we have a lot of characters we intentionally built to not require a lot of twitching. It’s definitely a design goal that these characters still have what we call a high skill ceiling, though, where you can put a lot of hours into them and get better and better. You won’t feel like, oh, I’m stuck with this role and it’s boring.

There’s so much to learn about the game that isn’t just how quickly you can flick the mouse. There’s a lot of communication, being a good commander, situational awareness, map knowledge. You mentioned recognizing an ult going off, or an ult about to go off. Why did that Reaper just race right into us? He’s probably going to ult.

A lot of that stuff goes a long way for your team. That’s definitely an explicit design goal.

Above: Even giant mech D.Va has to worry about Reaper when that ultimate Death Blossom area of effect is triggered.

GamesBeat: If you’re starting brand-new with the game, would you recommend that folks pick a particular character and try to specialize?

Mercer: A lot of that depends on how much experience you’ve had with first-person shooters before. We haven’t mentioned Soldier 76 much, but if you come more from the modern military shooter, he should feel very familiar. There’s something to that as well: “Hey, I can understand this. I have an assault rifle. I’ve got sprints. That feels familiar.”

Similarly, if you played Quake a long time ago and remember rocket launchers being a thing, we’ve got Pharah, which is intentionally very straightforward.

It’s not just a matter of simplicity. We’re trying to provide different heroes for different backgrounds and play styles and everything else. If you’ve never played a first-person shooter at all before, Mercy’s really good. Reinhardt’s pretty good. Winston is really good. He doesn’t really aim at all. He just projects lightning and punches people when he gets really angry.

Also, playing a support or tank, you can have more impact on the team as a whole. 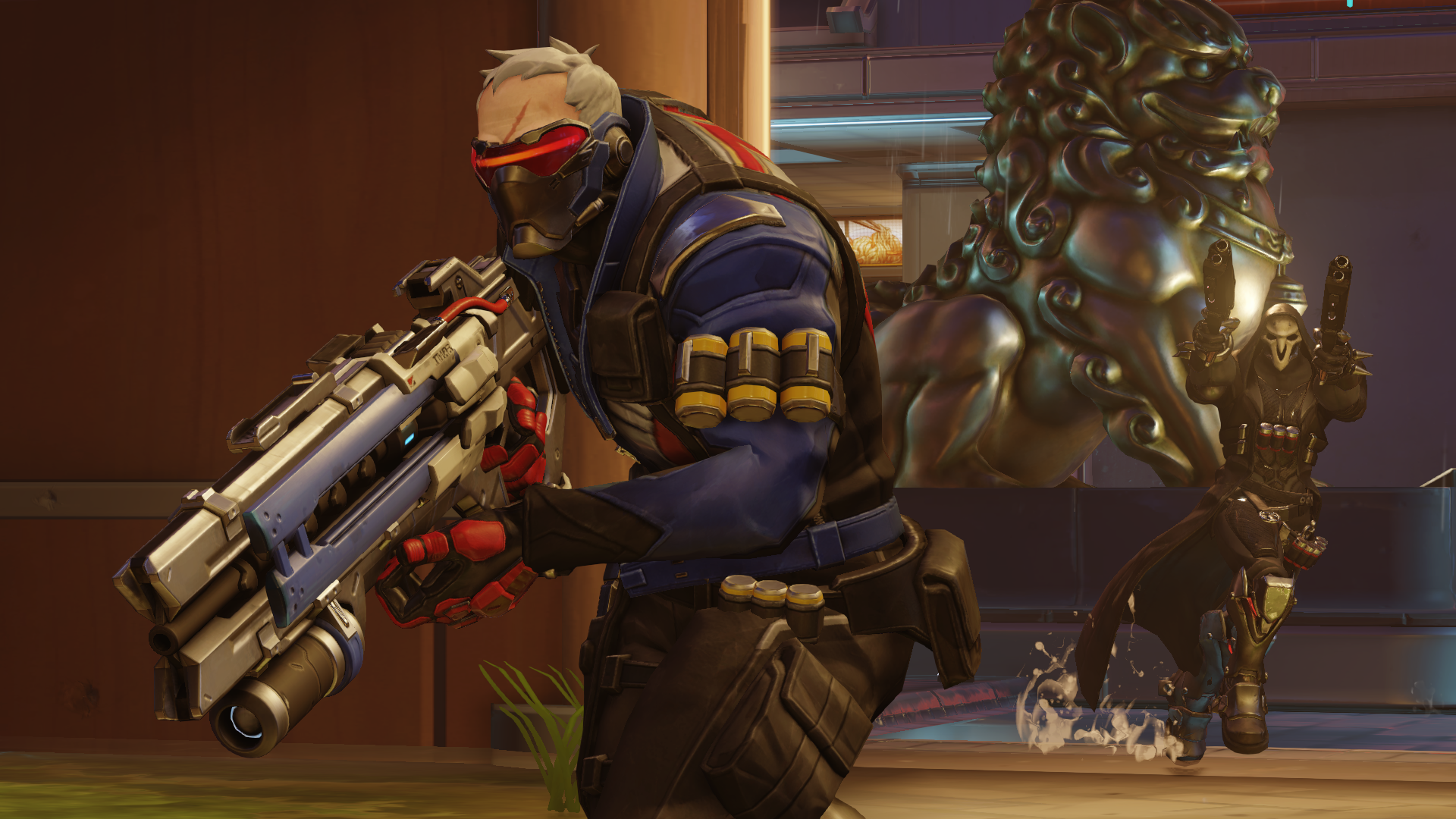 Above: Soldier 76 in action.

Goodman: The nice thing about tanks is you get to survive quite a bit longer than everybody else. You don’t just feel like you’re getting sniped really fast. It allows you to learn quicker because you have a lot more up time. Especially a character like Reinhardt, who doesn’t have a cooldown on his shield ability. He can just walk around and almost spectate as he’s helping the team.

But to your specific question, I’d say try to find a character you can enjoy playing. Maybe jump around a little bit at the beginning, but ideally try to stick to one character at the start.

There’s so much to learn from what your opponents can do. You’ll learn a lot about the characters by watching what the enemy does. It’s nice to jump around at the beginning, to find a favorite character and get an overview of what everyone can do, so you’re not surprised all the time.

It can be a lot to take in initially, but I think the tendency, and it’s a good one, is to find one character and play it for a while so you’re not trying to learn your own character, plus all the other characters, plus the maps, plus everything else all at once. Let me at least lock down my pick and figure that out.

Mercer: To be honest, even if it’s something like looking at the character lineup and thinking, oh, I like the way she looks, or that looks like a cool character—go with that!

Goodman: That’s how I pick characters. 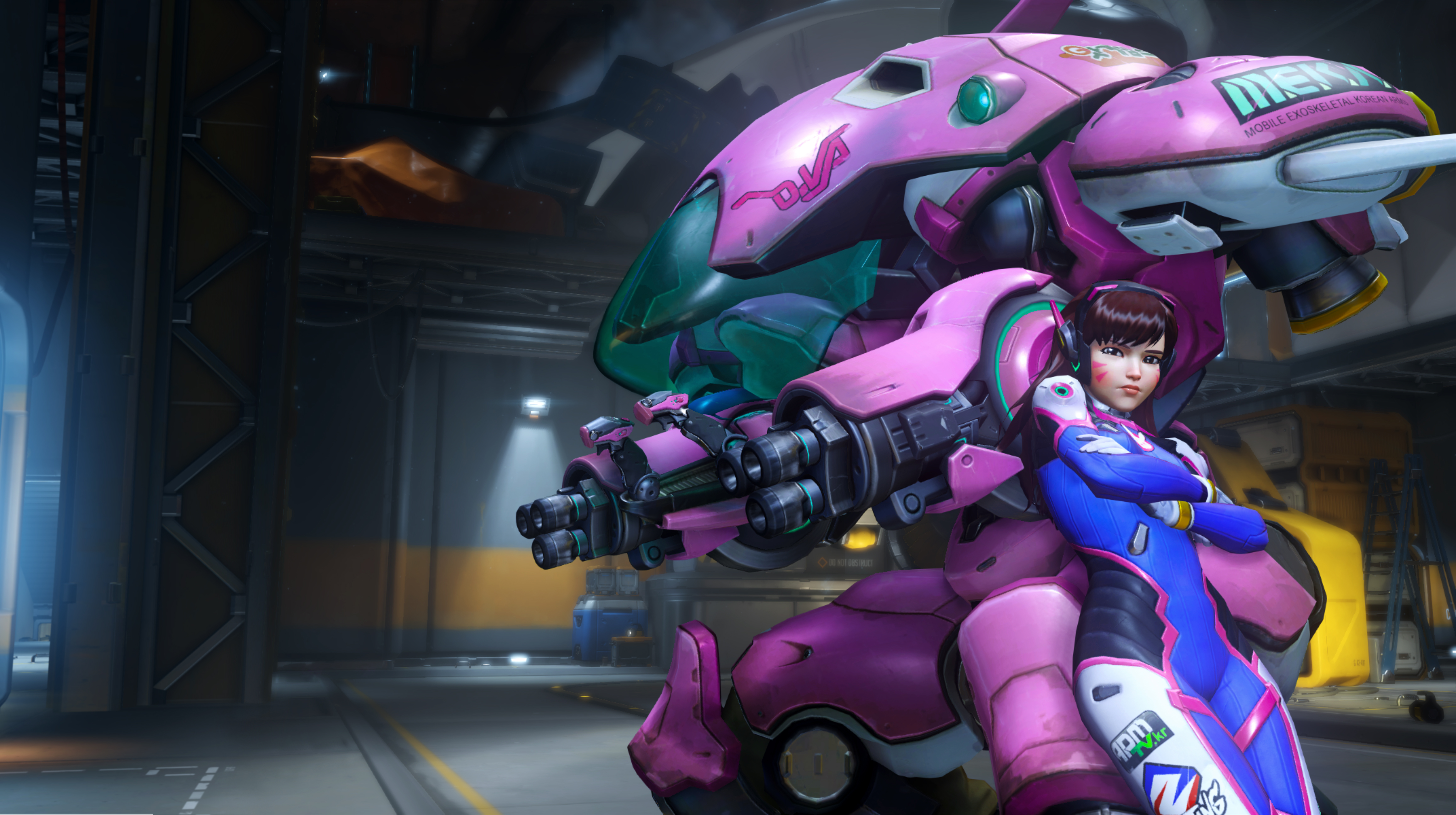 Above: D.Va in Overwatch: She’s a mech. And she’s pink. And she’ll kill you.

Mercer: There are all these elements we’ve been talking about, but a lot of times it’s just, oh, that character seems cool, and you roll with it from there. Whatever gets you excited to play the game, that’s unique for every person who plays.

Goodman: Some people love switching. They’ll switch like crazy all the time. Then there’s the opposite personality: “I’m only Widowmaker.” It depends on your play style and personality.