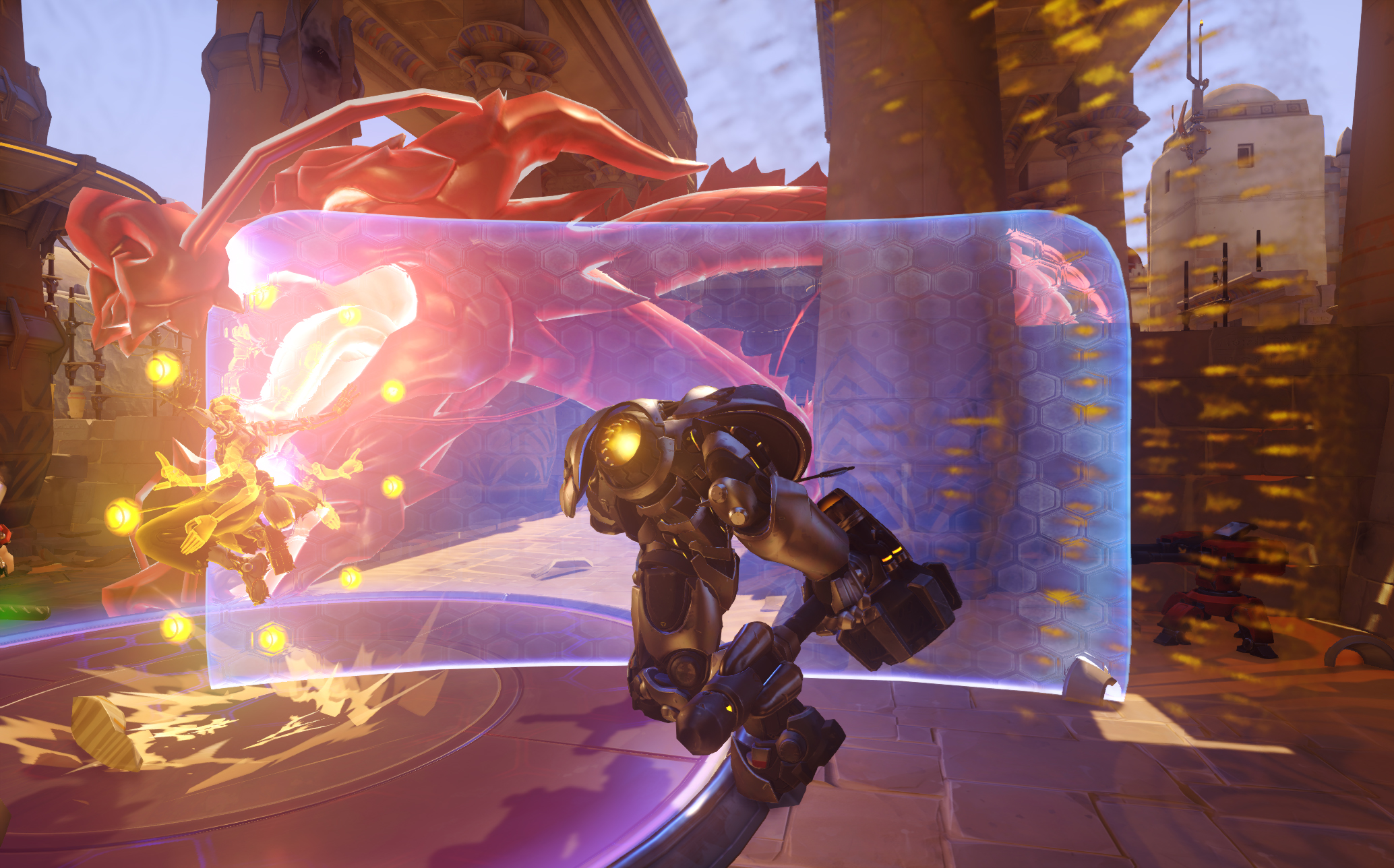 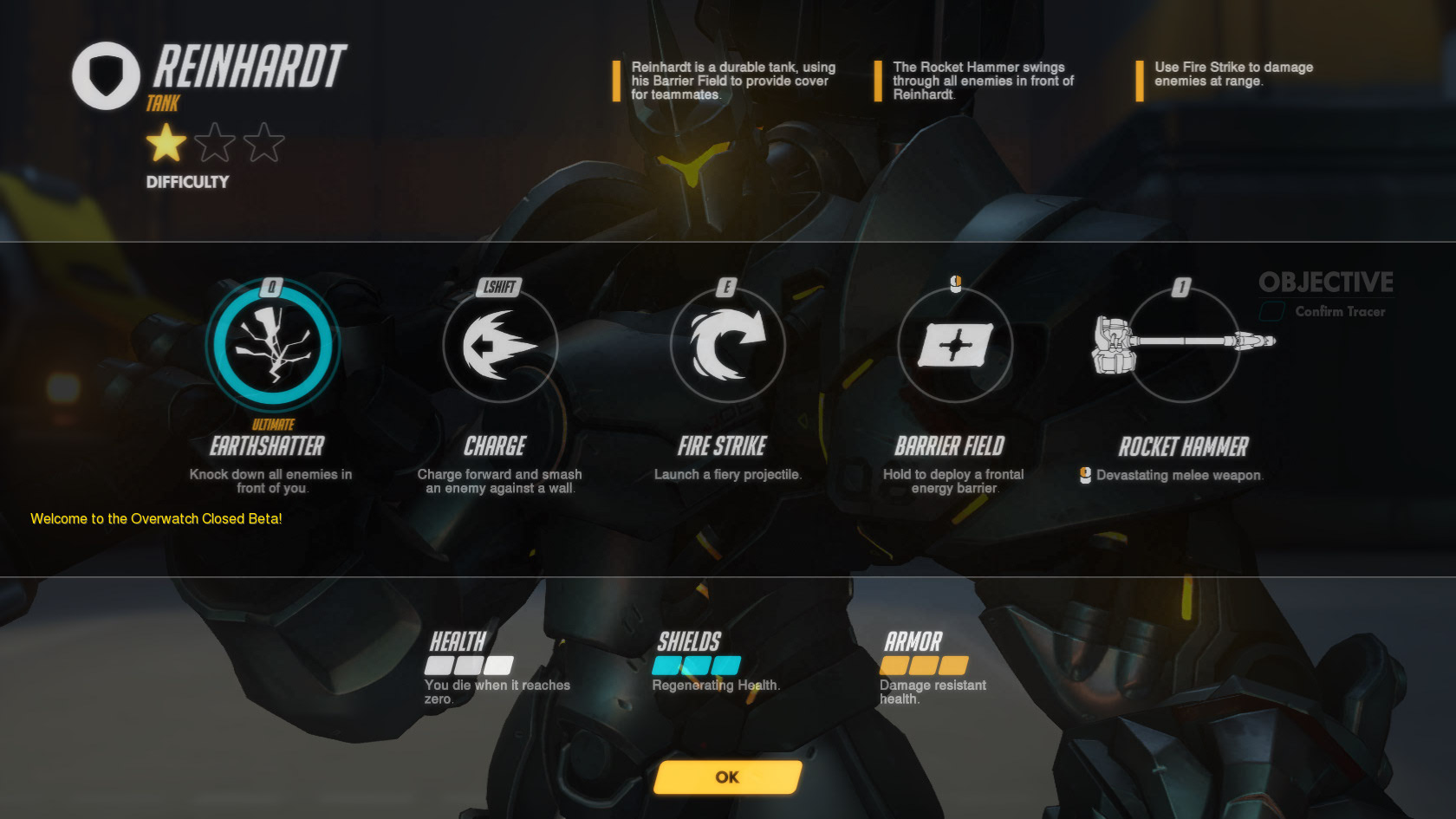 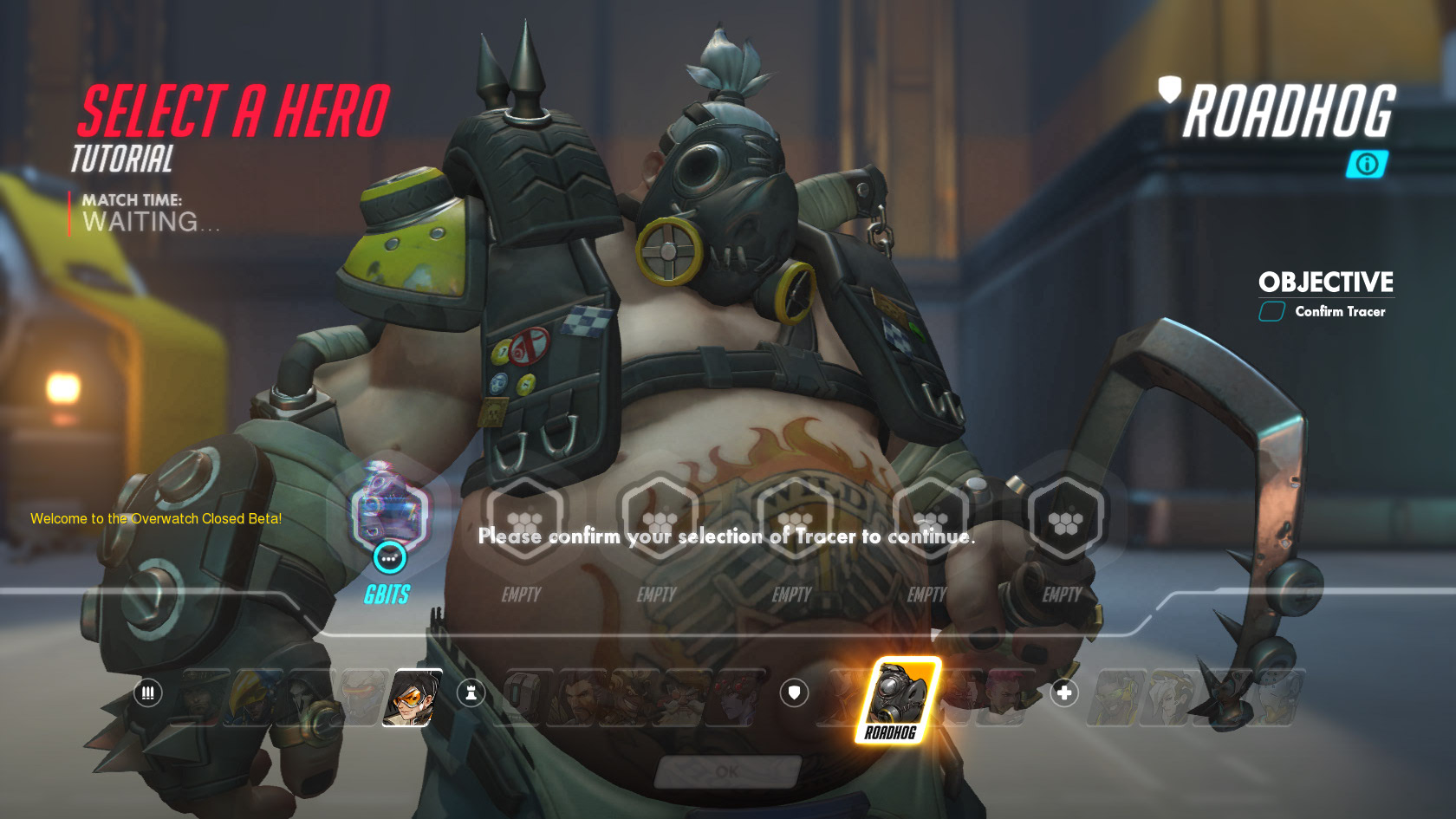 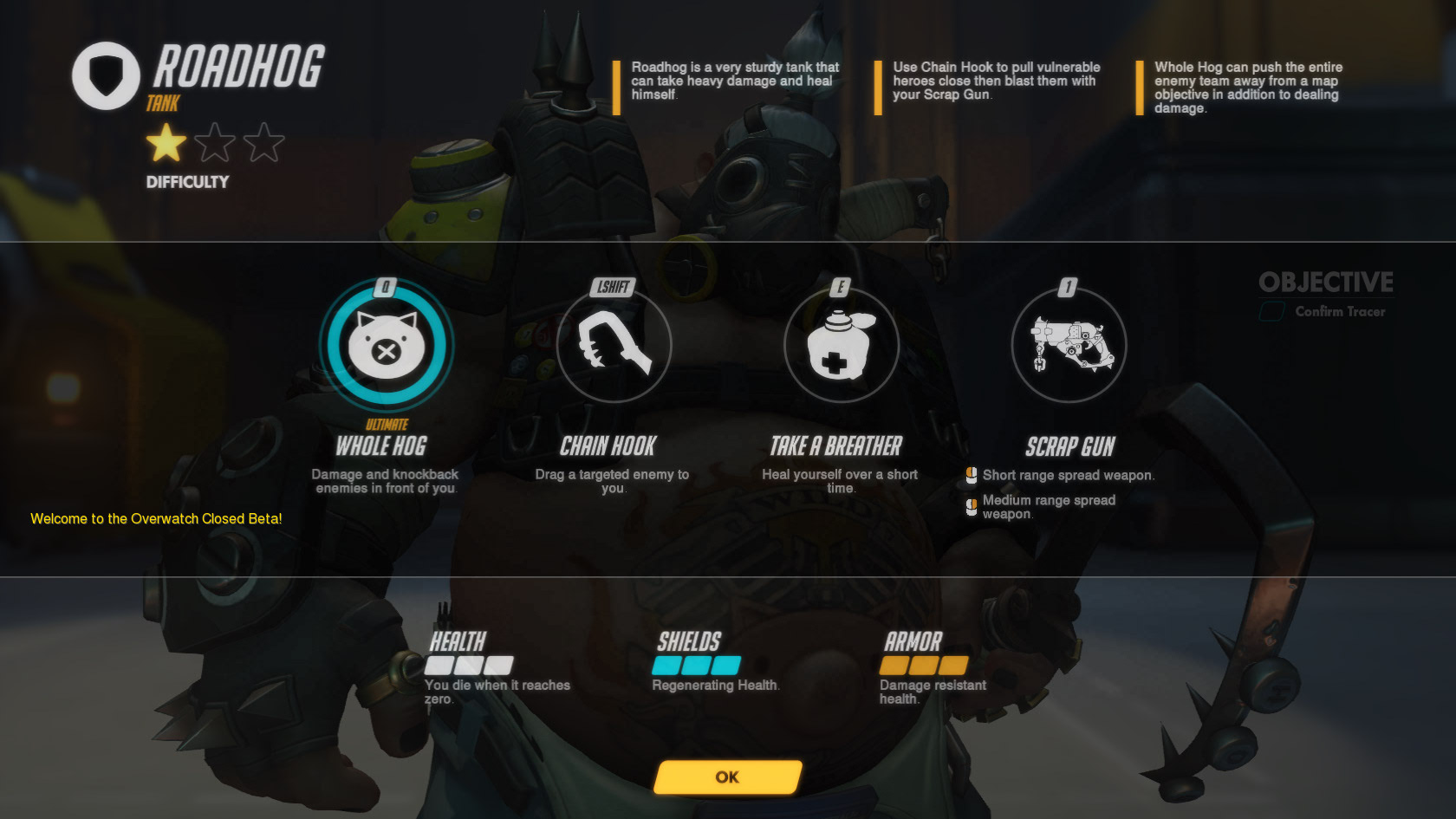 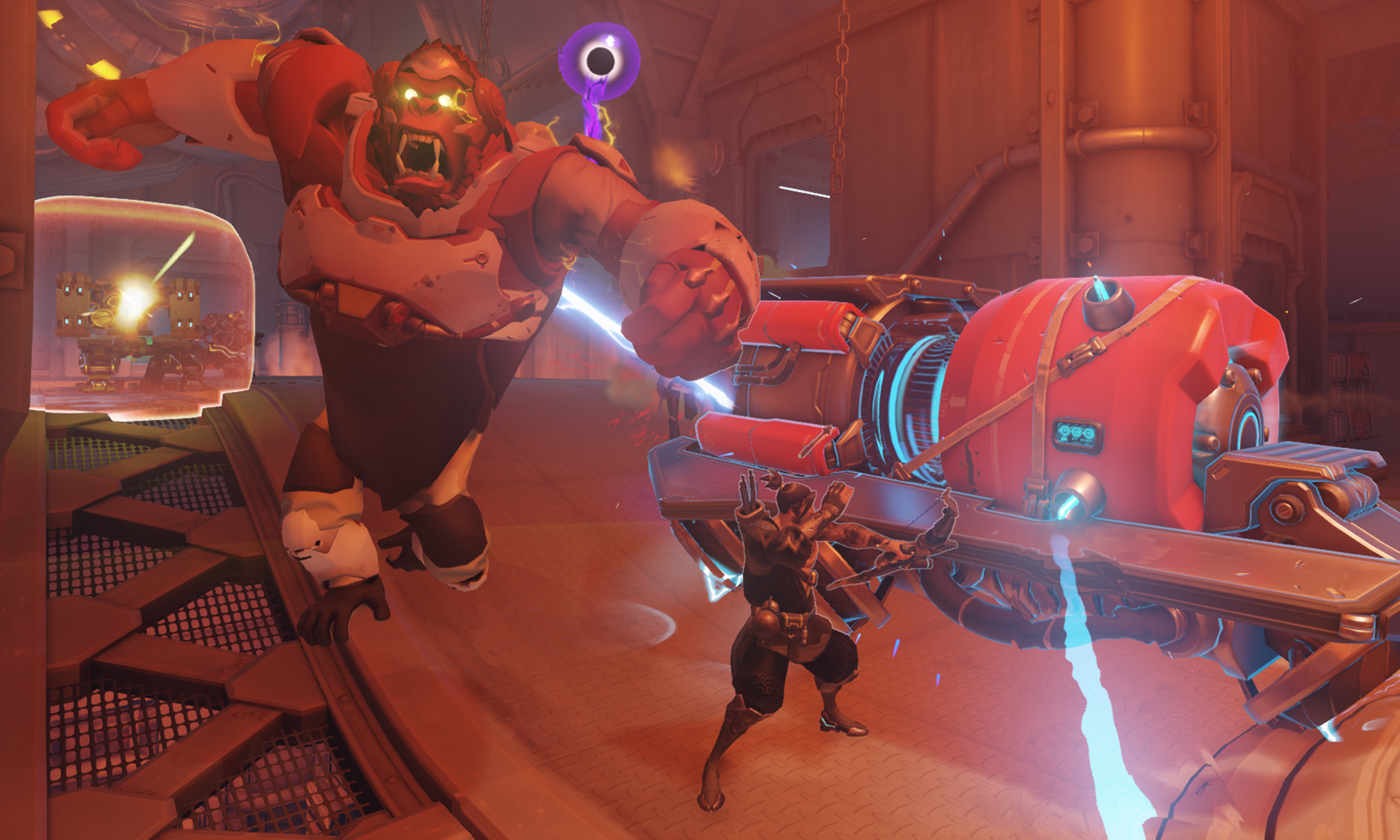 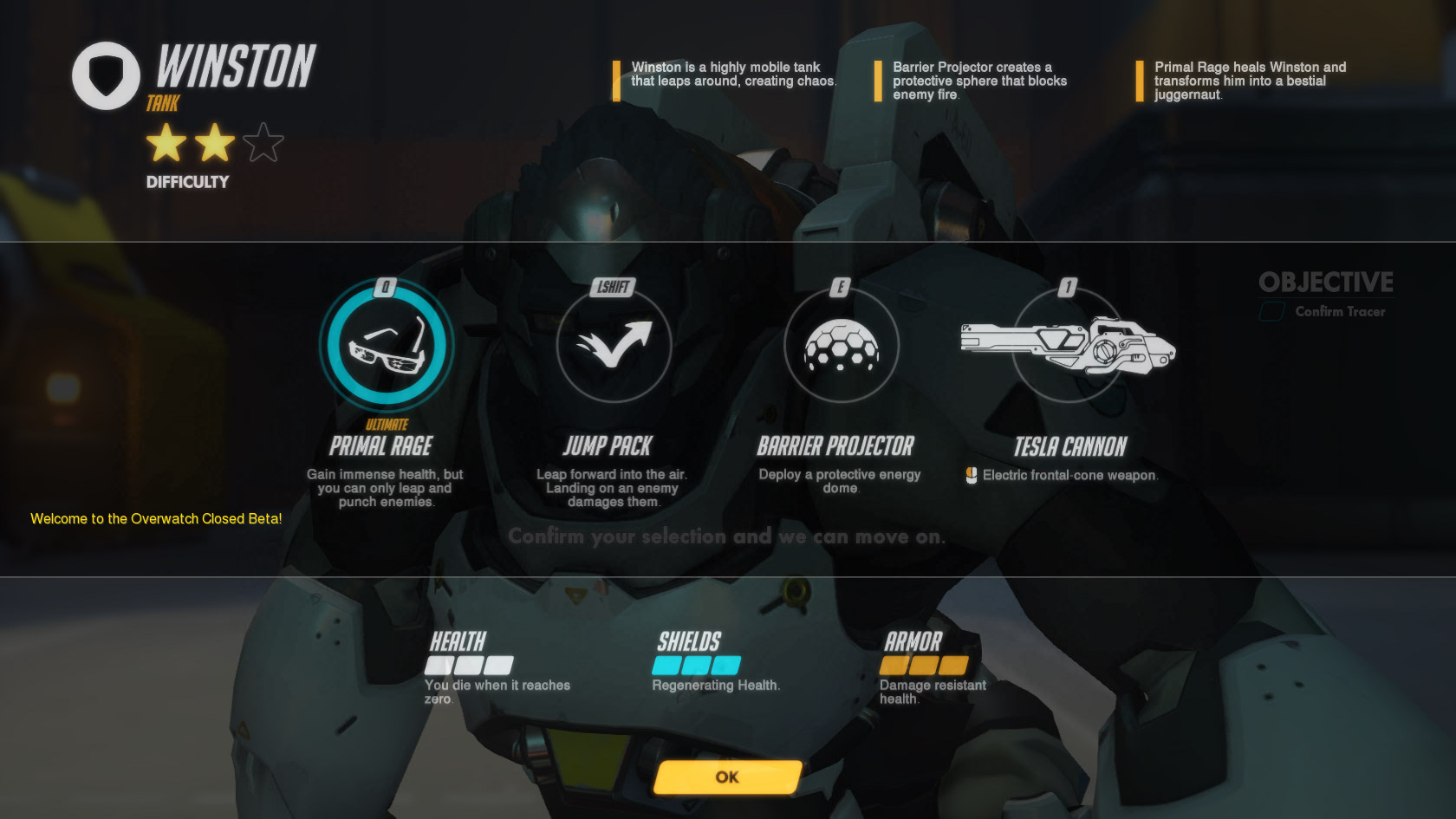 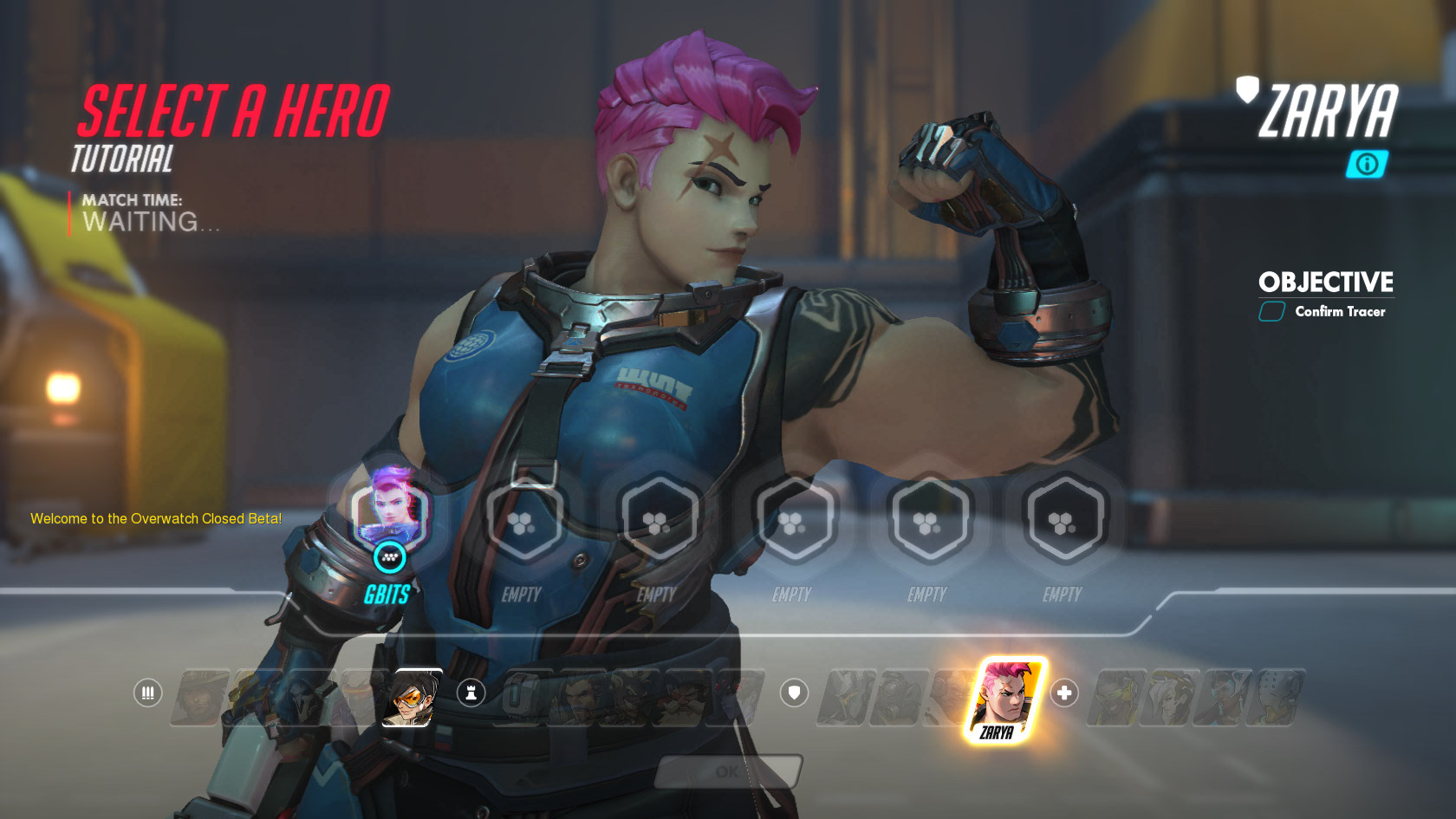 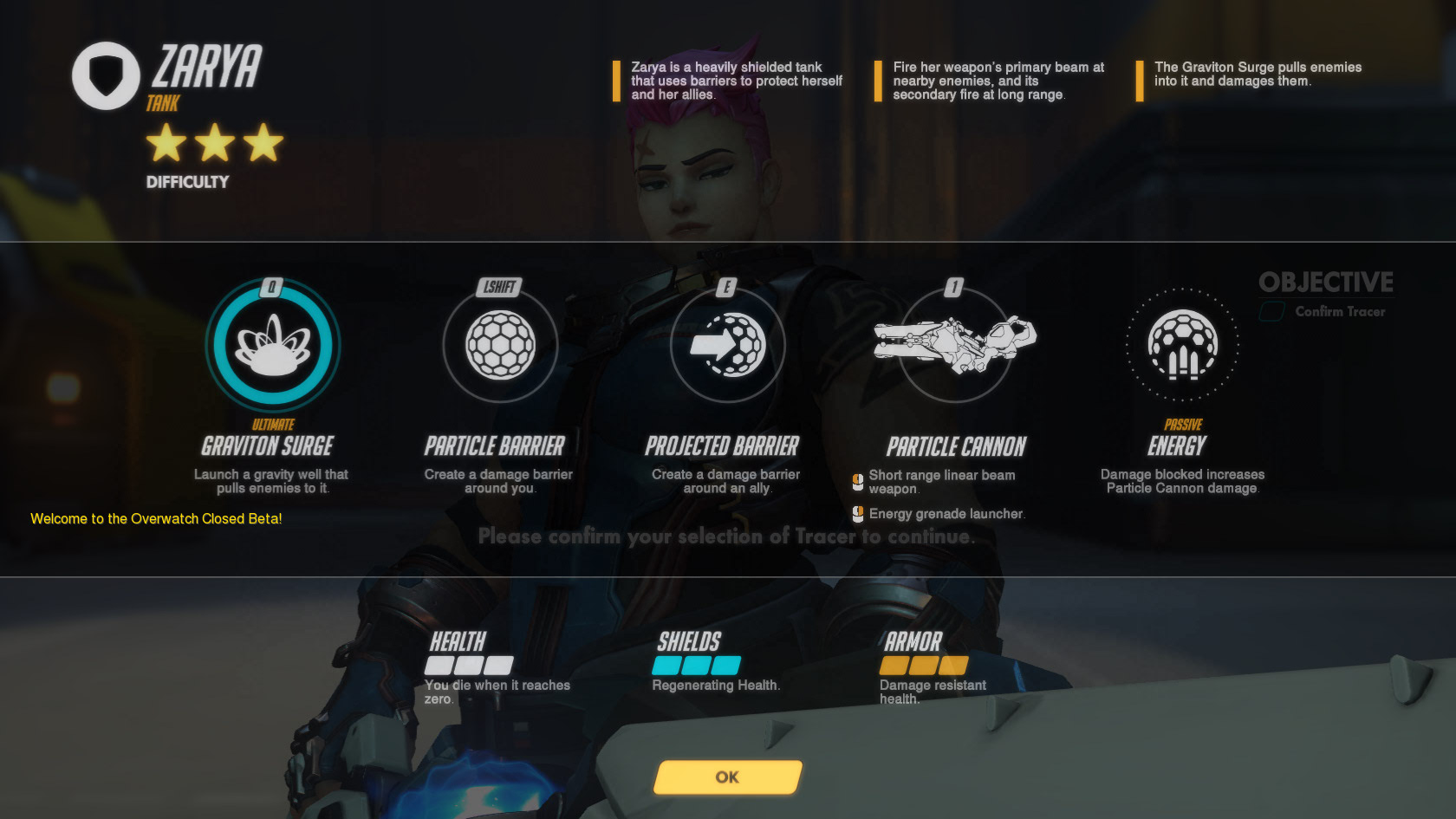 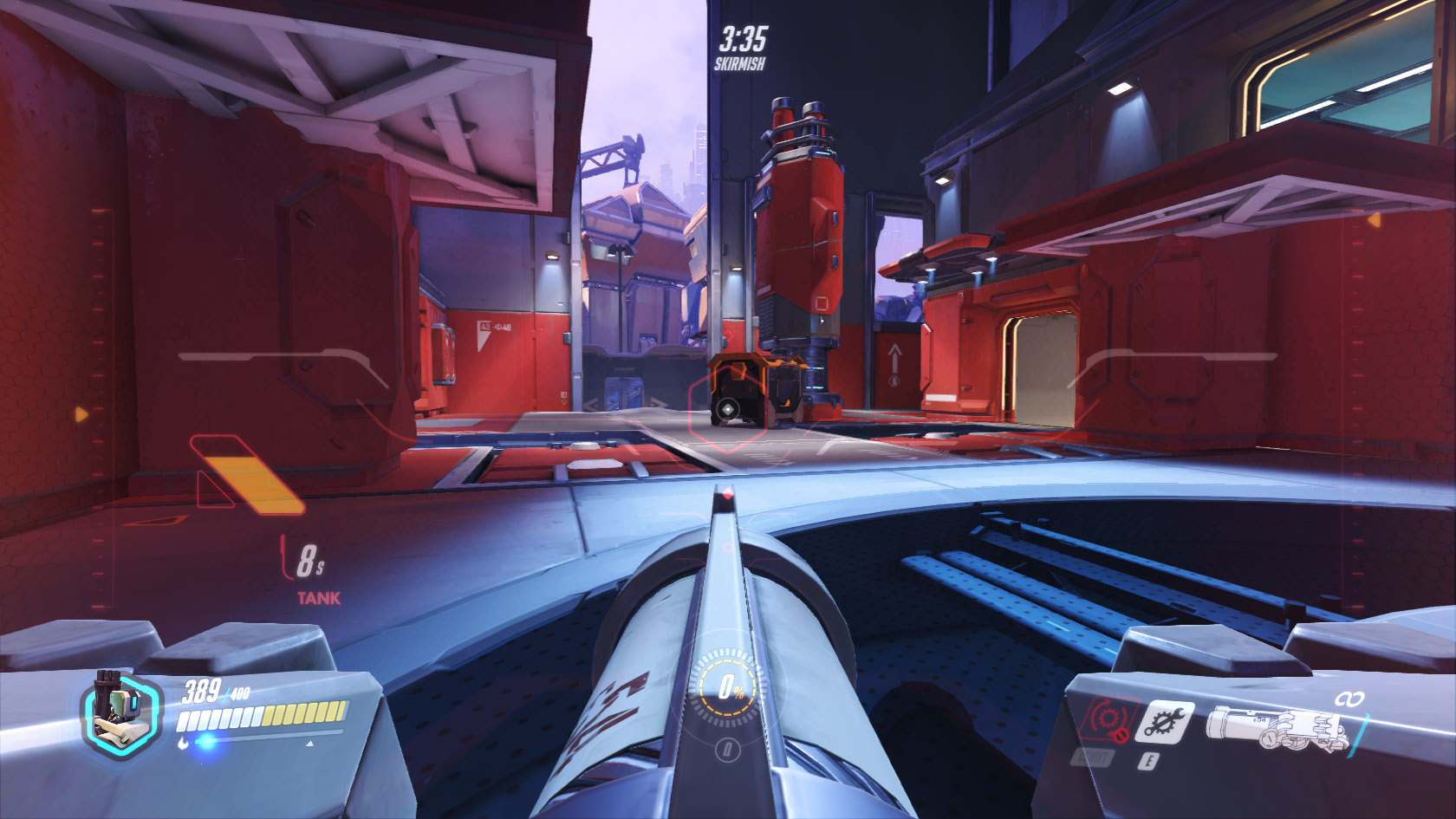 Bastion is one character that can be absurdly overpowered if allowed to turtle. The rail gun’s damage is probably a little overtuned, that shield is hefty, and he has a fairly powerful self-heal. You really can’t ignore him and expect your team to live, and he’s perfect parked in a corner near an objective. 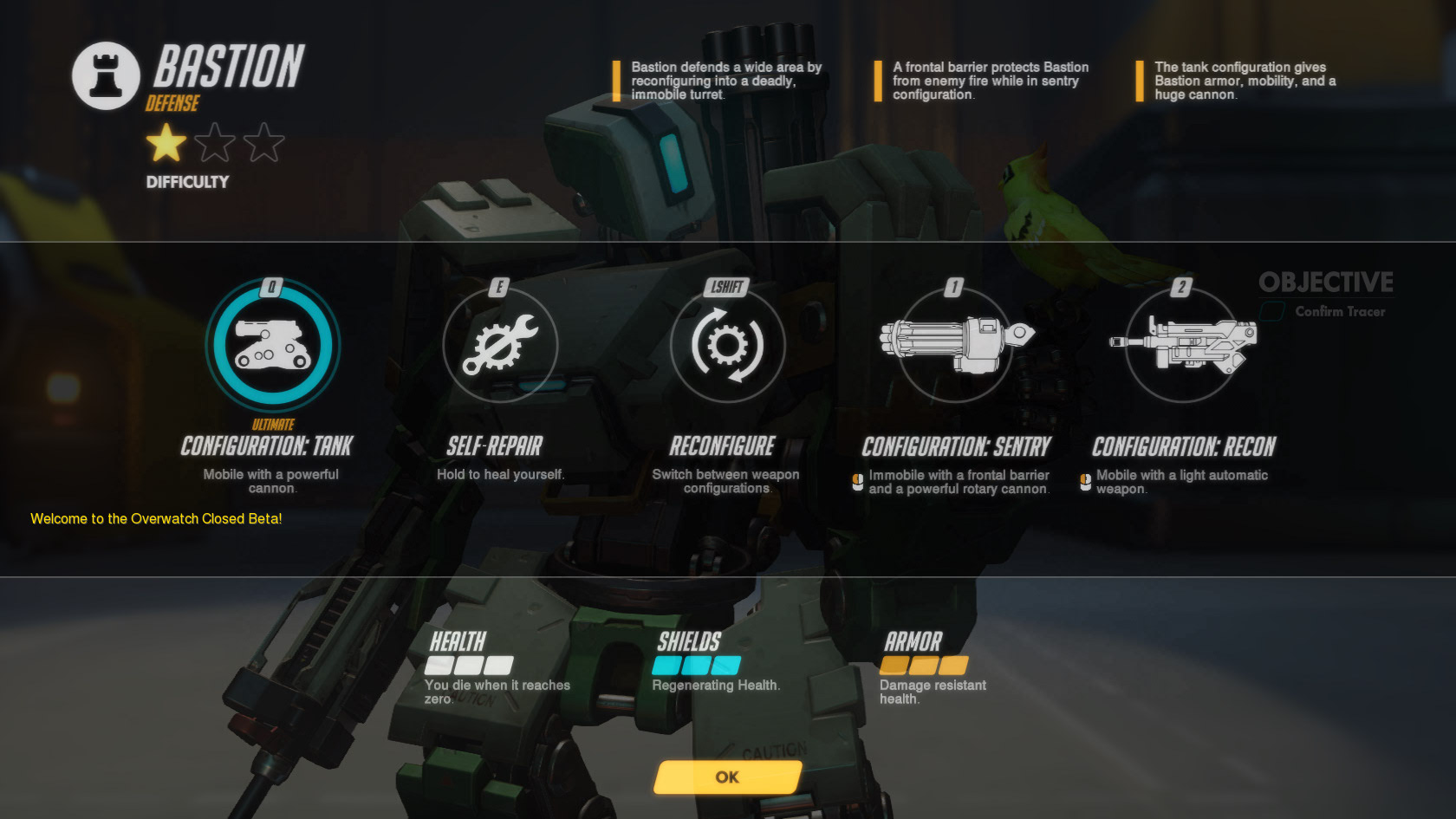 His ultimate swaps him to (literal) tank mode: a mobile monster with a big cannon. 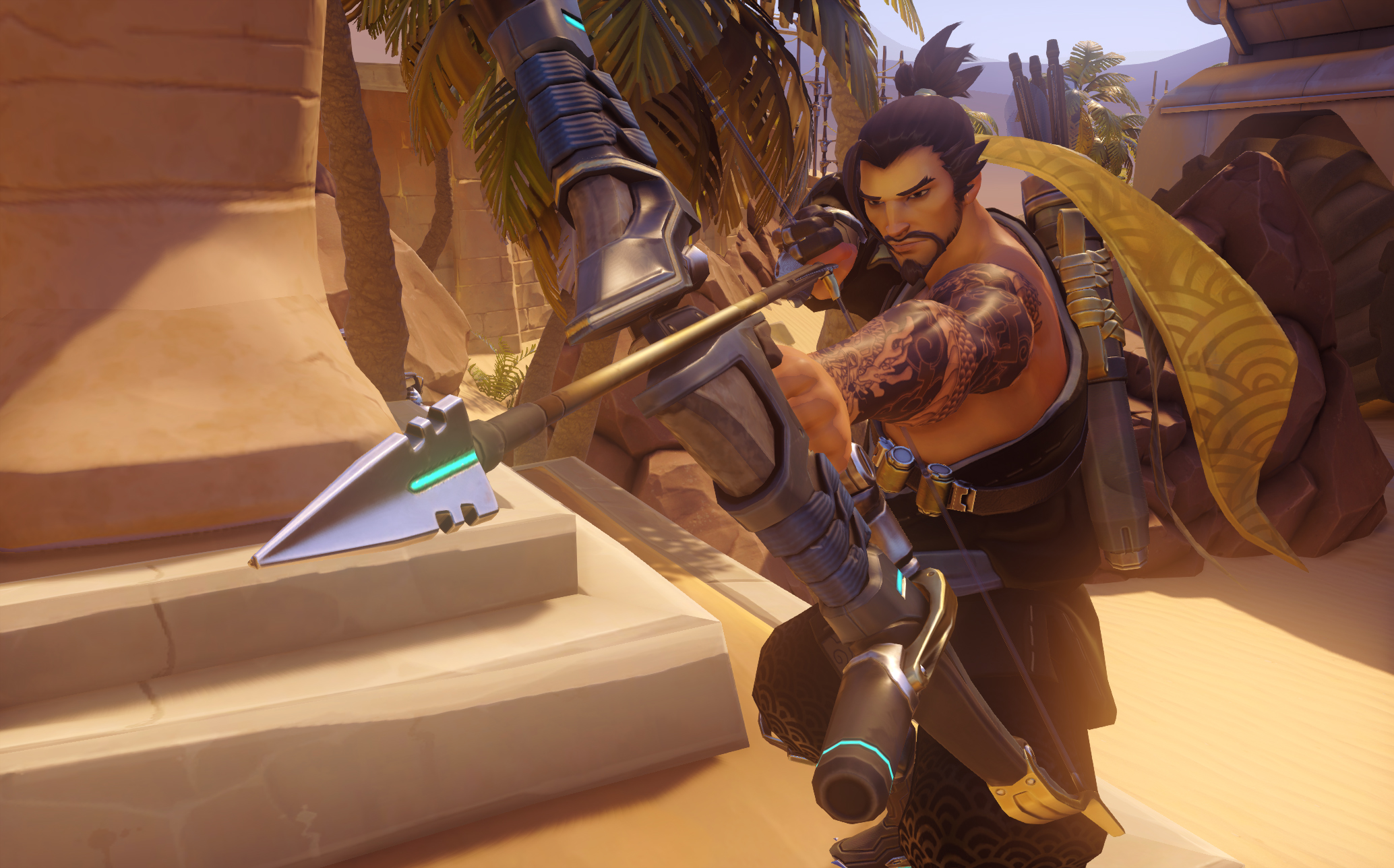 Above: Hanzo, offering some stylish defense.

Hanzo performs as the archer-ninja of the group, shooting arrows and identifying enemies for his teammates to annihilate. He can wall climb, though this was one ability I found a little buggy: Which walls he did and did not want to climb frequently posed a mystery until I tried them.

Hanzo has a single shot that you can hold for longer range, making him a good sniper stand in; a sonic arrow to show enemy heroes skulking around; and a cool-looking dragon spirit (basically a projected area of effect damage attack) that he can fire as an ultimate. 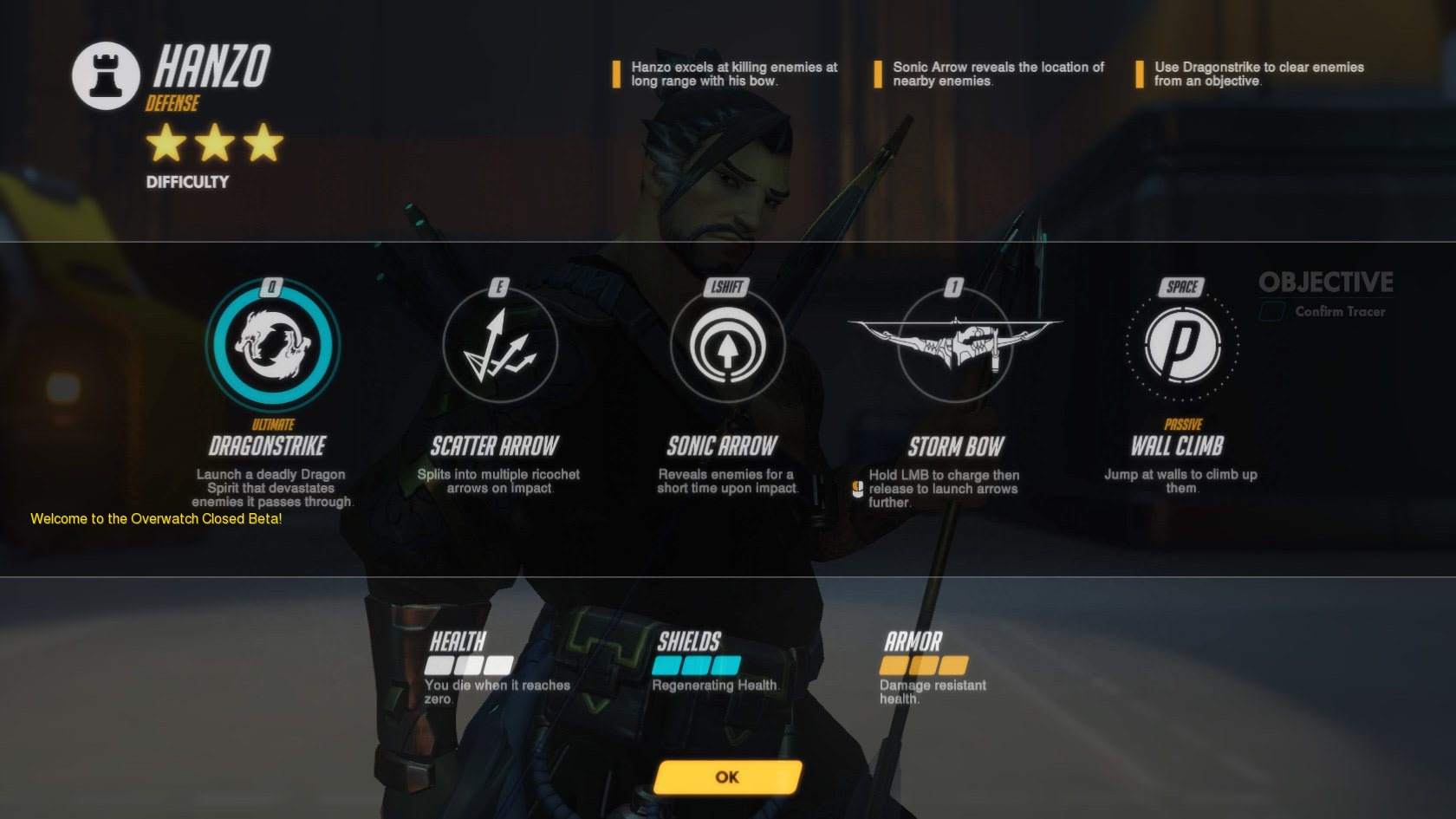 His arrows aren’t overwhelmingly impressive — unless you’ve trapped an enemy in a tight space. Then you can fire a volley of ricochet arrows that bounce off the walls and shred anything unfriendly (leaving your team unscathed.) He can fire those arrows from quite a range, which makes him very interesting for taking out turtled targets.

Unlike Widowmaker, your pure sniper, he can take a reasonable amount of punishment. Blizzard rates his difficulty as three stars. 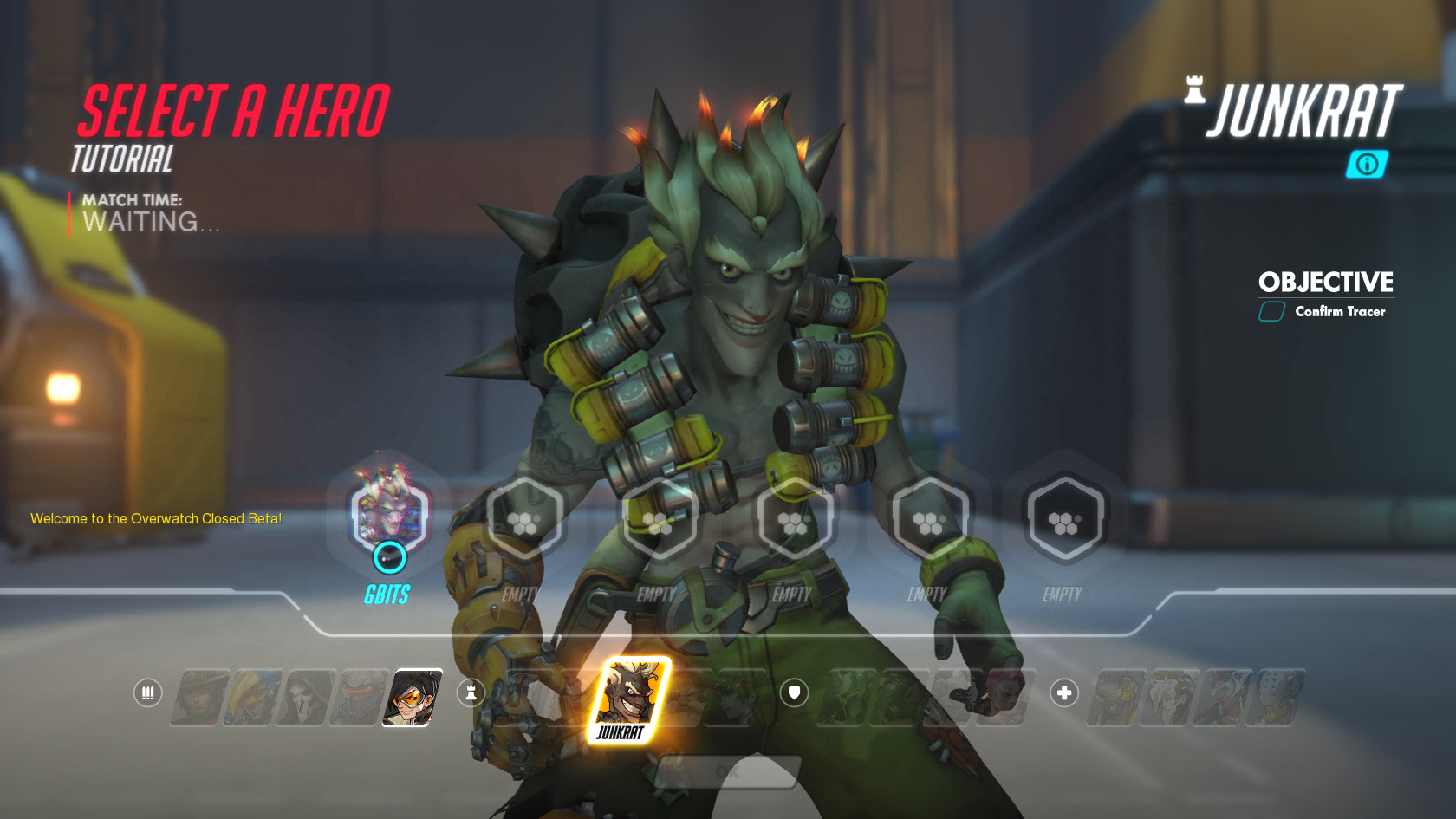 Above: Junkrat kills for the giggles.

Junkrat, a giggling, flame-haired character, looks and moves like the Joker invested in a munitions factory. While he might not be the hero you’d tap for doing direct damage to anyone, his (literal) arsenal of explosives and annoying abilities make him an intriguing defensive troublemaker.

He can throw and detonate a concussion mine, knocking people back or himself into the air. He can drop a steel trap, snapping the heels of fast-moving enemies that you want to get into tank melee range, for example. His primary weapon is a frag launcher, which can ricochet attacks around corners and does a nice bit of close-range damage when the grenade hits. 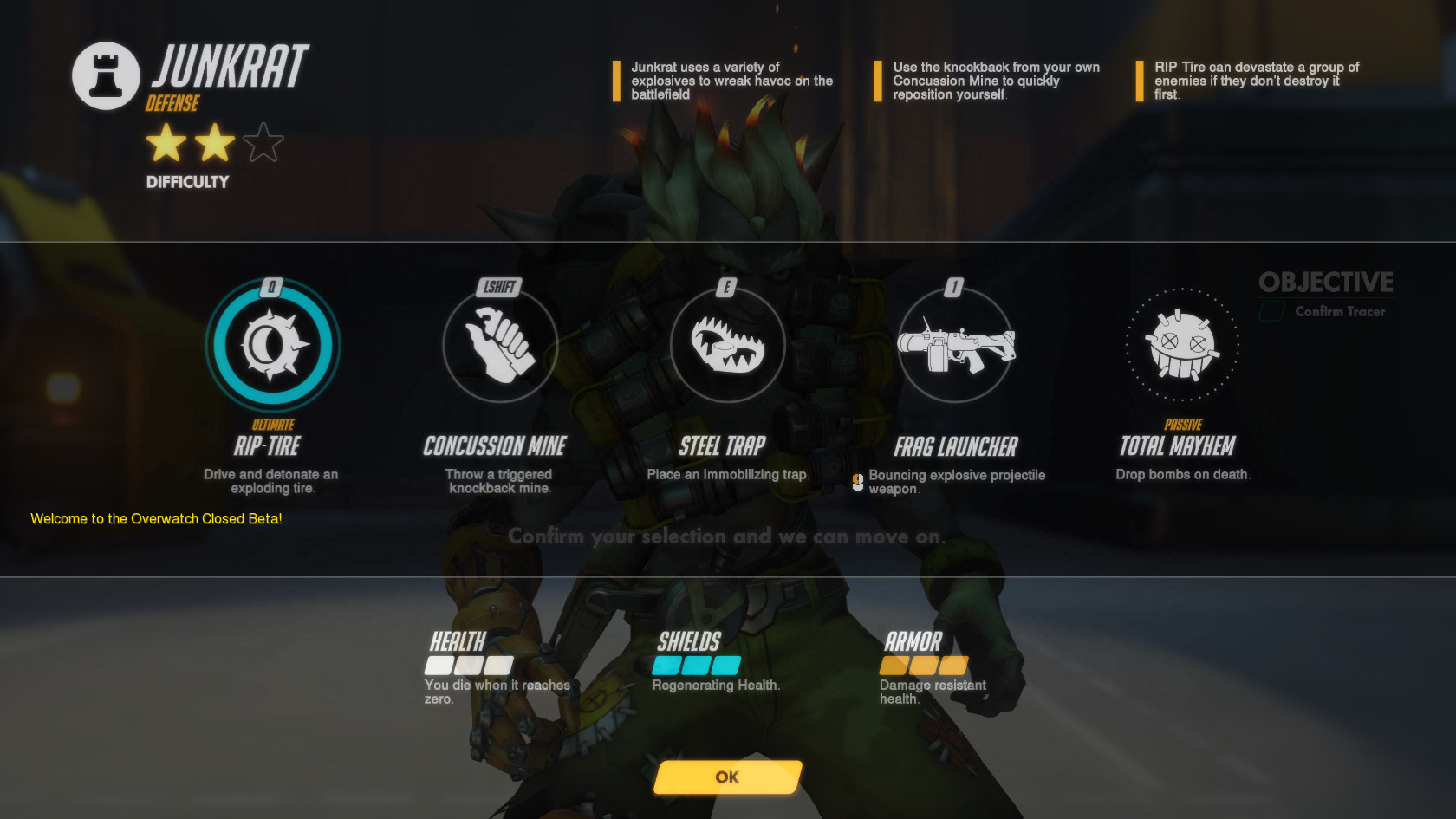 Junkrat moves quickly, but he’s not beefy, and people with good situational awareness will avoid or take out most of his traps. His ultimate is hilarious: He turns into a rolling, hooked, high-damage tire that you can use to ravage a group of enemies until you explode.

And if you kill him, you better hope it’s not from melee: Junkrat drops bombs around him when he dies. His difficulty gets a two-star rating. 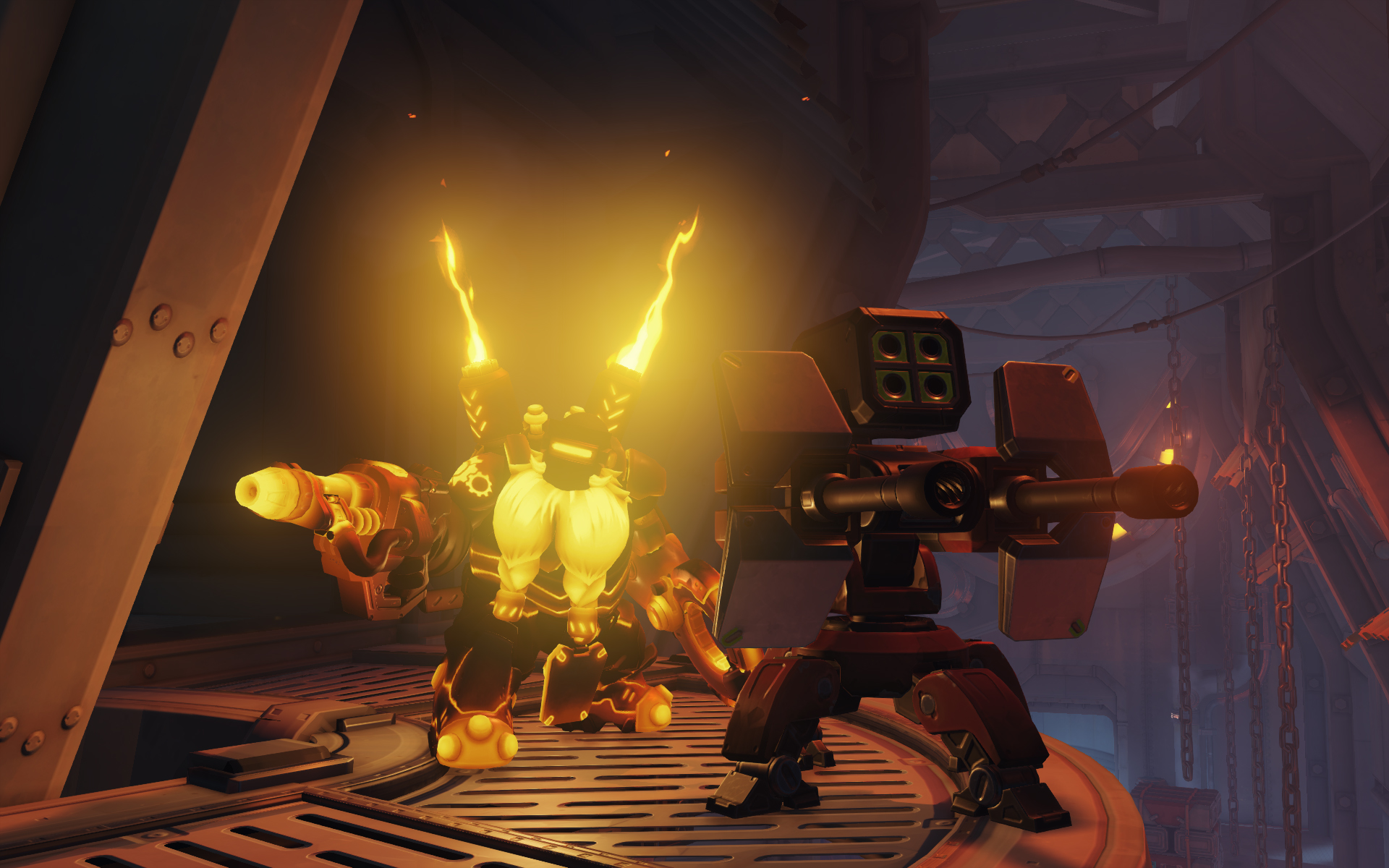 Above: Torbjörn in ultimate mode and his trusty turret.

The dwarf Torbjörn builds things. He can create armor packs for his teammates and a turret that does a surprising amount of damage (compared to Symmetra’s smaller units, for example.)

Ignore him at your peril: Damage to enemies causes them to drop scraps for his construction, and if he gets that turret to level 2, it earns more than twice his own health and can kill an enemy solo. Upgrading the turret or repairing it if enemies have damaged it takes a little bit of channeled time. 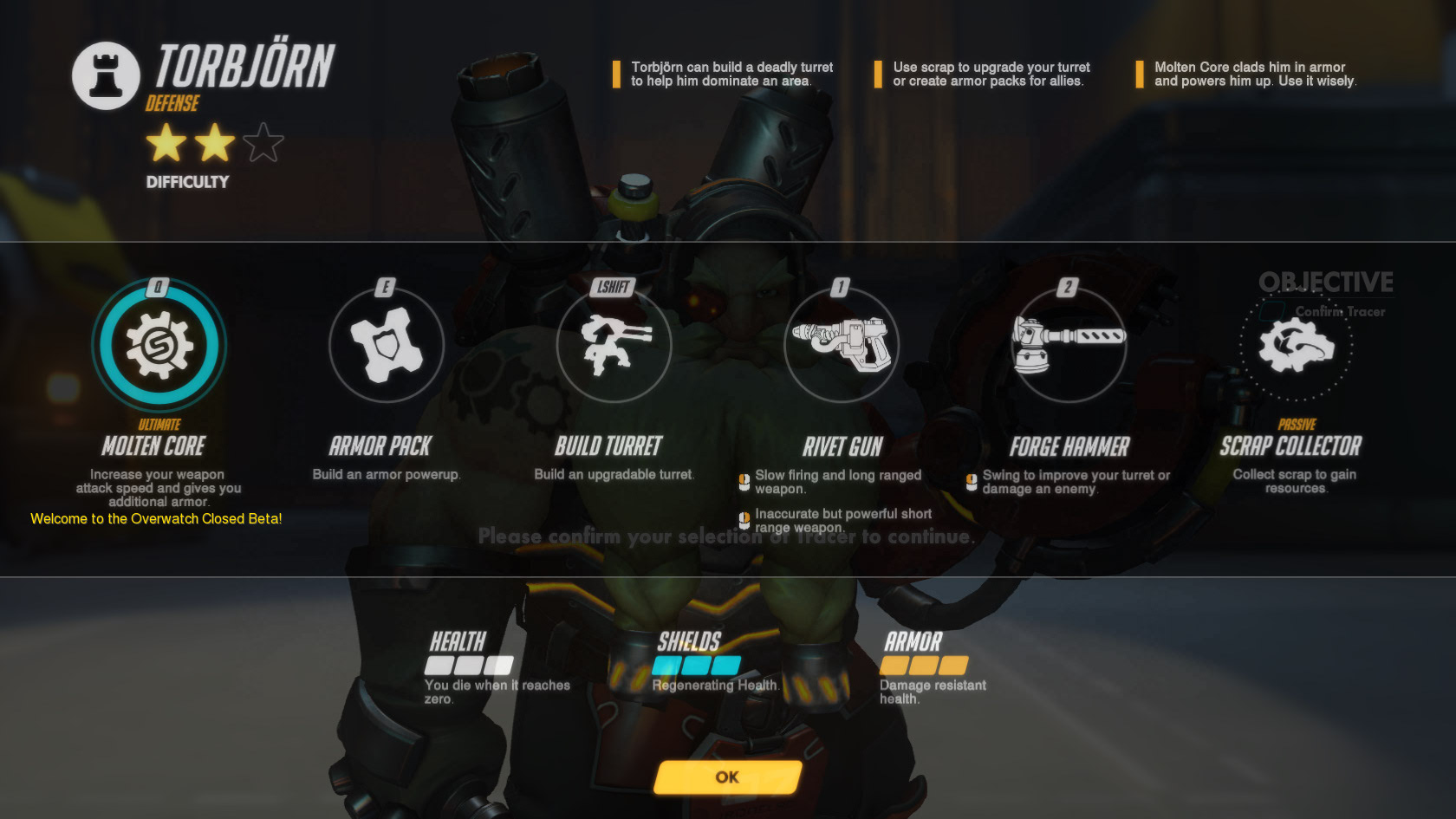 While Torbjörn has a rivet gun — inaccurate but reasonably beefy up close, slow and long-range if held — his forge hammer melee and the turret pump out the real damage, at least in the matches where I played him. His ultimate is Molten Core, a straight power-up with more attack speed and armor. 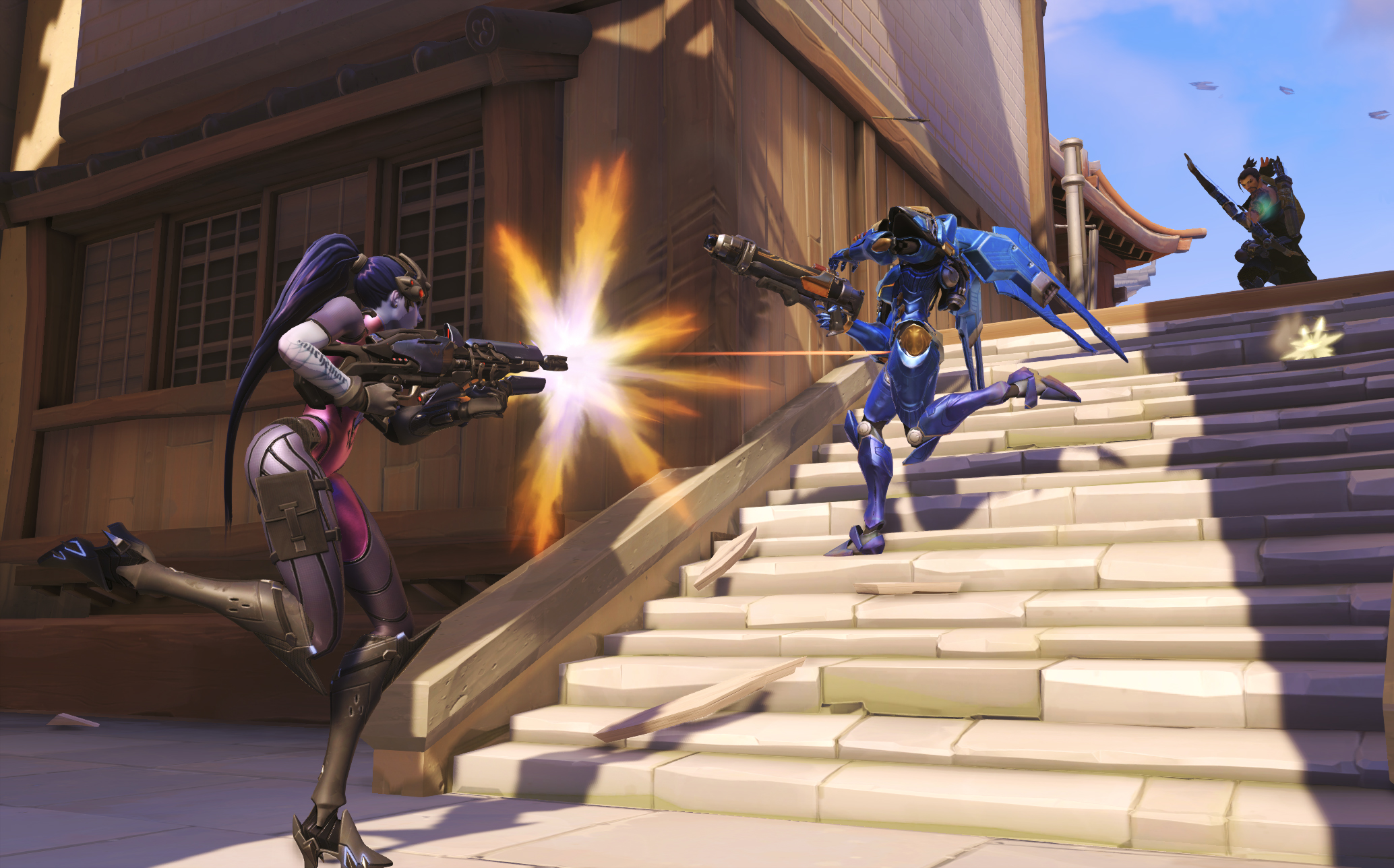 Above: Never do this: Widowmaker has about two seconds to live.

Widowmaker is a ponytailed, StarCrafty-esque catsuit-wearing French sniper. She’s built for getting up high, hiding out, and head-shotting enemies. She can grapple up to ledges, launch (destroyable) poison traps, and her ultimate shows her team their enemies’ locations.

For me, Widowmaker turned out to be all about knowing the maps: where the good high hiding places were, and what angles they could cover. She’s incredibly squishy — definitely the easiest to kill of this group, and possibly even overall — but a well-placed shot from her in sniper mode can be devastating.

She has a shoot-while-moving attack, but it doesn’t do much. The power is in sniper shots, which significantly restrict her movement. 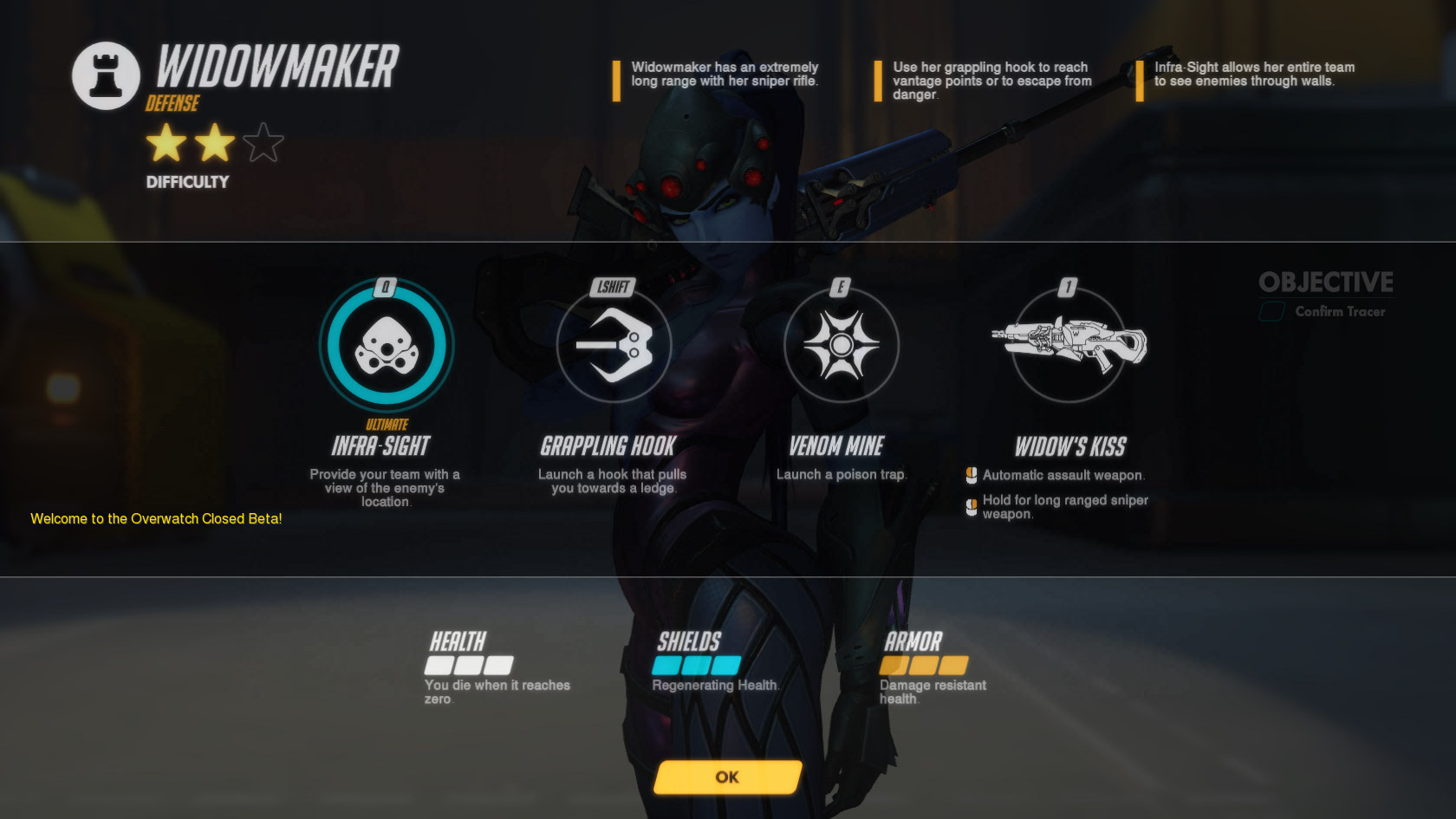 I typically love snipers, that feel of being at a duck hunt booth at the fair and picking off your enemies. But Widowmaker frustrated me, in part because she is SO easy to kill — I spent more time grappling away from enemies than I did climbing to interesting places — and in part because I haven’t memorized all the good map hidey-holes yet.

Blizzard hasn’t announced the launch date for the game (or the planned open beta weekends) yet, but we’re expecting to hear something at BlizzCon next week.