GamesBeat: What other tracks did you create for Overwatch?

Acree: The victory theme was the main one. I did some arrangements of Sam’s — Sam had done the fanfare. I did some arrangements of that. But for the in-game music itself it was mainly the victory theme. But then we had done the cinematics. There was what’s called the cinematic teaser, which is also called “We Are Overwatch,” what they used to announce the — it played before the Star Wars movie.

And then the one called “Are You With Us,” that happens at the beginning when you first play the game. It’s the little opening cinematic for the game. And then we did the animated shorts, which — there’s one called “Dragons” I did and one called “Hero.” They’ve built on the lore and the backstory of the game, because the game itself — there’s no story mode. You just go in and start fighting. The characters are very colorful and vivid, but there’s no specific story in the game. So they’ve been doing these cinematics, essentially short animated films, to tell some of the backstory of the characters. I scored some of those.

Acree: Yeah. Less so in the case of WoW — I’ve done a lot of in-game stuff there — but with Overwatch it’s been more the cinematic side.

GamesBeat: Do you prefer composing cinematics to in-game music?

Acree: I like both. Doing both — they’re such contrasting experiences. Cinematics have a very big scale. Working with visuals like that, it helps — it takes the guesswork out of it. There’s no staring at a blank page feeling. You know exactly what needs to happen. Not to say that it doesn’t have challenges of its own, but to contrast, the in-game music is the chance to do something smaller, more intimate, more personal. Also, there’s a lot more freedom to explore something that isn’t being dictated directly from the — the in-game music is a chance to explore and experiment a little with the music, whereas the cinematics might be a little more like, you have to follow the story very specifically.

GamesBeat: I understand you just recently won a couple of awards. Can you talk about that?

Acree: I won two. One was the — there’s this website called BSO Spirit, a Spanish website, and a festival called the Movie Score Malaga Festival. They have the Jerry Goldsmith awards, named after the composer. Earlier I found out that I had won the Jerry Goldsmith award for best score in a video game for a game I did called Revelation Online, a Chinese game.

Then, when I got there and was presented with that award, they also told me I’d won composer of the year. It was really exciting, and great to be there in Spain at this film score festival. They had some really great film composers there as well. It was cool to be there representing games, and that the guy who won for game scoring also won for composer of the year over the film and short film people there. 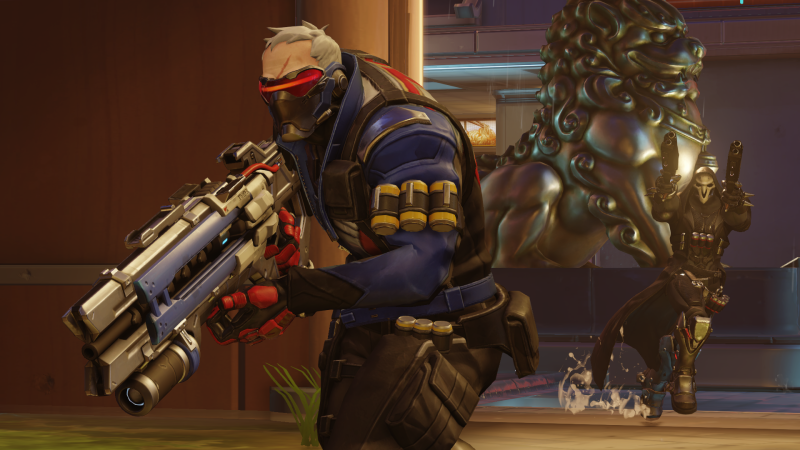 Above: Running toward success.

GamesBeat: It’s funny that they call it the Jerry Goldsmith award. Talking about the mix of heroic and military and sci-fi in Overwatch, the only thing that kind of comes to mind is Star Trek. You get a little bit of that Jerry Goldsmith feeling in the score.

Acree: Yeah, I’ve been a fan of his for a long time. I worked for his son for many years. I consider him a mentor, Joel Goldsmith.

GamesBeat: What other projects are you working on now?

Acree: As I mentioned, there’s this game called Revelation Online, a Chinese fantasy MMO. I’ve been working on it off and on for the last couple years. It’s going to be released in Europe later this year, and North America early next year. That game — being a Chinese fantasy score, it allowed me to — they wanted me to write Chinese music. I had done something like that with [the World of Warcraft expansion] Mists of Pandaria. This was a chance to explore that further and go a little deeper. Doing that led to a few more games for the Chinese market.

What’s cool about this is that they — we just recently released on Verese Saraband records, which is predominantly a film score label. This is only the second game soundtrack to be released on that label, and the first in something like 15 years. It’s cool to see that game soundtracks are being accepted by film score fans. They’re starting to gain acceptance in that market, which didn’t previously see them on the same level as film scores.

GamesBeat: Having your music in Blizzard’s games seems like a big success. Is it cool to have that much exposure and that many people listening to your music?

Acree: It’s incredible. I’ve gotten to conduct some of the music in different countries on four continents now. Every time I do that, getting to see the worldwide acceptance and popularity of game music is incredible. I try not to think about it too much, because you drive yourself crazy if you write something thinking about how many millions of people are going to listen to it and scrutinize and pay attention to every note. All I do is try to write music that moves me emotionally, and I hope that it has the same effect on people listening to it.