“There’s an opportunity to do free-to-play content on consoles if you approach it properly,” he said. “When you talk with consumers about what they would want or expect in a free console experience, they’re still looking for a true console experience: triple-A quality.”

Take the popular free-to-play massive online battle arena game League of Legends, for example. “There is no comparable experience on console. There is an opportunity for something of that caliber to be successful,” Anderson said. “The greatest challenge is that people only have a limited amount of time, so you’re competing against other console and free-to-play titles.”

The other challenge to the launch of F2P console titles is the lack of development expertise, he said. Licensing and developer relations are very different in the F2P space and, until recently, were nearly impossible to achieve on consoles.

“Both Sony and Microsoft have solid channels for indie publishing that have opened the door,” he said. “But demand for going through that channel is much larger than those groups’ capacity at this moment. I’m very confident that somebody will crack this, the way they have on Facebook, and then on mobile, and then on PC.” 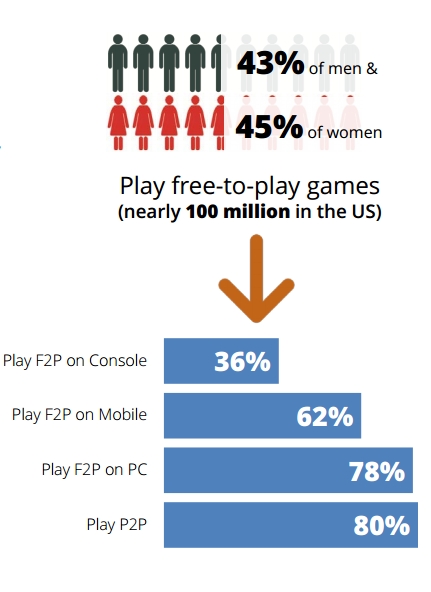 For a fun look at gamers who play free titles, see Insights Meta’s interactive infographic. The survey was conducted online in September, of respondents aged 13-65, all of whom said they played console, PC, browser, or mobile games. Of the 2,200 responses, 1,750 were accepted as valid (obvious fakes were removed). Some data in the study was taken from an August Google poll with a sample size of 3,000.