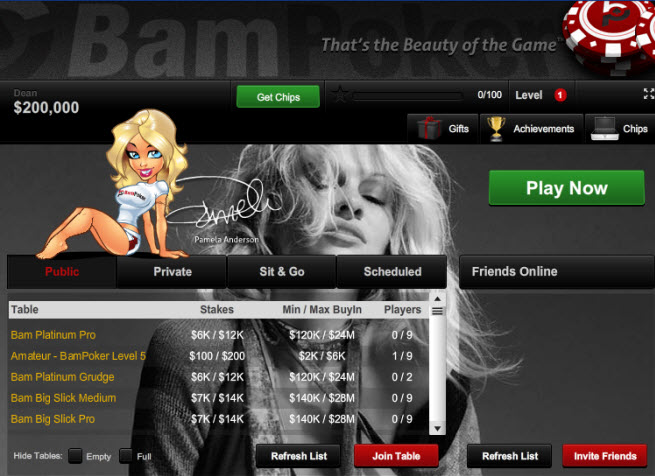 Zynga has the biggest online poker game in the world, but actress Pamela Anderson has the biggest…well,  a bigger name. So she is entering the Facebook social gaming market with a new title called BamPoker.

The celebrity tie-in could help the new poker game stand out among many competitors. It’s another sign that social casino games, which are now played by 13 percent of all Facebook gamers, rank as one of the hottest and most crowded categories in gaming today.

BamPoker combines speedy Facebook poker gameplay, an online community, and the appeal of actress and supermodel Anderson. Zynga, on the other hand, has a five-year head start and it has 33.7 million monthly active players on Facebook.

BamPoker users can play Texas Hold ‘Em poker with former Baywatch star Anderson herself and talk with her via a fan page. The game pits real people against one another in both casual and tournament-style play. It’s a free-to-play game where you purchase virtual chips for real money if you want to. The goal is to obtain a VIP badge so you can play with the elite at exclusive tables.

BamPoker is the creation of Canadian entrepreneurs Elton Pereira and Jeremy Nichele.

“In a poker game, anything can happen,” Pereira says. “Even a flop can make you a winner.” Hence BamPoker’s motto: “That’s the Beauty of the Game!”

“When I first met Elton and Jeremy, I knew they were on to something special,” Andrerson says. “They weren’t interested in creating just another game — they wanted to take the social elements of online poker in a bold new direction. There is nothing like BamPoker out there today, and I am excited to be a part of such an innovative platform.”