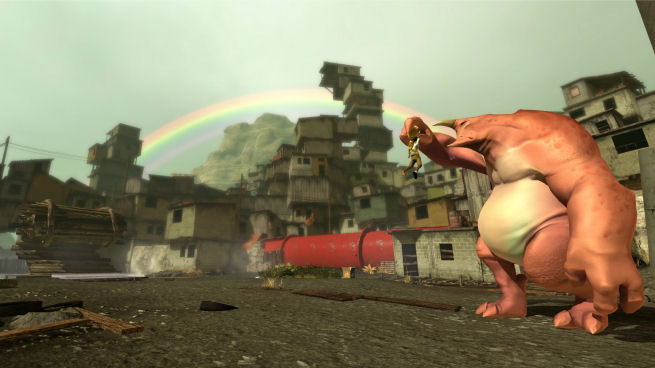 The time is ripe for independent studios; they can make any beautiful, inspiring idea into a game and expect it to sell. Developer Thatgamecompany took players on a wordless adventure with Journey, and Playdead’s Limbo made us ponder what happens to us after death. An indie game that combines the rich culture of graffiti with a tale of overcoming abuse sounds like just the magic ticket. But even the most moving recollections can leave out a few key parts.

A meaningful story
As far as contributing to the artistic side of the medium, developer Minority Media’s Papo & Yo deepens the collective pool and shows how powerful games can be as a means of expression. Creative director and writer Vander Caballero effectively captures the traumatic experiences of a young boy named Quico, who endures the ongoing abuse of an alcoholic father. When the boy escapes into a magical world, however, helplessness turns to empowerment. In the shifting city, which players can manipulate like a toy, we meet Monster, a seemingly gentle beast who turns into a demon when he ingests wild green frogs.

Visually powerful
Papo & Yo relies heavily on visuals to tell its story and emotionally invest players, and that means the game uses cues in the environment to point them in the right direction. It also takes the time to develop a complicated relationship between Quico and Monster through different visual narratives and scenes.

If players get stuck, the hint boxes located in convenient spots are a fun way of setting them on track again without spoiling the full experience. The way you use the boxes is cool, too. Quico puts one on his head, revealing a series of helpful child’s drawings on each of the inner sides. Exit this screen and you can run around wearing it for as long as you like.

Child’s play
The game’s five to seven hours of puzzles are short and relatively easy, but their simplicity doesn’t make them any less enjoyable. Like the architecture, the game twists on itself at every corner, and no puzzle feels the same. Each one is as distinct as the colorful graffiti strewn across the city walls.

The city itself resembles a living creature with humor and charm for its flesh and blood. You can pick up the fat frogs and splatter them on the wall, causing them to vanish. Small, box-like houses will sprout legs and wobble away to cartoony sound effects, and your chipper toy robot Lula boosts your jump with its jetpack. You can even use Monster’s giant belly as a trampoline when he’s sleeping. Little details — like losing a shoe or even finding stray soccer balls to kick around — give the game more personality and a genuine sense of change.

Finally, the minimal controls are friendly to gamers at any experience level, creating a prime opportunity for players to focus on the story as much as the gameplay.

One step back
Unfortunately, Papo & Yo suffers from a mess of technical shortcomings and problems that do impair progress and overall enjoyment of the game.

While the environment is a lovely sight to behold, the character models are outdated, and their lips don’t move when the characters speak. It’s a little strange, especially considering that they exhibit facial expressions plenty of other times. 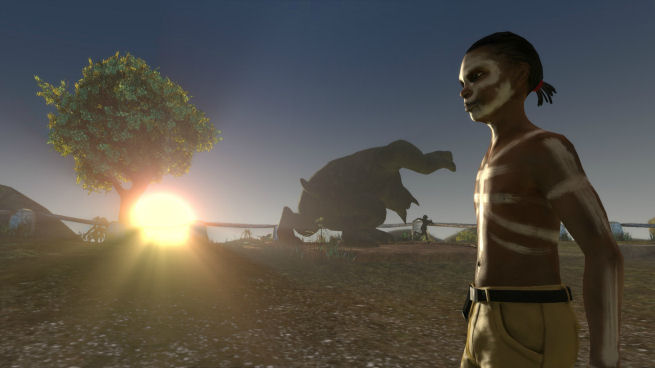 Unnecessary handicaps
For a game that involves a lot of running and jumping from platform to platform, Papo & Yo would have benefitted greatly from the ability to grab ledges. This isn’t a game designed to test a player’s skill. Rather, it’s about communicating a message about a real-life issue and designing a game that immerses players in a fantastical and liberating world. Handicapping players isn’t necessary.

Neither is slapping a timer on one puzzle early in the game. This particular challenge gives players only so long to traverse a set distance and pass through a gate, but it’s the only instance of a timed challenge in the entire game.

Glitches and bugs
Another puzzle later on makes absolutely no sense, and to make matters worse, the area’s hint box is sitting on top of a nonexistent floor. Try to pick it up, and you’ll fall straight through the environment.

Unfortunately, this isn’t the game’s only serious glitch. You’ll deal with slowdown for the entire duration of Papo & Yo, but it worsens significantly toward the end. Occasionally, you’ll snag on the terrain when running, too. These two problems are annoying and frequent, but at least you won’t have to restart like with the game-breaking glitch mentioned above. 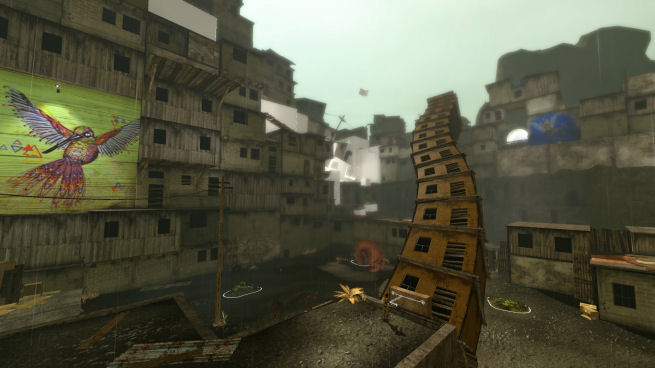 Papo & Yo is a welcome addition to the growing library of creative indie games whose purpose is greater than just engineering fun gameplay, but minor technical issues turn into major woes for Minority Media’s debut release. A little more polish could have saved players unnecessary grief, and it’s that kind of inattention that will keep some gamers away from an otherwise delightful game that’s full of lighthearted humor and dark monsters a little too real for comfort.

Papo & Yo was released for the PlayStation 3 on August 14, 2012. The publisher provided GamesBeat with a download code for the purpose of this review.