Party Hard, the game about mass killing that’s OK to love, releases on Steam on August 25.

Party Hard sees you going on a murderous rampage after your neighbor’s late-night parties finally tip you over the edge. It was a surprise winner of the Critic’s Choice award at this year’s Casual Connect Europe conference, particularly given the negative reception to another recent game about mass murder, the controversial twin-stick shooter Hatred.

The final build of Party Hard contains features not previously seen, including semi-procedural levels, firemen, ambulance crews, the DEA, and shady dealers to buy things from. Looking at the gameplay footage, it still includes a little 8-bit version of the popular YouTuber PewDiePie that you can stab (he’s dressed in green and collapsed over a desk).

Publisher Tiny Build Games hasn’t given a release date for the mobile version of Party Hard, which is heading to iOS and Android at some point. We’re still waiting for further details of a forthcoming console release, too.

I asked the guys from developer Pinokl Games about comparisons to Hatred when I played Party Hard at Casual Connect, and they said the pixelated art style and cartoon nature of Party Hard make it less cruel and gory. 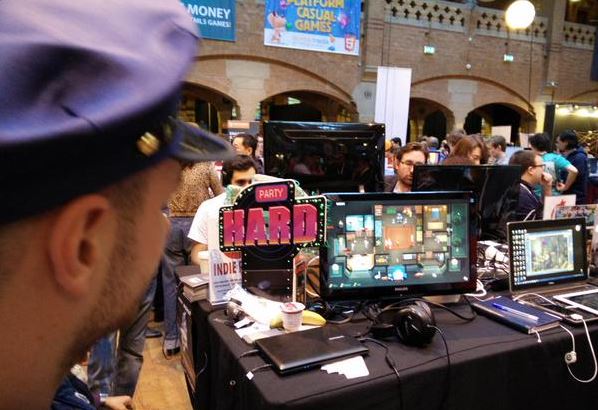 Team member Alexandr Potapenko told me that there’s definitely a place for games like Party Hard. “People get fun from killing in other games,” he said. “It is a way for us to give up our bad emotions after a hard day. Kill someone in the game and then just relax and spend good time with your family.”

Jarosław Zieliński, the chief executive officer of Hatred developer Destructive Creations, was unimpressed by the positive reaction to Party Hard. But he still wished the developers luck with their game.

“Suddenly it appears it’s a great thing to make a game about killing innocent people, yes?” he said. “Right after throwing tons of shit in our direction for making actually THE SAME THING? Someone will tell me now, ‘It’s pixel art, it’s different,’ but I would tell him to f*** off, because what is the difference between killing pixels and killing polygons? None. At all. It’s harmless for the real world in the same way.”

While you’re waiting for Party Hard to release, you can play a flash version of the prototype — originally created for a game jam — over at GameJolt.