Esports and game videos are driving explosive growth in livestreams, according to study by game research firm SuperData Research and payment company PayPal. But the company also found a gender imbalance in pay. Women are less likely to be paid for their streams than men.

PayPal said that 34 percent of livestream viewers in the U.S. have spent more than $50 on livestream content in the past few months. But despite the growth in spending, almost half of women content creators (43 percent globally, 47 percent in the U.S.) don’t get paid for what they create. The U.S. had the largest gender pay gap of the countries surveyed: Almost half as many men (24 percent) do not get paid for content they create.

The gender imbalance was a surprise, and it’s something that should be addressed, said PayPal’s Adriana Bello in an interview with GamesBeat. 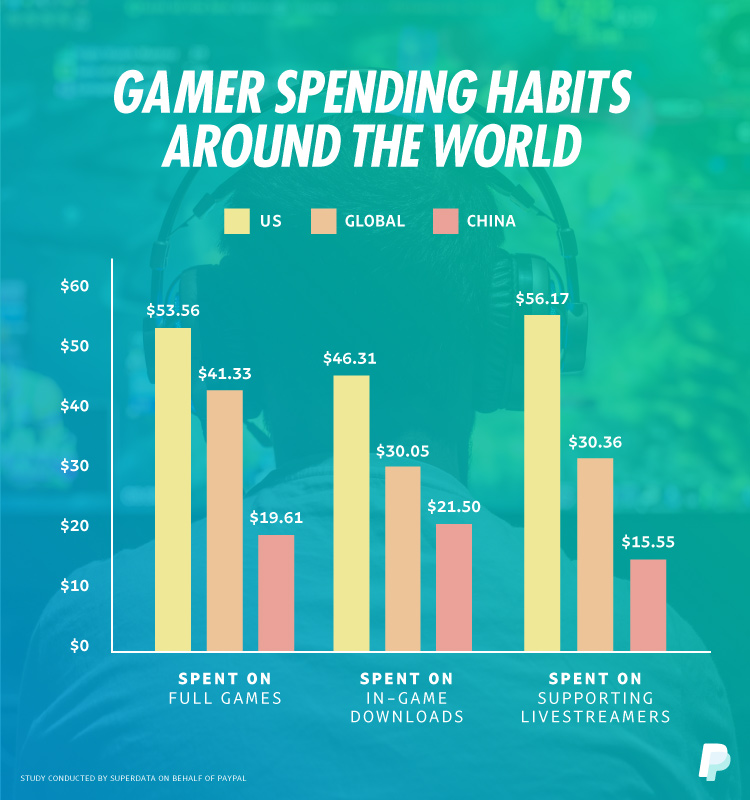 Above: How gamers spend

In the U.S., respondents surveyed purchased from 26 different gaming storefronts — the third most in the world, behind Russia (27), and Australia and Canada (28 each). While Steam is highly popular among millennials globally (31 percent buy from Steam), GameStop was resoundingly popular, with 45 percent of U.S. millennial respondents reporting shopping there for gaming content.

That means that, despite the move to digital purchasing, established retailers are still revered by a significant portion of the gaming industry, said Bello, who’s PayPal’s head of cross-border trade.

Respondents are selective about their checkout options: half of customers globally (and 44 percent in the U.S.) said they would walk away from the online sale if their preferred payment method is not offered.

While esports has seen an incredible explosion over the last year, only 15 percent of gaming video viewers (13 percent in the U.S.) have watched esports content. According to SuperData’s 2017 estimated esports revenue of $756 million, there is an incredible untapped potential for paid monetization of esports  content. This is particularly true among U.S. women, as only 6 percent reported engagement – compared to men, who had more than three times as many (19 percent).

PayPal said monetizing on video and esports is a huge opportunity that can be seized if customers are offered quick
and easy ways to pay for content.

In the U.S., livestreamers on sites like Twitch are roughly as influential as journalists when it comes to influencing purchase intent (15 percent vs 16 percent, respectively). However, YouTubers (27 percent) already far exceed journalists.

Players in both age groups (18-34 and 35-plus) have roughly the same trust in journalists, but younger gamers are far more likely to trust YouTubers (36 percent vs. 21 percent).

This study was conducted by SuperData on behalf of PayPal, between February and March, across 25 markets and approximately 25,000 active paying gamers globally.